Settlers of Catan Rewrote the Rules of Board-Game Culture

Board games for kids had monopoly until German game gave adults a turn.

Everyone grew up playing Monopoly and Clue—fun enough when you’re a kid—but the cycle of, wait-for-your-turn, roll the dice and take the obvious move, becomes a bit dull as you get older.

With the advent of video games in the 1980s with their faster action and visual engagement the old board games moved to the back of the closet and everyone thought that was the end of it, a nostalgic form of entertainment to trot out on holidays and reminisce over, like 1950s sitcoms.

But in 1995 a German board game called Die Siedler de Catan (Settlers of Catan in English) made it over to this side of the Atlantic.

That game caught people’s imaginations and started an interest in what has become known in the industry as “Euro” board games. From the late 1990s a growing group of gaming enthusiasts would diligently travel to Europe each year to see and bring back the new games that were launched at the big annual German games fair.  And from that process, board games are now beginning to re-emerge as a mainstream form of adult entertainment. 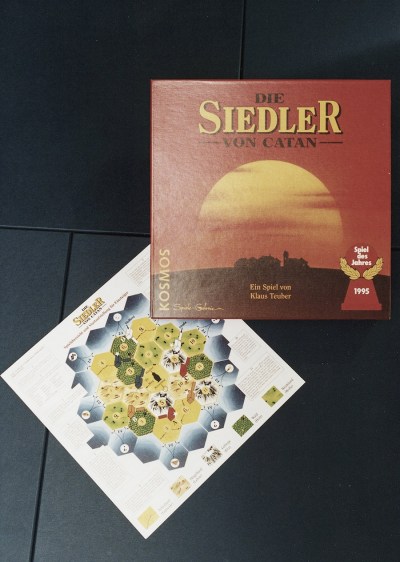 What did the German designers do differently? The answer can be found every Sunday afternoon when German families still traditionally spend time together playing board games.  It’s as much a part of the culture on Sundays as Americans watching a football game or the Spanish taking a siesta.

That cultural habit nurtured a much larger industry of games publishers who were focused on creating games that were appealing to the whole family.  Consequently, as classic board games languished in the USA and interest shifted to the arcade and video games among teenagers and young adults, games design evolved in Germany. And in the process corrected the faults of the classic games leading to the creation of new and better products.

At the heart of the change were three key developments, that are very evident in Die Siedler de Catan, and which are now pretty much a given in all modern board games:

Downtime is the word given to the time a player spends sitting around waiting for their turn to come around.  In Risk, for example, one could be waiting twenty minutes while someone amasses their army and plays out their turn.  In Catan, however, turns are fast and involve every player.  You roll the dice to decide which areas produce goods and everyone who has a settlement in those areas gains resources and can trade with the person whose turn is underway.  No matter whose turn it is everyone is playing all the time.

Most classic games have just one way to win, so there are few decisions, a high degree of luck and a uniformity in goals.  In Clue, a player rolls the dice and plods from room to room, asking the same question.  In Catan, there are choices—building settlements, amassing army cards, constructing the longest road or pursuing a negotiation strategy involving the trading of resources.  Each strategy is a little different and there is a sense of accomplishment in victory that is not just a matter of the luck of the dice going your way, but because you faced a choice of paths, assessed the lay of the land and decided to pursue an optimal strategy. The best man or woman really can win each game.

Who hasn’t sat through a three hour game of Monopoly where it was obvious in the first hour who was going to win?  Catan packs a lot of interaction, decisions and tension in one hour.  With modern board games you can now play three different games, all with different mechanics, in the same time it took playing one game of Monopoly, that you probably never even finished.

The board game world has enjoyed a renaissance since 1995, and now over one thousand new games get published every year with different designers having their own styles that enthusiasts follow.  The center of the board game world is still Germany, but designers from all over the globe bring their own cultural backgrounds to their games.  The Japanese make extraordinarily tight elegant games where every piece and move has a number of different ramifications, the Czechs make games with colorful themes and innovative mechanics and the French like games with negotiation and bluffing.

Which means the next gem you bring to the table could come from just about anywhere.

Rikki Tahta is a tech entrepreneur and avid board-game player. He just launched MeetMax Games, a line of smart games for corporate teams and events.