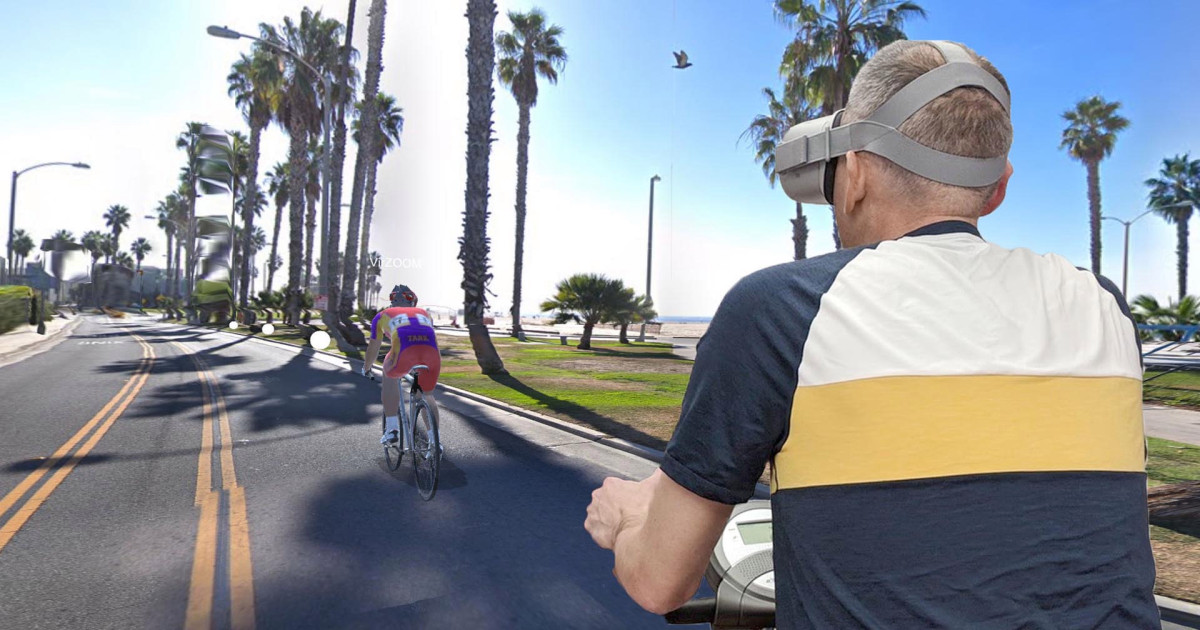 That stationary bike collecting dust in your basement?

It’s about to be the best workout you’ve ever had.

And that’s thanks to VZfit, a $99 device that turns your old exercise bike (or any stationary bike) into a gamified workout machine via the magic of virtual reality.

Play immersive, 360-degree shoot ‘em ups, virtually ride any street in the world and compete against other cyclists. All while you’re huffing and sweating your way through a workout, as we discovered in a recent test ride.

VZfit is new from VirZOOM, an exercise/tech company that launched in 2015 with a VR-outfitted folding bike. Now they’ve pivoted to tech and software that play well with virtual-reality sets already on the market, and paired them with stationary bikes because it’s pretty much the one type of exercise you can currently do safely with a headset on.

For now, you’ll also need an Oculus Go or Quest to work with the VZkit … although if you’re using a bike at a gym (instead of at home) that’s partnering with VirZOOM, they’ll probably already have a headset available. The kit might be available for other VR headsets down the road.

The “kit” is just a sensor you attach to the inside or outside of your bike’s crank arm, plus an “action button” to play, pause, set the volume etc. that you’ll mount under the thumb of your dominant hand. Connect with a VR rig and you’re ready to ride.

There are two versions currently available: VZfit Play is a gamified workout that transforms your bike into a tank, horse or Pegasus, upon which you’ll collect, shoot and outrun various obstacles and challenges, all by pedaling faster (or slower), leaning your head slightly to “turn” and using the action button to fire.

VZfit Explorer, meanwhile, allows you to ride anywhere in the world via virtual reality using Google Maps. You won’t be starting from scratch, though: the company starts you off with a list of suggested scenic routes, including Route 128 near the Colorado River, Carmel-by-the-Sea in California and Strada Statale 51 in Italy.

For both versions, there are opportunities to team up and compete with different riders online. One rep from the company suggested a large multiplayer game like “Fortnite but on a bike” could be possible in the near future, though we weren’t able to experience that during our 30-minute trial.

What we did find out: the Explorer biking routes were fine, though the software that was supposed to trick us into thinking we were going up or down hills didn’t really work (that may need a bit of manual bike adjustment to get you going). However, the games got our heart rate up in minutes; turns out “pedaling” around in a battle tank and shooting targets on a timer makes for a workout that’s equal parts engaging and strenuous.

VirZOOM has some stats to back ‘em up, at least when it comes to their older, VR workout cycles: VirZOOM-enhanced bikes are ridden over three days per week on average, versus one and a half for those without the VR. The average duration of a VirZOOM workout, meanwhile, is 38 minutes, compared to 21 for a regular stationary bike.