Your spots for guaranteed crowd-pleasing desserts

This holiday season, we’re voting for no more Santa crawls — and instead we’re trawling all corners of the DMV for award-winning pastries, pies, cakes and more. For those not leaving town next week — or anyone who doesn’t want to head home without a spectacular dessert wrapped up carefully in their luggage — below is a comprehensive list of DC’s best bakeries and the best of their holiday treats.

Called DC’s first real neighborhood bakery, Bread Furst is offering up “Everything but the bird” for Thanksgiving. It’s exactly what it sounds like — all the sides and all the desserts, including cornbread with heirloom corn from Garner’s Farm. And for Christmas this year, the Connecticut Avenue bakery (just north of the Van Ness Metro stop), will once again bake panettone, the traditional Italian Christmas dessert, “in an old world style,” says manager Scott Auslander. That means no commercial yeast: “Others do make panettone, but not with natural starter as we do,” he says of the mushroom-shaped dessert. Once TG is over, they’ll start making panettone with fruit that’s been soaking in rum for a few months. The bakery will also be serving up the traditional German dessert stollen this December. Restauranteur and Bread Furst owner Mark Furstenberg is a James Beard Foundation Outstanding Baker.

A two-time winner of the Food Network’s baking competition Cupcake Wars, Doron Petersan’s all-vegan bakery is offering up some fun food projects this season. There’s a fall-themed cookie decorating kit and ski chalet gingerbread house kit available through the holidays. In December, the bakery, with locations in the H Street Corridor (H Street Northeast) and Columbia Heights, will offer a winter cookie decorating kit as well as peppermint cookie and brownie kits. There will also be Hanukkah-themed cake pops. Plus, Sticky Fingers now ships baked goods all over the country; so, if you’d rather not haul a tin of cookies on the plane, you can have some vegan treats delivered to your out-of-town event.

Located inside the new-ish La Cosecha in the Union Market District, Taqueria Las Gemelas is serving up frozen carajillos, or Mexican coffee, this season. Beverage Director James Simpson says their version of the iconic drink is a “fun frozen twist” spiked with tequila, Borsci and Licor 43 along with cinnamon, cream and coffee from Counter Culture. “The carajillo is an iconic Mexican after-dinner drink, and the warming notes of the spices and coffee seem to hit the right notes of the shorter days and colder nights,” says Simpson. Available through mid-December, which is when they’ll likely introduce rompope, a Mexican eggnog.

If you need a little taste of NoLa this season, Chef David Guas is whipping up the traditional Christmas cake of New Orleans, the Creole Kringle Cake. The Danish-style pastry is made with a praline crunch, creole cream cheese filling and finished with a warm praline, glaze and roasted pecans. If you want pie, you can get that, too, at the Arlington, Va.-based Louisiana-style restaurant. Guas, a Food & Wine “People’s Best New Chef: Mid-Atlantic” nominee, is making a bacon, cayenne and pecan pie — smoky, salty, sweet and packed with a little heat.

This year, the gelato shop that that launched in Baltimore’s Fells Point — and now also has a bakery and cafe in Baltimore, as well as two gelato shops in DC, one in Bethesda, Md. and one in Reston, Va. — is debuting two new flavors for Thanksgiving and December’s holidays. Their pumpkin pie gelato, available through Thanksgiving, contains real pumpkin. In December, zabaglione will be scooped up. Pitango’s version of the Italian eggnog will be made with Marsala wine. For those looking for something warm, during the holiday months there will be “Sipping Chocolate” made from imported Italian chocolate, milk and organic cane sugar. Add a shot of espresso and you’ll be ordering a “Maracchino.”

Some sweet treats to grab for your Thanksgiving table

In Shaw, the Caramel-Mochaccino Icebox Pie is making its debut at Buttercream this season. Buttercream is currently running as a preorder-only bakery; while you can’t just walk in for a treat, you can pick up your order, by appointment. They haven’t released their December holidays menu yet.

On 8th Street in Southeast, this “globally inspired market and bakery” is focusing on what you’re going to eat before your Thanksgiving meal and also the following morning. Their “Thanksgiving Essentials” is a bread basket that’s all about breakfast (with a few items for the meal itself, like their pull-apart brioche). The Barracks Row bakery is serving kouign amann from Brittany, which manager Channing Hill describes as what you’d get if “if a croissant and baklava had a baby.” They haven’t released their December holidays menu yet.

Seen on Cake Boss, America’s Best Baker and Sugar Rush Christmas, Kareem Queeman, known as Mr. Bake, is whipping up his sweet potato cake for Thanksgiving, as well as banana pudding, which was just named one of Washingtonian’s top-10 feel-good dishes. For those who might want to take a few jars of Mr. Bake’s deliciousness home for the holidays, you can order now and swing by his shop on H Street Northeast for his “Sweet Potato Cake” in a Jar and Red Velvet Cake in a Jar, among others. 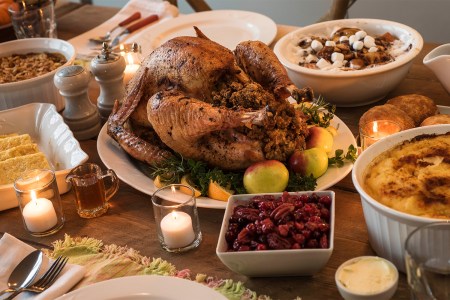