From dive bars to dinner spots, and everything in between

Baseball season is back, and thank the old gods and the new for that.

So the obvious question is … where’s the best place to get a drink before the game?

Take it from your correspondent, who once lived so close to the ballpark that I’d use the stadium’s wifi when mine was out: there are many to choose from.

After close examination, this is the winning baker’s-dozen of bars and restaurants, all within spitting distance of the stadium, roughly in order of preference.

Why here: Best views of the lot, plus early-morning openings on game days: See you at the beer garden at 10 a.m. this Saturday. May their AT&T-centric name forever pay tribute to all the wins of the pre-Oracle days.
Walking distance to ballpark: 7 minutes
Order: The cornmeal calamari or the spinach & fig salad, if you’re keeping it light.

Why here: Because your idea of the optimal pregame would be a six-sample flight of 21st Amendment’s justly renowned beer selection. There are a bunch of TVs if you’re slow off the mark, but they’re not so big they’d keep you in your seats.
Walking distance to ballpark: 5 minutes
Order: Solid bar food, like Sully’s cheese curds, with white cheddar cheese curds straight outta Wisconsin, watermelon beer, and the “Brew Free! Or Die” chili.

Why here: If you’d normally expect a more uptight atmosphere the closer you get to the stadium (and we do), Pete’s is the exception, with lots of seating and a remarkable-for-the-area level of conviviality from staff. Plus, the ballpark is literally across the street.
Walking distance to ballpark: 2 minutes
Order: Wings and/or the Bacon and Blue burger. 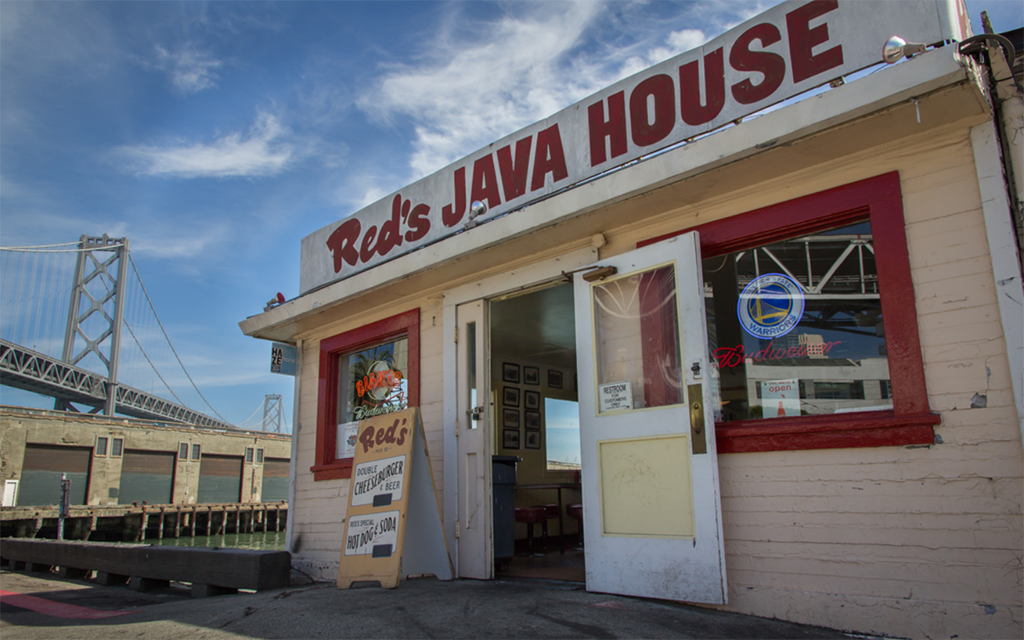 Why here: To know Red’s is to love it, a little slice of old(er) San Francisco (c. 1955) with killer views of the Bay. It’s slightly out of the way (see immediately below), but especially if game night is also date night, it’s a worthy stop. Extended hours (until 8 p.m.) when the Giants are playing.
Walking distance to ballpark: 10 minutes
Order: Garlic fries and the burger on sourdough

Why here: The menu’s tight, shall we say, with a familiar range of bar food classics (wings, calamari, chili and more cheese curds), but the vibe is pleasingly low-key and friendly even when it’s packed.
Walking distance to ballpark: 4 minutes
Order: The Tap burger with cheddar and a side of chili cheese fries

Why here: This is a great place to meet closer to work (or to a BART station). You’re here to drink in fine company, given a food menu that’s basically limited to hot dogs and beef jerky — and then walk off the buzz on the way to the ballpark.
Walking distance to ballpark: 19 minutes
Order: Quite possibly the “Malts of the World” whiskey flight, with samples from Taiwan, India and Wales. Or just a couple Coronas. Why here: It’s impossible to get any closer to the game — you can even order up to two drinks to take into the park. (They will be much cheaper than drinks inside — just warn the bartender ahead of time, so you get a cup back, rather than a glass.) It’ll be crowded, but that’s the point.
Walking distance to ballpark: 0 minutes
Order: Brats courtesy of 4505, plus your choice of specialty beers: maybe an Allagash Farm to Face, a sour blonde ale aged with peaches? Or a Belgian Boon Framboise?

Why here: Also extremely convenient to FiDi office workers, Steff’s is basically the opposite of/antidote to every overpriced SoMa restaurant charging $45 for a plate of offal. TVs above the bar, with larger screens on either end,
Walking distance to ballpark: 16 minutes
Order: The cheapest beer in the neighborhood. 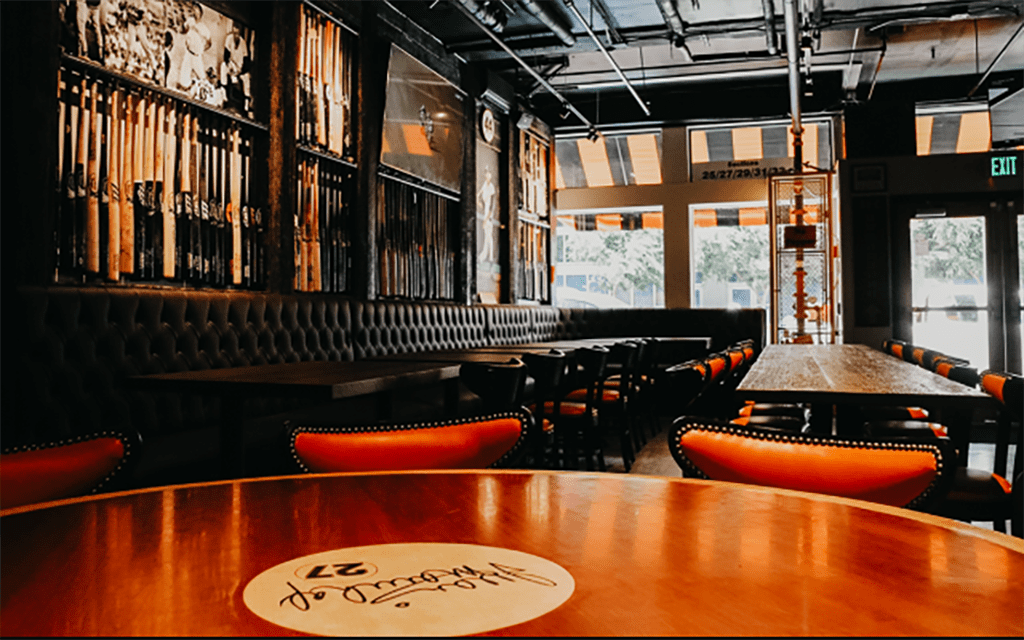 Why here: Pine Tar Grill loves them some Giants — it’s equal parts sports bar and shrine, with hundreds of game bats on display. Check out their Instagram for occasional game-day specials and various promotions, like $1 shots every time the Giants score.
Walking distance to ballpark: 20 minutes
Order: The Game Dog, with relish and red onions on an Acome bun.

Why here: Alchemist would make considerably more sense in other neighborhoods — but here, just outside the ballpark, it’s the unlikely cocktail bar in a sea of sports spots.
Walking distance to ballpark: 3 minutes
Order: Clearly a cocktail — maybe the “Somethin With Vokaahh” (with vodka, St. Germain, lime, thyme syrup and ginger beer) and a plate of tater tots, just because.

Why here: More of a dive-y live music venue than a ballpark bar, the Utah’s a quick walk to the stadium and, like the Alchemist, a welcome change of pregame pace.
Walking distance to ballpark: 11 minutes
Order: A basket of fries with garlic and parmesan and the chili, because that goes well together. 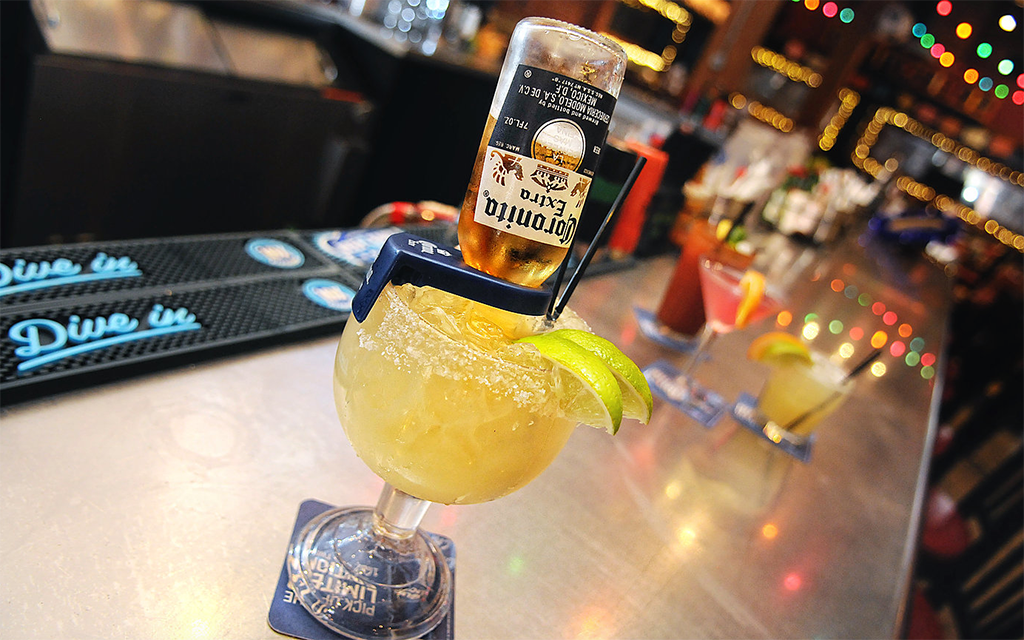 Why here: It’s basically impossible to be any closer to the ballpark while also being inside. Also, pitchers of beer. Also, it’s fun.
Walking distance to ballpark: 2 minutes
Order: It’ll probably be busy, so be prepared to order at the bar. And what to order? $33 pitchers of your favorite beer (Lagunitas? Guinness? Dos Equis?) and spicy cucumber margaritas, which is sort of like a bloody Mary if you think about it.