Did Antidepressants Play a Role in James Holmes’ Mass Murder?

James Holmes looks over advisement papers along with his attorney, Daniel King, during a hearing Tuesday morning June 04, 2013 at the Arapahoe County Justice Center. Holmes is accused of killing 12 people and injuring 70 others in a shooting rampage at an Aurora theater, July 20th, 2012. The court accepted James Holmes plea of not guilty by reason of insanity and has ordered a sanity evaluation at the Colorado Mental Health Institute of Pueblo. (Andy Cross/The Denver Post via Getty Images)
By Rebecca Gibian

James Holmes walked into a midnight showing of Batman at a movie theater in Aurora, Colorado in 2012 and coldly executed 12 people and injured dozens more.

He used an arsenal of weaponry he had gathered over the course of a few weeks. He even booby-trapped his own apartment to divert police resources while he launched the attack.

He went before a jury two years ago and was found guilty on all counts of murder and multiple counts of attempted murder. Before trial, he was evaluated by a number of psychiatrists, none of whom reached the same conclusion. There were diagnoses of schizophrenia, schizoid personality disorder, schizotypal disorder, or no disorder at all, according to the BBC. 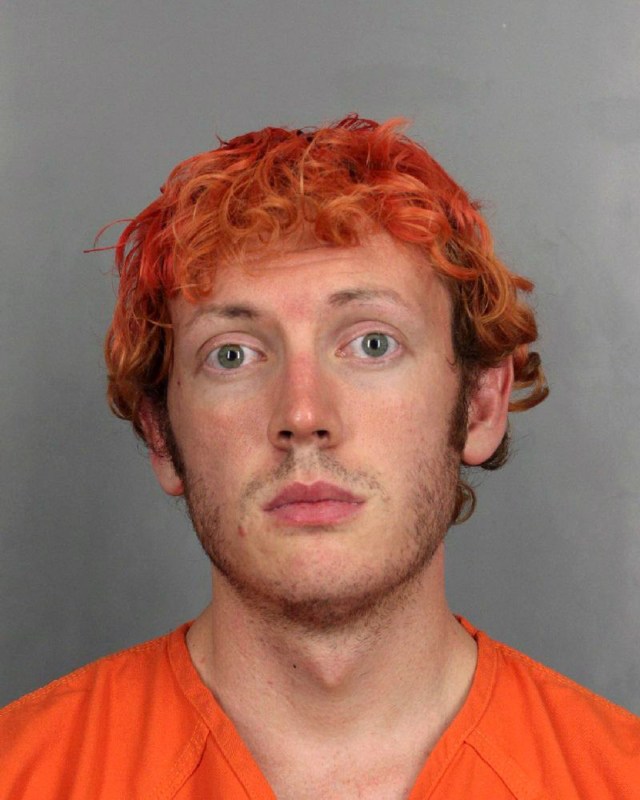 CENTENNIAL, CO – UNSPECIFIED DATE: In this handout provided by the Arapahoe County Sheriff’s Office, accused movie theater shooter James Holmes poses for a booking photo on an unspecified date in Centennial, Colorado. According to police, Holmes killed 12 people and injured 58 others during a shooting rampage at an opening night screening of “The Dark Knight Rises” July 20, in Aurora, Colorado. (Photo by Arapahoe County Sheriff’s Office via Getty Images)
Getty Images

BBC journalist Shelley Jofre wanted to learn more about whether or not Holmes’ antidepressants could have played a role in the mass shooting.

Jofre spoke to psycho-pharmacologist and long-time campaigner on the potential dangerous side effects of antidepressants, Professor David Healy, who was hired as an expert witness and had visited Holmes in jail before the trial. Holmes public defender wanted Healy to evaluate whether the antidepressant sertraline (also know as Zoloft), which Holmes had been prescribed, could have played any sort of role.

Though he was never called to give evidence at the trial, Healy told the BBC that, “These killings would never have happened had it not been for the medication James Holmes had been prescribed.”

Arlene and her husband Bob have avoided the press, but agreed to speak to the BBC. They struggled to understand how their son could have done what James did. Arlene says that James was never interested in drinking or drugs and never showed any signs of violence.

Time and again the phrase “socially awkward comes up when people, like his classmates, describe Holmes, but he did well in school until 2012, when he started to go downhill. An ex-girlfriend suggested he seek help from the campus student health center, and so Holmes went and met with psychiatrist Dr. Lynne Fenton on March 21, 2012.

James told Fenton he was having thoughts of killing people three or four times a day, and though that fact is alarming, Fenton didn’t regard him as dangerous at that point because the thoughts were abstract and there did not seem to be real intent. Fenton prescribed an anti-depressant, sertraline.

Four days after starting sertraline, during an online conversation with his ex-girlfriend Gargi Datta, James gave evidence that his thoughts of killing were turning real. He told her that he would increase his so-called “human capital” by killing people. Datta was asked in court if Holmes had ever said anything delusional before this online chat. She said he had not.

Two days after this conversation, Holmes returned to Fenton, and she doubled the dose of sertraline from 50mg to 100mg because he said that the medication hadn’t helped his obsessive thoughts. David Healy believes this made Holmes’ mental state worse, because when the drugs are causing a problem, “increasing the dose is a recipe for disaster.”

BBC reports that after this, the normally shy Holmes became bolder, texting a woman about the clothes she was wearing in class. Healy told BBC that this was further evidence that the sertraline was affecting Holmes.

When Holmes returned to Fenton, he did not tell her about his “human capital” idea. She upped his dose to 150mg. Healy believes that this is because it was not on her radar that the drug was causing any sort of problems.

By May, Holmes’ “human capital” idea got real. He started accumulating weapons and dropped out of school. He met with Fenton and a colleague, who were so concerned by his mental state that they offered to keep treating him free of charge, but he refused. Fenton contacted campus security and had them check his criminal-record and weapon-permits. He was given the all clear. He never mentioned his weapons collection or his plan.

He also stopped talking sertraline. Though it is impossible to tell when his final prescription ran out, the BBC estimates June 26. The shootings occurred July 20, and for some experts, that time gap is too big to blame the drugs. However, according to the BBC, the Royal College of Psychiatrists states “Up to a third of people who stop SSRIs have withdrawal symptoms which can last between two weeks and two months… for a small number of people they can be quite severe.”

After stopping the drugs, Holmes drastically changed again. He dyed his hair bright red, made a profile on a swingers’ sex website and started to draw detailed plans of the shooting in his notebook.

He began practicing shooting with the weapons he had bought by going to a shooting range in the Rocky Mountains. He also went to the cinema in Aurora.

BBC’s Jofre says that we may never know what Holmes was struggling with — whether it was mental illness, the side effects of his legally prescribed medicine or a combination of the two. What she does say is that she found no evidence that Holmes planned to murder before his started the medication, but that there is plenty of evidence to suggest his condition deteriorated rapidly once he started the pills.

Peter Tyrer, the expert on personality disorders, said that Holmes’ symptoms were right for prescribing sertraline. However, “with that sort of person… some of the underlying predispositions can come out more strongly, and in the case of Holmes these were very dangerous indeed.”

Holmes is now serving one of the longest prison terms in US history, 12 life sentences plus 3,318 years in prison. He barely escaped receiving the death penalty and is currently being held in solitary confinement at a maximum security prison in an unknown state, because the nature of his crimes make him a “target for other prisoners.”