Will White Claw Get Its Talons Into the UK This Summer? 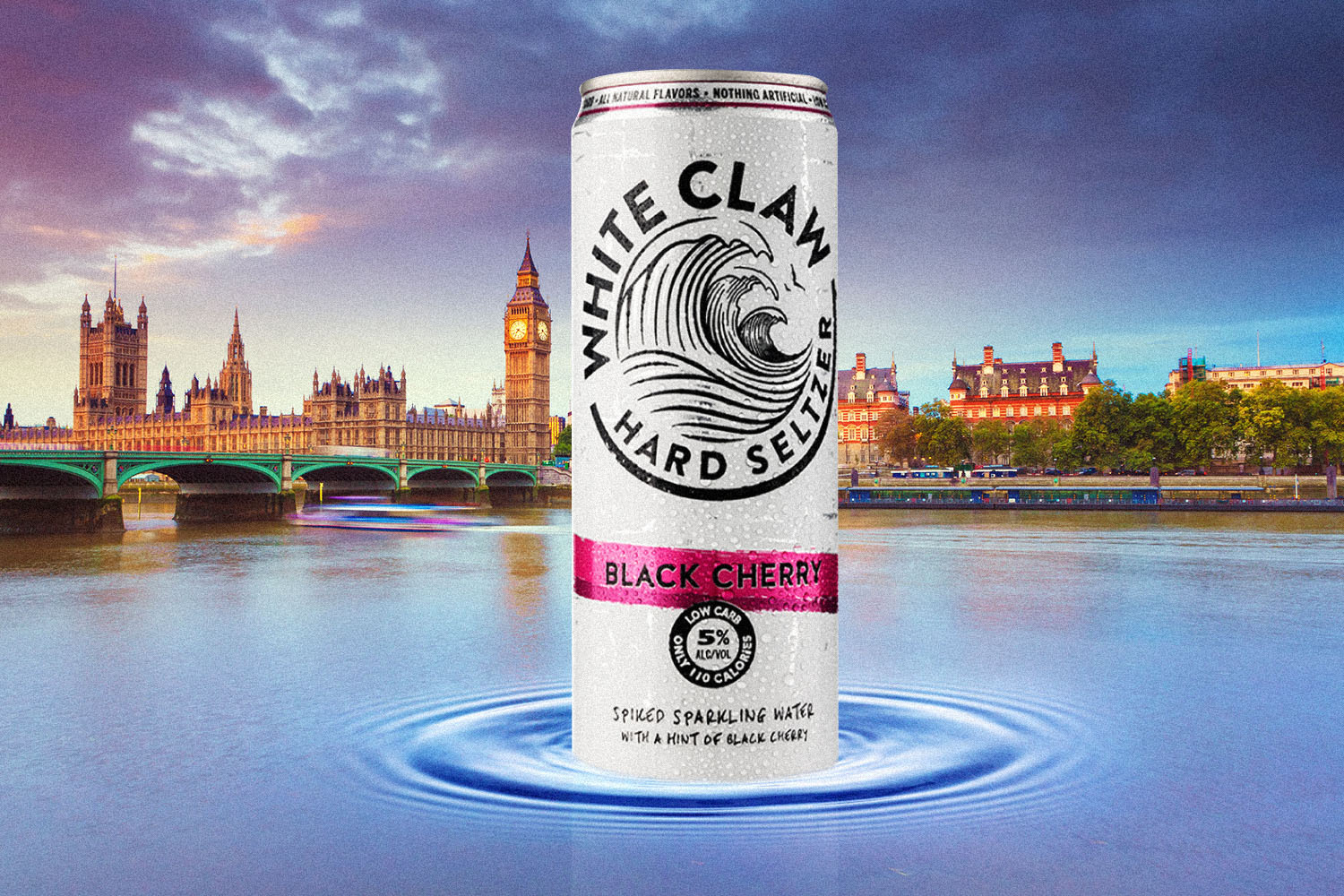 London has its eye on some alcoholic vaguely fruit-flavored goodness.
Getty Images
By Chris Cotonou / June 22, 2020 9:00 am

The North American White Claw has spread its wings over the Atlantic. It is currently perched around the booze aisles of British supermarkets, tempting shoppers with its low calories and exotic moniker: Hard Seltzer.

Starting this month, the drink that swept America is available in Great Britain and Ireland as part of the brand’s first big effort to expand into new markets. (It will also be available in Australia as of August.) Your Twitter friends might be complaining of a shortage at Wal-Mart — or an abundance of the Ruby Grapefruit flavor — but large volumes are now available in supermarkets across the pond: Tesco, Morrisons and Sainsbury’s. The brand hopes to replicate its success in 2019, where it single-handedly pioneered the Hard Seltzer category and saw a 300 percent increase in sales; along with its memeified pop-culture status and bootleg merch. But can the “Summer of the White Claw” (says The Atlantic) repeat itself on European turf?

I first walked the way of the Claw in San Francisco this past January. After an 11-hour flight from London Heathrow, my friend Emily offered a drink to help get me on my feet: “Let’s see,” rummaging through the fridge, “We only have White Claw.” After replying that I didn’t fancy craft beer, she said it was a Hard Seltzer. “Never heard of one,” I replied. She handed a can over, staring at me fascinated, as though I were trying food for the first time. It tasted fine, and more importantly, the morning-after bloat was gone. Over the three weeks that followed — on a diet of country sausage and Crunchwraps — White Claw was always there for me: guiltless, good, low-calorie, cheap. Oh, and everywhere: even the spit-and-sawdust dive bars on Ocean Beach. I was converted, and returning home, eulogized it to friends at the local pub, where the only alternative was a bitter diluted gin.

The Hard Seltzer category does not exist in Britain. This is like Coca-Cola hitting shelves for the first time, a rare chance for White Claw to insert themselves and thrive as the Hard Seltzer brand for a British summer. Culturally, we take a lot of cues from the United States. We also, and this is no secret, like to drink (a lot). Overall sales of alcohol have shot up 32 percent% during the pandemic, set to rise again as rules loosen.

According to David Nugent, CEO of Mark Anthony Brands International (who created the brand), “Making a decision to come to the UK was an easy one, as consumers familiar with the brand in the United States have made sure to have their voices heard on social media; demanding we bring White Claw to these shores.” This could be lucrative if the best arrangements are seen through.

Success in Britain will set the tone for whether they expand into other foreign markets, but White Claw has been awfully quiet about the whole thing. As of writing, all major U.K. cities are (rightly) in the midst of the biggest race conversation since 2011, and brands are having to reconsider their approach in service of solidarity. For their part, White Claw have made donations to the NAACP (the company was lambasted last year for tweeting support of “Blue Lives Matter,” although the company has been quick to point out that the image was fake, a doctored image of dubious origins). Still, this is unfortunate timing for a big brand launch. If it were a week or so earlier, when isolation was still very much the topic of the year, White Claw might have been all over our TV screens. But the Generation-Z target market is taking to the streets, and it ain’t a party. Then there’s the price: £2.50 ($3.20) per 12-oz. can. That’s almost the cost of three Bud-Lights at a London liquor store. You have to really like White Claw to justify that price, and we don’t (yet).

During my research, Google began targeting me with ads for other Hard Seltzer brands. Family-run Two Brooks Drinks, in particular, is one of a few British-based competitors — and it’s lower-calorie, to boot. Smirnoff has entered the British market with its own product priced at £1.80 ($2.30) and benefits from being a popular, trusted name. Likewise, Aldi, a low-price supermarket that will not stock White Claw, has announced it will launch its own take on hard seltzer, called Nordic Wolf (cool name) at just £1.29 ($1.63) per can. As Aldi’s Managing Director of Buying, Julie Ashfield, tells InsideHook, “With the rise of more health-conscious consumers, we wanted to cater for this market without compromising on price … we expect this new brand launch to be a hit, especially as summer heats up!” Tesco’s press team, meanwhile, tells me that they will be offering White Claw as part of a range of hard seltzers, suggesting they’ve been well-received.

There also seems to be a comical appropriation of White Claw’s branding across the category, with brands favoring a white background, obscure logo, random jab of color and creative attempts at gentrifying fruit (“Passion Star”; “Mango Hi-Ball”). Further, there will be no first-in advantage: all brands have hit shelves around the same time this June. Are they acting out of competitive urgency, or trying to ride White Claw’s wave?

Now, while all of this goes on, I can still guarantee — or strongly estimate — that most Brits will look at you with confusion if you ask for a “hard seltzer.” In a pub, you may even be met with two-word expletives not fit for writing. (I’m obviously quite happy to relive those guilt-free nights in California.) And yet, hard seltzers are still forecast to see the highest growth within the UK’s — and Australia’s — Ready-To-Drink category. It’s exciting: a new type of product is about to flood two continents, perhaps altering the market for good. David is optimistic: “UK retailers have been hugely supportive … Now we seek to lead the development of this entirely new market.” Time will tell if White Claw triumphs abroad as sultan of all seltzers, but it’s not doing itself any favors out of the gates: the product is more expensive than its competitors, and the cultish street cred it has in the States may not translate — the most politicized season in recent memory seems an unlikely time for young Brits to tweet out #WhiteClawSummer.

Still, at least someone’s getting in on the fun. On the Tesco website, the brand has earned its first and only review left by a single anonymous customer: “So refreshing,” they say of America’s outrageously popular Raspberry flavor. Five stars. It’s a start, I guess.