The Beer Drinker’s Guide to Thanksgiving

If I show up to your house for Thanksgiving and you’re only serving wine, I’m not going to be mad or anything. I’ll still drink, and I’ll still happily discuss the finer points of each bottle served, at least to whatever extent I’m even capable of discerning them (and probably a little bit further, for better or worse). But know this: I will also get considerably drunker than I intend to, which, frankly, is not great news for either of us.

This is because, while I like and enjoy wine a great deal, I’m not a real wine guy, which is to say I don’t really know how to drink it responsibly. Intellectually, I realize it’s way higher in alcohol than most beers, but that doesn’t make me any less prone to mindlessly and repeatedly taking giant gulps of whatever I have in my hand any time another human being tries to talk to me.

So if you’ll allow me, I’d like to offer up a Thanksgiving drinks menu consisting solely of beer. Even if you lack self control, you will likely remain sober enough to deal with your family, but you will definitely be drunk enough to, well, deal with your family. And maybe you’ll learn to appreciate the fact that beer and food can actually go together in some really interesting ways.

Amber Ales tick two boxes that are very important when it comes to Thanksgiving imbibing: they’re low enough in alcohol and subtle enough in flavor profile that, if you were looking for a single beer to drink all day long, from appetizer through dessert, it would serve you just fine. Bell’s version packs a punch of caramel malts that will stand up to the rich flavors of the day, but also enough earthy, mildly citrusy hops to cut through and make themselves known. If you don’t happen to have access to Bell’s, you’ll do juuuuust fine with some Fat Tire.

Ok, I promise, this menu isn’t going to wind up just being a long list of IPAs that are all exactly the same, because, yes, we’re all getting kind of sick of that whole thing. But I’m not kidding when I tell you that this beer, which boasts a significant malt bill to back up a very pleasant, pine-forward hopinesss, will do very, very well — like, mind-openingly well — with the salty meats and sharp cheeses we hope your hosts have laid out for you before dinner is served.

As noted above, people in craft-beer circles have been going batty for IPA in recent years — which is all well and good except for the fact that the craze has left certain very delicious styles out in the cold. Chief among them is the brown ale, which is like an even richer version of the Ambers I described above. You’ll get hints of brown sugar and chocolate, along with some earthy and herbal hops that pair brilliantly with some of the starchy and more intensely flavorful sides you’ll be dealing with. Breckle’s Brown is basically made to be consumed with sweet potatoes.

If the brown ale is playing up the deeper, richer flavors you’ll be experiencing with Thanksgiving dinner, this option, the saison, will play up the more delicate aspects. The sparkling effervescence of the saison, with its pear-like fruitiness and the earthy spiciness of its Belgian yeasts, will work nicely with turkey while still being substantial enough to stand up to the heartier fare. Sofie is an absolute classic that stands out from its competition thanks to a little bit of aging in white wine barrels that lends the beer a Champagne-like quality.

When it comes time for dessert, you’re gonna want to opt for something a bit heavier. And since we now know that Founders is run by a bunch of racist buffoons and we are thus unable to recommend their perennially excellent Breakfast Stout, we give you Java Head Stout by Troegs Brewing in Hershey, Pennsylvania. The coffee presence is huge, as is the chocolate, which, thankfully, bears no resemblance to the chalky, flavorless junk being produced by the international conglomerate just down the road. Get yourself a piece of pie and enjoy.

And, If You Must, a Nightcap: Brooklyn Black Chocolate Stout

Make no mistake about it: if you’ve followed us down this path, you are very much permitted to call it quits at this point. But if you are looking to have just one more beer, we’re gonna go to to bat for yet another dessert beer. Brooklyn Brewery’s Black Chocolate Stout is a monster at 10% ABV, with a pronounced presence of raw cocoa on the nose that somehow gives way to a delectable fudge-like quality on the palate. 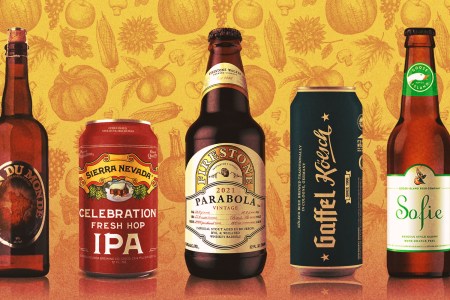