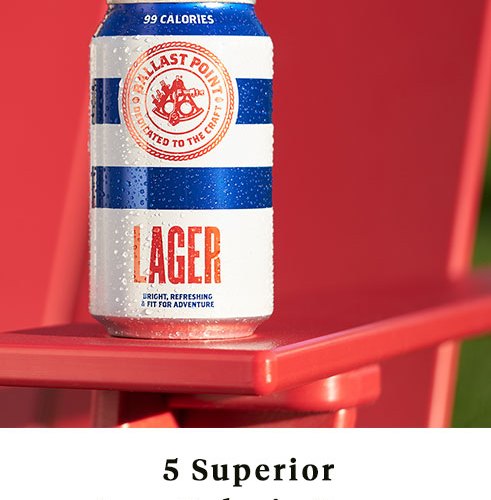 If you’re a regular drinker of craft beer, there’s a very good chance you’ve had more than your fair share of IPAs. And in the past couple years, if your local breweries have been keeping up with trends, there’s a very good chance many of those IPAs have been big ol’ 8% ABV tallboys of hazy, fruit-forward goodness — so delicious that you’re probably not stopping at one. Or at least we never have.

Well, newsflash: those things are fucking terrible for you. They take you from sober to drunk to hungover in the blink of an eye, and, even worse, they make you fat. A 16-ounce can of double IPA has somewhere around 300 calories. Drink two or three of those, then factor in all the shit you’re gonna eat ‘cause you’re drunk, and before you know it, you’ve already packed away a full day’s worth of calories.

In other words, there’s a reason light beer is so popular all over the country.

But there’s also a reason those beers don’t taste like anything. More alcohol tends to equal more flavor, which is why craft brewers have traditionally shied away from anything that would be considered a light beer.

There were signs when so-called “session” IPAs became popular a few years ago that the industry might be moving in a new, more health-conscious direction, but it didn’t quite take hold the way seems to be right now.

I’ve written before about how, for better or worse, groupthink has a way of dominating the top tier of the craft market, where none of the bigger breweries are willing to let a trend go by without jumping on it, for fear that one of their competitors will strike gold instead of them. And so as more and more chatter began to surface about a shift toward less calorie-dense and carb-heavy beers, brewers all over the country have been cooking up recipes and techniques that allow them to make said beers without sacrificing flavor.

From IPAs brewed with unorthodox ingredients to classic lagers and pale ales, not to mention all the great low-cal Goses that are already out there on the market, there’s a whole lot of really interesting stuff that’s set to make those long days of summer drinking less hard on your body.

Leave it to Sam Calagione and the crew at Dogfish Head to solve low-cal/low-taste conundrum by using an ingredient no one’s ever thought to put in beer: monk fruit. As they describe it, IPAs are generally brewed with a ton of malt, which ultimately leads to unfermentable sugars and a higher calorie count. Because monk fruit provides body and sweetness to Slightly Mighty, it can be brewed with considerably less malt so the hops can really shine. What you’re left with is a tropical, citrusy thirst quencher that more than lives up to its name.

Of the five beers listed here, this is the one to bring to the person’s house who still drinks Bud. It’s a traditional style that everyone knows, but it’s elevated far above all the macro crap. It’s pours a clear, golden yellow, and it’s got a nice brightness to it that’s then smoothed out by Apollo hops, which provide an unmistakable banana note. (An yes, I’m aware every person who drinks Bud was just immediately grossed out when I said “banana note.”)

Must admit, I was unexpectedly floored by this one. It’s essentially a super-sessionable version of a big, Northeastern IPA, which is to say it’s got huge citrus and tropical notes, very low bitterness, and a mouthfeel that’s nice and creamy without being heavy. But, as floored as I may have been by its taste, I was doubly so by it’s ingredient list, which includes sea salt, buckwheat and chia. Hmm. Whatever’s in there, it’s working.

When Sixpoint released Jammer a few years back, they doubled down on the fact that it was a gose, a traditional German style characterized by significant sourness and a pronounced salinity. Purists balked, claiming there wasn’t enough of either of those two qualities. But regular folks, non-beer nerds, were smitten with what was essentially a pleasantly fruity, slightly sour beer that could be positively crushed. Or jammed, I guess. So Sixpoint has rebranded it as a “tangy session beer,” which sounds about right, and they’ve also released a bunch of new variations, like Grapefruit & Tangerine and Cranberry, Raspberry & Strawberry.

This one’s admittedly a bit of a stretch, as 140 calories isn’t particularly low, but what’s most impressive about it is that it somehow clocks in at less than 4 grams of carbs, which is basically the same as that absolutely undrinkable Michelob Ultra garbage. So you’re getting a good, hearty amount of alcohol, and an outstanding example of one of the craft world’s other dominant trends of the past year or so, the Brut IPA, where the beer is brewed with Champagne yeast to add a dry character that allows the hops to really shine. And boy, do they. Expect old-school west coast flavors of pine and grapefruit.

Review: The New Jack Daniel’s Release Comes With an Actual Warning
Is the "Vertical Kilometer" the World's Toughest Race?
The Cola-Flavored Beer From Goose Island Is Surprisingly Great
Neil Patrick Harris on the Art of Magical Holiday Gifting
Why Gen-Z and Millennials Don’t Like to Say “You’re Welcome”
What We Learned From Watching “The Beatles: Get Back”

What We Learned From Watching “The Beatles: Get Back”
Why Do I Feel So Weird About Dave Grohl, Who Isn’t Jewish, Doing Annual “Hanukkah Sessions”?
How a Nepali Climber Shattered the Record for Summiting the World’s 14 Tallest Mountains
Review: Somehow, Coors Just Released a Very Good $60 American Whiskey