Adam Schlesinger of Fountains of Wayne during Bonnaroo 2007 - Day 2 - Fountains of Wayne at This Tent in Manchester, Tennessee, United States. (Photo by Jason Merritt/FilmMagic for Superfly Presents)
Getty
By Bonnie Stiernberg @aahrealbonsters

In some ways, it feels a little cruel that so many of Adam Schlesinger’s obituaries list “Stacy’s Mom” in the first line.

Yes, the songwriter and co-founder of ’90s/’00s power-pop group Fountains of Wayne — who passed away due to complications from COVID-19 on Wednesday at the age of 52 — is probably best known for the massive 2003 hit. But Schlesinger’s career extended far beyond that single to the screen, including everything from “That Thing You Do!”, the theme to the Tom Hanks movie of the same name, to songs for television shows like Crazy Ex-Girlfriend, Sesame Street and Saturday Night Live.

He was an EGOT nominee (meaning his songs earned him nods for Emmys, Grammys, Oscars and Tonys) as well as a Golden Globe nominee, and he won three Emmys and a Grammy. But even without all the accolades, his talent was undeniable; simply put, no one could write a pop song quite like him. You are, undoubtedly, familiar with his work — you just may not realize it. Check out 20 of his most essential tracks below.

“Prom Theme” is a bittersweet ode to adolescence that anyone who’s ever graduated high school can relate to. It doesn’t look at things through rose-colored glasses (sample bummer lyrics include “Here we are at last/the moment soon will pass/we’ll go our separate ways/we’ll vanish in the haze/We’ll never be the same/We’ll forget each other’s names” and “Soon we’ll say goodbye/Then we’ll work until we die”), but it’s also willing to celebrate the moment, concluding, “But tonight we feel like stars/We’ll play our air guitars/Cause we’re 18/It’s a perfect night/To sing our prom theme.”

Real Fountains of Wayne fans know that by no means did it all start with “Stacy’s Mom.” 1996’s “Sink to the Bottom” failed to chart in the US, but the song — which features all the fuzz and power chords you’d expect from a ’90s rock radio hit — made some noise overseas, peaking at No. 42 on the UK charts and climbing all the way to No. 7 in Norway.

“Denise” combines Fountains of Wayne’s love of power-pop with its sense of humor, as the narrator describes the object of his affection with astute lines like “She drives a lavender Lexus/She lives in Queens, but her dad lives in Texas” and “She works at Liberty Travel/She’s got a heart full of gravel.”

This fan-favorite Fountains of Wayne track finds our hero getting an ill-advised tattoo in an effort to impress a girl, wondering “I”m fit to be dyed, am I fit to have you?”, asking “Will you stop pretending I’ve never been born? Now I look a little more like that guy from Korn” and urging her to inspect it in all its cringe-worthy glory, nudging, “If you came a little bit closer, you’d see it isn’t painted on.”

Imagine, for a second, the immense pressure of being tasked to write a song like “That Thing You Do!” The song is supposed to be a catchy, Beatles-esque ’60s pop track capable of catapulting the fictional Wonders from Eerie, Pennsylvania to the top of the charts. It’s not just the centerpiece of the movie; it’s the entire premise for the movie, and as such, it has to be believably great. Schlesinger, of course, rose to the occasion, delivering one of the best songs written for a fake band ever and earning an Oscar nomination for the track.

Sung by Letters to Cleo frontwoman Kay Hanley, “Pretend to Be Nice” from the Josie and the Pussycats soundtrack is another case of Schlesinger delivering a hit for a fictional band rising to superstardom. It’s used in a montage that sees Josie and the Pussycats recording a music video, posing for photo shoots, gracing magazine covers, signing autographs and watching their song climb the charts, and like “That Thing You Do!”, we buy it.

It’s impossible to choose just one of the songs that Schlesinger co-wrote with Rachel Bloom and Jack Dolgen for Crazy Ex-Girlfriend; there are 157 of them, and they’re pretty much all spot-on. In order for a song parody to work, it has to actually sound good and be true to the form it’s spoofing, and Schlesinger’s musical chops shine through on everything from the Gentlemen Prefer Blondes sendup “The Math of Love Triangles” (above) to the ABBA-esque “First Penis I Saw” or the Phil Spector-influenced “Maybe She’s Not Such Heinous Bitch After All” and the Fred Astaire-era Hollywood musical parody “Settle For Me.”

A Colbert Christmas, “There Are Much Worse Things To Believe In” (2008)

Schlesinger wrote eight songs for Stephen Colbert’s 2008 Christmas special, A Colbert Christmas: The Greatest Gift Of All! that were performed by the likes of Willie Nelson, John Legend and of course, the host himself. This duet between Colbert and Elvis Costello earned Schlesinger an Emmy nomination in 2009.

In addition to his time with Fountains of Wayne, Schlesinger spent the latter half of the ’90s collaborating with Andy Chase and Dominique Durand in the indie-pop group Ivy. All of 1997’s Apartment Life is worth a spin, but you should absolutely start with the dreamy “I’ve Got A Feeling.”

The Tinted Windows supergroup saw Schlesinger team up with other pop -rock heavyweights like Cheap Trick’s Bun E. Carlos, Smashing Pumpkins’ James Iha and Taylor Hanson (of Hanson). It’s a weird combination, but it works, and “Messing With My Head” is pure Schlesinger.

Aside from “Stacy’s Mom,” “Hackensack” is probably Fountains of Wayne’s best-known track (thanks in part to being covered by Katy Perry). It’s a lovely, wistful tale of a lonely Jersey narrator stuck in his hometown while pining for a former classmate who managed to get out. Like much of Schlesinger’s work, it manages to perfectly toe the line between sad (“I used to work in a record store/Now I work for my dad”) and clever (“I saw you talkin’ to Christopher Walken on my TV screen”).

Schlesinger earned two Tony nominations (for Best Musical and Best Original Score) for the music he wrote for the musical adaptation of the 1990 John Waters movie Cry-Baby. It’s easy to see why those Broadway parodies came so naturally to him on Crazy Ex-Girlfriend; he could do the real deal, with the same humor that’s present in all of his work.

The 2007 Drew Barrymore and Hugh Grant rom-com Music and Lyrics, in which Grant plays a past-his-prime pop star, never quite found its way into the zeitgeist the way one might expect it to on paper. Schlesinger’s contribution is central to the movie’s plot: it’s the song Grant and Barrymore’s writer character are tasked with penning for a contemporary pop star (while, naturally, falling in love.)

“All Kinds of Time” is all about youth, dreaming and that reassuring feeling that your whole life is ahead of you. It’s told from the perspective of a high-school quarterback, and while it starts out ominously (“the clock’s running down, the team’s losing ground”), our hero eventually comes to the zenlike realization that he’s “got all kinds of time.”

The title track from Fountains of Wayne’s concept album about dead-end suburbia, named for a real street in Queens, is about an aimless guy playing in a cover band waiting for his big break, hanging flyers around town, saving money for a custom van and declaring that “they’ll never know what them when I come.”

“Fire Island” is arguably the most tender song about an out-of-control high-school kegger you’ll ever hear. Schlesinger paints the picture as only he can, noting that there are teens “driving on the lawn, sleeping on the roof” and even “feeding chocolate to the dog,” but instead of presenting it as an up-tempo rager, he makes a line like “all the kids from school will be naked in the pool while our parents are on Fire Island” sound positively wistful.

Schlesinger penned this hit for Boston’s The Click Five in 2005, which peaked at No. 11 on Billboard’s Hot 100 chart — which, interestingly, makes it his highest-charting song, ahead of even “Stacy’s Mom.” Come for the aughts-era pop-punk, stay for killer lines like “She laughs at my dreams/ But I dream of her laughter.”

His Fountains of Wayne bandmate Chris Collingwood once said that the best way to tell which of the group’s songs were written by Schlesinger was to listen for the ones about New Jersey and/or high school, so it makes sense, then that Schlesinger also wrote this Bowling For Soup track that examines all the ways the tropes from our formative years stay with us long after we graduate.

“Someone to Love,” from 2007’s Traffic and Weather is essentially the band’s take on “Eleanor Rigby.” It follows a bunch of lonely sad-sacks stuck at home, doing things like calling their parents, listening to Coldplay (yikes) and curling up with a book about organized crime, but it offers a word of encouragement in the chorus: “Don’t give up, one of these nights you might find someone to love.” 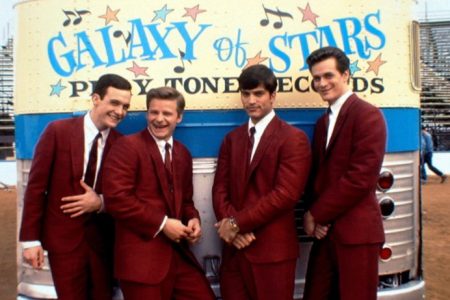 “That Thing You Do!” Cast to Reunite for COVID-19 Relief Fund