We caught up with the Chicago author, illustrator and "New Yorker" cartoonist

Sophie Lucido Johnson is an author. An illustrator. A newsletter writer. An oversharer?

You may have seen her work in The New Yorker, subscribe to her popular Substack (“You Are Doing A Good Enough Job”), listened to her Audible book Love Without Sex and most likely seen her books — Many Love: A Memoir of Polyamory and Finding Love(s) and Dear Sophie, Love Sophie — proudly on display at your favorite indie bookstore. And even if you have no idea who Johnson is, you may have guessed from the titles of her work that she incorporates her personal life into her professional work.

The Chicago author took some time to examine the big questions (why do we do what we do?) and some bird questions. Johnson draws a lot of birds.

InsideHook: I love your work because I can see myself in it. Do you find yourself taking notes in the moment? Is it obvious when you’re going to turn a real life moment into an essay or piece of drawn art?

Sophie Lucido Johnson: This is a great question, because I wasn’t 100% sure how to answer it — it’s not consistent! I think the thing that feels most accurate is the analogy of filling and emptying of wells: Filling the well involves having experiences, going places, doing things and having conversations with people. Emptying it involves creating, writing, drawing, making. I need to have both these things working in balance in order for my work to really be doing what I want it to do. So, generally, I’ll make an effort to do new things and fill a whole day with experiences or conversations; then I take a long walk and “have a think.” The thought goes like this: “What has been popping up in my conversations lately? What do I notice I’ve been noticing? What has been on my mind? What’s been making me angry? What do I find myself believing strongly?” It requires a thought like this to figure out how to empty the well; then I brainstorm in an Evernote doc; and then I write. So I don’t know that I’m ever in a given moment like, “I’m going to make something about this.” But on the other hand, I’m always generally like, “I’m going to make something about this!”

Have any of your family members or students asked to be in your work? Or not be?

People are way more likely to ask not to be. I have learned to ask everyone if I can include them in a piece of writing, even if I’m just alluding to something we did together. I always offer to change names; sometimes people take me up on that. I don’t think anyone has ever asked me to make something about them! I wonder how I would react if they did ask!

The thing people do sometimes is offer New Yorker cartoon suggestions, which is always tough, because they’re basically never good. To be fair, most of my own New Yorker cartoon pitches are also not good. But I’ve been practicing not being good for literally hundreds of hours. So I’m slightly less not-good.

Are you finding a parenting community in the same way you found a poly community (is that the right term) after your first book?

I am finding a parenting community the way I think most people find parenting communities, which is that I have a baby, and I see other people who have a baby, and we start talking to each other. All my parent friends live in my neighborhood. Someone will be walking by my house with a stroller and I’ll stop them and say, “Hi! My baby is a little bigger than your baby; can I have your number so that I can pass down our old jackets?” And then suddenly I have enough parent friends to populate a Christmas party. This is not at all the way I found a poly community (that’s the right term). People so rarely walk down the street holding hands and/or making out with two different people at once. 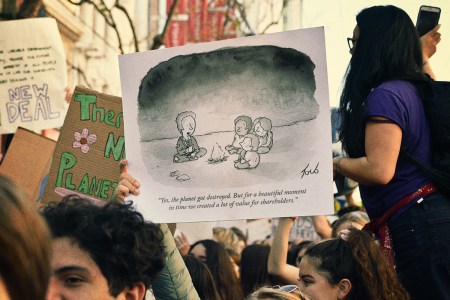 If you didn’t have your Substack, would you be producing this much?

Probably! But I don’t think I’d be as happy about it. I think writing a newsletter for thousands of people has always been my life goal, and I was born at exactly the right time to make this realistic. Another time that would have been conducive to this kind of output would have been the early 1900s, when most Americans read multiple newspapers per day, and you could mail a newspaper for a 1.5 cents (versus, like, six cents for a letter). The internet tells me there were more than 30,000 print newspapers at this time. On the other hand, in 1900, people would have been so scandalized by a lady journalist spouting off nonsense (let alone a polyamorous one!), so it’s probably for the best that I’m living in the age of Substack. I have a small-but-mighty readership that makes me feel better about humanity in general. I like being a part of a smaller internet.

How much of an average New Yorker magazine do you actually read?

I read The New Yorker backward. I start with the caption contest, then read the magazine back to front, stopping for all the cartoons and poems. As I’m stopping, a sentence might catch my attention. If that happens, then I’ll read the whole paragraph. If I like the paragraph, I’ll keep reading that story, or maybe flip to the beginning of the story and read the whole thing. I go through the whole magazine like this, always skipping Talk of the Town (borrrring), and always finishing with the restaurant review (fascinating). So I’d say I read about 38% of The New Yorker. Or, if we are using The New Yorker‘s style guides, thirty-eight per cent.

How does Chicago impact your work?

As you know, Brandon, I love Chicago. And I think it probably impacts my work by giving me the writing schedule I have.

I do so much of my writing on the Purple Line train in the morning— it’s exactly an hour commute from my house to the Art Institute, where I work three days a week. I feel like I have enough free time to write here. There is space. There are tables at coffee shops where you can spend hours without being asked to move, and lots of libraries. I like to write under trees or while sitting on the beach. I like that Chicago has the resources of a big city, with the stretchy quiet of a suburb. I have also met all my creative partners here — my New Yorker writing partner Sammi Skolmoski, who is a specifically Chicagoan weirdo; and my colleagues at The Office of Modern Composition, Jill Riddell and Raghav Rao. These Chicago-y people have made my work exponentially better. You know, the best underground comics artists ever (and this is objectively true) lived in Chicago — like Chris Ware, who is the greatest human artist alive. (He curated this show for the Chicago Cultural Center, proving that cartooning was really invented here.) Chicago is perfect for quiet, antisocial oddballs. I identify.

Can you please do your best to explain your love of birds?

In New Guinea, there is a bird called the Vogelkop bowerbird, which spends months or longer curating a totally individual bower — basically an elaborate structure of sticks — filled with perfectly sorted ephemera (bright orange fungi, hot pink flowers, green-shelled beetles), and uses it to seduce female birds, who choose their mates based on shared aesthetic preference. In Australia lives the lyrebird, who can sound exactly like a chainsaw, a camera with a motor drive or a hoard of laughing children. Crows in Japan have learned to drop walnuts on busy city streets — and specifically on crosswalks — so that cars can drive over them and crack them open and stop at the stop lights, allowing the crows to walk into the crosswalk to collect the spoils. Pigeons can identify cancer cells with better accuracy than actual cancer doctors. I could go on and on. Some of this stuff is more incredible than even the best science fiction writing — and it’s real! We share the earth with these creatures! Every day, we take for granted that there are hundreds of thousands of species of flying animals with mysterious abilities that scientists don’t fully understand, and they’re just there for us to look at. The world gets fantastical when you fully come to realize this. And who wouldn’t want to live in a world with real-life magic? People who aren’t obsessed with birds are just leaving free good stuff on the table.