MoMA Proves ‘B’ Is Still for (Humphrey) Bogart

1951: American actor Humphrey Bogart carrying a gun and holding out his hand, in a still from director Bretaigne Windust's film, 'The Enforcer'. (Photo by American Stock/Getty Images)
By Sean Cunningham 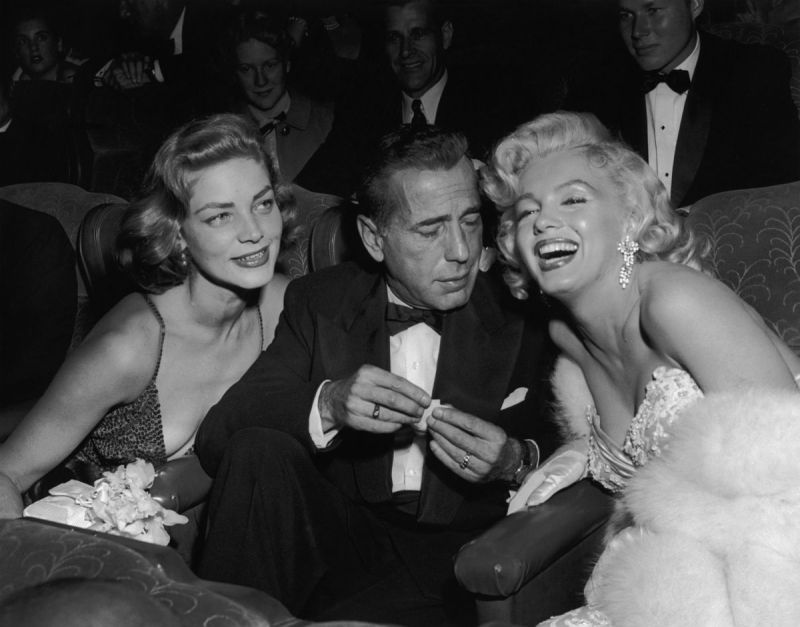 Married actors Lauren Bacall (left) and Humphrey Bogart pose with Marilyn Monroe at the premiere of director Jean Negulesco’s film, ‘How to Marry a Millionaire.’ Bacall and Monroe co-starred in the film. (Darlene Hammond/Hulton Archive/Getty Images)

Bit of movie trivia: the actor George Raft nearly wound up starring in High Sierra, The Maltese Falcon, and Casablanca. These three roles all wound up going to Humphrey Bogart and are crucial in making him a film icon—so revered that he’s key to classics in which he technically does not appear, like Jean-Luc Godard’s Breathless. Indeed, Raft’s final film appearance was in a 1980 movie titled The Man with Bogart’s Face, filmed decades after Bogart’s death in 1957 at age 57.

Until October 28, New York’s Museum of Modern Art will be looking back at Bogart’s remarkable career. Born in 1899, his first film came in the 1928 short The Dancing Man, and his final screen appearance was in 1956’s The Harder They Fall. In between were classics like 1946’s The Big Sleep, 1948’s The Treasure of the Sierra Madre, and 1951’s The African Queen (for which he received his only Oscar). Despite being over 40 before he found film stardom and hardly looking like the average matinee idol (he stood 5’8″ and had some hairline issues), Bogart brought a remarkable cool to his roles (particularly when playing a private eye), and his chemistry with Ingrid Bergman in Casablanca still sets the standard for onscreen romance.

For more information on the MoMA’s “B Is for Bogart,” click here. Watch the original trailer for Casablanca below.