10 Iconic Sunglasses From the Movies and Where to Buy Them

How to rock shades like Steve McQueen, James Bond and the Dude 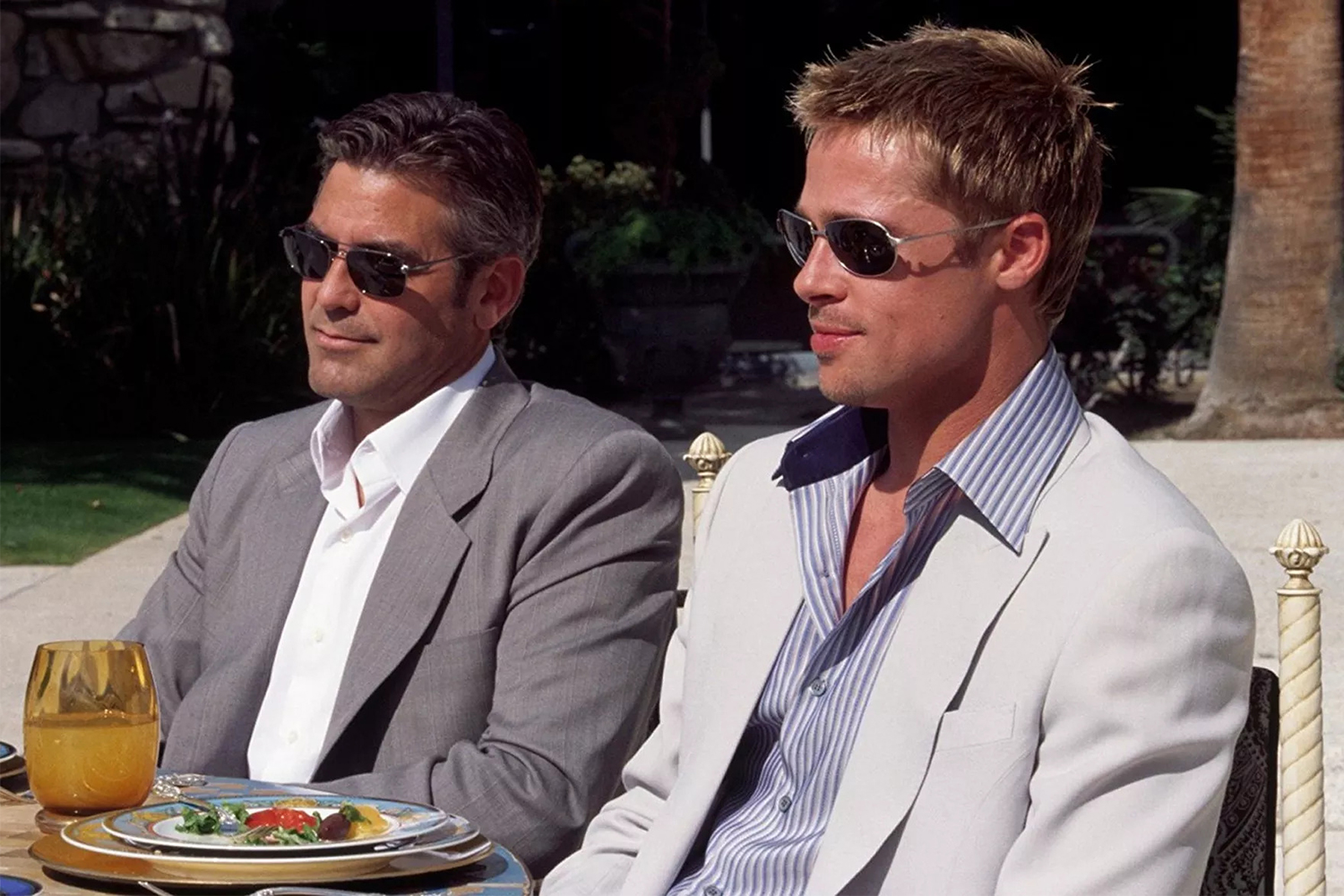 Our list of the 10 most iconic men's sunglasses (you can buy) include shades worn by George Clooney, Steve McQueen and more.
Warner Bros. via IMDB
By Alex Lauer / May 20, 2019 8:00 am

Generally, we don’t recommend copying outfits from movies. Wear Ryan Gosling’s Drive bomber and eyes will roll behind your back. A red puffer vest and they’ll ask, “Where’s Doc?” Translucent raincoat and you’re a social pariah.

The one exception: sunglasses.

They’re inconspicuous enough that wearing them recalls the memory of leading men without anyone calling you out for cosplaying.

To outfit you for summer, we’ve rounded up 10 of the most iconic movie sunglasses, with two caveats: you must be able to pull them off and actually buy them. (Which is why you won’t find Neo’s custom Blinde Design Project shades or Tyler Durden’s Elton-esque Oliver Peoples on our list.)

What you will find? Eyewear made famous by Steve McQueen, James Bond and the Dude. And if you don’t like any of them, that’s just like, your opinion, man.

Who wore them: Jeff Bridges as Jeffrey “The Dude” Lebowski in The Big Lebowski
What you need to know: These puppies, like all of Vuarnet’s shades, are made in France and feature mineral lenses (and can apparently survive a dip in the toilet.) The brown colorway closest to the ones in the film is sold out at the moment, but there are 10 other options available — and we’re thinking the 2019 Dude would dig tortoise.
Watch them in action

Who wore them: Johnny Depp as Raoul Duke in Fear and Loathing in Las Vegas
What you need to know: There are more obvious Ray-Bans to choose from (some of which we recommend further on), but no one’s going to pick you out from a crowd in a pair of Wayfarers. The Shooter is a style magnet, even if people don’t know what that little hole in between the eyes is for (the “vanity bullet hole” was supposedly a place for hunters to hold their cigarette when both hands were needed, but isn’t that what mouths are for?). As for the yellow lenses, they were custom. Don’t be fooled by $17 costume accessories.
Watch them in action

Who wore them: Daniel Craig as James Bond in Spectre
What you need to know: Craig has worn multiple pairs by Tom Ford during his tenure as the secret agent (in fact, the designer and costume designer Jany Temime dressed him in everything from tuxedos to knitwear), but not all of them are equally suitable for the average gent. Case in point: the FT108 from Quantum of Solace. The Snowdon, however, is eminently pull-off-able. If you want authentic Bond, get it in Dark Havana, but the various black colorways will suit you just as well.
Watch them in action

Who wore them: Steve McQueen as Thomas Crown in The Thomas Crown Affair
What you need to know: These are a relatively recent reissue of quite possibly the most famous sunglasses on this list. According to Persol, they were “the first-ever folding glasses” when they were introduced in the ‘60s, but when McQueen catapulted them to fame in ‘68, it really didn’t matter if that was true or not. Make sure to grab ones with blue lenses.
Watch them in action

Who wore them: Ryan Gosling as Driver in Drive
What you need to know: Don’t be fooled by the GeoCities nature of Selima’s website, this is the exact style Gosling wears while stunt driving and casually riding elevators in Nicolas Winding Refn’s breakout film. Like Vuarnet, these are handmade in France (and though you may have not heard of the boutique, they’ve designed custom frames for everyone from Bono to Madonna). And if you want to look just like the Driver, grab them in Auburn Tortoise.
Watch them in action

Who wore them: Tim Roth as Mr. Orange in Reservoir Dogs, Matthew Broderick as Ferris in Ferris Bueller’s Day Off (in the 1961 Ferrari 250 GT California no less)
What you need to know: There’s only one other Ray-Ban silhouette that’s starred in more movies than the Clubmaster, but even so, we probably missed one of your favorite films in the list above. If you want to replicate these styles, go for classic black frames with the green G-15 lenses (first used for military purposes). If you want something a bit different, try the silver aluminum style, which is reminiscent of Michael’s pair in The Lost Boys (though technically those are a defunct style from Artcraft called Clubman).
Watch them here

Who wore them: Eddie Murphy as Axel Foley in Beverly Hills Cop and Beverly Hills Cop II
What you need to know: We’re slightly bending our own rules with this one because technically Porsche Design doesn’t make the Carrera sunglasses anymore. But you will find plenty of vintage finds in good condition on eBay if you’re looking for 100% ‘80s authenticity (and sports-car naming scheme). If being fresh out of the box is higher on your list of priorities, the P’8478 is available in 10 colors, and features the signature glabella-framing metal and interchangeable lenses.
Watch them in action

Who wore them: Tom Selleck as Thomas Magnum in Magnum P.I.
What you need to know: Is this a movie? No. Would a sunglasses roundup be incomplete without these? Obviously. As Vuarnet has seen a resurgence in recent years, they’ve been re-releasing iconic shades from their catalog, and this is a particularly anachronistic favorite. French-made sunnies in Oahu, Hawaii? Sign us up. And yes, these include a detachable, wrap-around cord.
Watch them in action

Who wore them: George Clooney as Danny Ocean in Ocean’s 11 and Ocean’s 13
What you need to know: The Ocean’s trilogy has more stellar shades than Terry Benedict’s casino vault has bills. Problem is, most people don’t have the swagger to pull of a Reuben and many styles, including Rusty’s classics, have been discontinued; after all, Ocean’s 11 is pushing 20 years now, and these films haven’t been similarly accepted into the sunglasses pantheon like others on this list. But the Persol 2420s Clooney wore in the first film and the 2157s he wore in the third are both available on eBay. If you don’t want to buy used, the new 2454s have the same squared lenses, top bar and curved bridge.
Watch them in action

Who wore them: James Dean as Jim Stark in Rebel Without a Cause, Tom Cruise as Joel in Risky Business, Leonardo DiCaprio as Jordan Belfort in The Wolf of Wall Street, John Belushi and Dan Aykroyd as Jake and Elwood in The Blues Brothers. In other words, just about everyone.
What you need to know: We are compelled to include the Wayfarer even though you’re well aware of their existence. Since the style debuted in 1952, they’ve weathered the storm of ‘60s mod, ‘70s coloration, ‘80s Aviators, ‘90s Oakleys, etc. Every gent should have a pair, if just as a backup. They’re like the white tee and jeans of your face — it looks good on anyone. You could buy them in various shades of tortoise, but why on earth would you do that?
Watch them in action