This week, Delmonico’s — a New York steakhouse that bills itself as America’s first restaurant — celebrates its 180th anniversary. We recently paid them a visit to figure out how the putative “first restaurant in America” remains intact to this day.

So much has been written about Delmonico’s that it’s difficult to know where to start.

By then, Delmonico’s had been in business for six decades, transforming the very nature of dining in America during its run. But the onset of Prohibition, years of financial mismanagement, and the fact it was no longer the enterprising gourmand’s only option for haute cuisine had devastated the restaurant. Funds were so meager on closing night that they served the last meal with mineral water — a sobering scene if there ever was one.

Writer Robert Shaplen described the last supper in the November 10, 1956 issue of The New Yorker: a small party of invitation-only diners were seated in a deserted grand ballroom, where “a string orchestra played ‘Auld Lang Syne,’ following it with other sentimental and nostalgic tunes until 11 o’clock, when the gathering quietly dispersed.”

And just like that, after 86 years in business, America’s first restaurant closed.


As historian Paul Freedman suggests in his book Ten Restaurants That Changed America, which has a whole chapter devoted to Delmonico’s, the restaurant “set a pattern for what fine dining meant for the nineteenth century … [and] unequivocally established an American standard for elegance and refinement and inspired many imitators.”

Which is to say, the name Delmonico had become a symbol of public social life. A venue for pageantry, the elegant dining room invited groups to sit down and order from a wide-ranging menu. It routinely hosted garish dinner parties for New York’s growing aristocracy. And it introduced American palates to elaborate, exotic French dishes the likes of which they’d never tasted.

Essentially, it built the template for fine dining in America.

As it turned out, though, Delmonico’s wasn’t finished.

From the 1930s to present day, the restaurant has seen revivals under different names and new ownership — including the reopening of its principal location on William and Beaver Street in 1999, where it still stands today.

Does it matter that the restaurant hasn’t actually been open for 180 consecutive years? Hardly. What difference does that make now? To call it inauthentic would undermine the staying power of its very name, not to mention to ignore that the original Delmonico’s catered exclusively to the upper — and exclusively white — crust of New York society. These days, it’s a far more democratic place that welcomes all comers.

Like any institution, it’s had to evolve to survive.

When it opened in 1827, it was actually a confectionary shop. The full-fledged William street location didn’t come until 1837. In those years, the New York restaurant scene, save for a few roadhouses and street stalls, was nonexistent. So, in a way, Delmonico’s and New York City grew up together: as the city expanded to become the center of everything, so did Delmonico’s.

And their intertwining histories have given birth to more than a few bold claims, some more mysterious than others.

Take the classic Wedge Salad, which first appeared on the menu under owner Oscar Tucci’s stewardship (1929-1977). How quartered iceberg lettuce on a plate became a steakhouse staple, no one really knows. There are conflicting reports on the dish’s true origins, but Delmonico’s lays claim to at least one of them.

And who’s to question them?

This is, after all, the first place that used tablecloths. The first with a dedicated wine list. The first to admit female diners without a male companion. The place where the phrase “86’d” — and other bits of kitchen patois — was born. Also the place that gave us flashy creations like lobster Newburg, eggs Benedict and the restaurant’s namesake ribeye steak.

Beyond the food, there is something more we can learn from Delmonico’s, in that it provided generations of diners with a blueprint for eating as a communal endeavor. An excuse to dine for dining’s sake. Because when we talk about dining with good company — and all the social norms and guidelines for being a good dining companion — what we’re talking about is dining at Delmonico’s.

And that’s true now as it ever was. Walk into the restaurant today, with its opulent rooms and tables dressed in white linen, as waiters in jackets glide beneath enormous chandeliers, and you can’t help but put on your best face.

Does Delmonico’s serve New York’s best steak? Its most decadent sides? Not by a long shot.

But if that’s the criteria you choose to judge it by, you’re missing the point. Delmonico’s is a restaurant to be appreciated not for the actual bread, but for the proverbial breaking of it.

Because no man ever ate the best meal of his life in isolation. 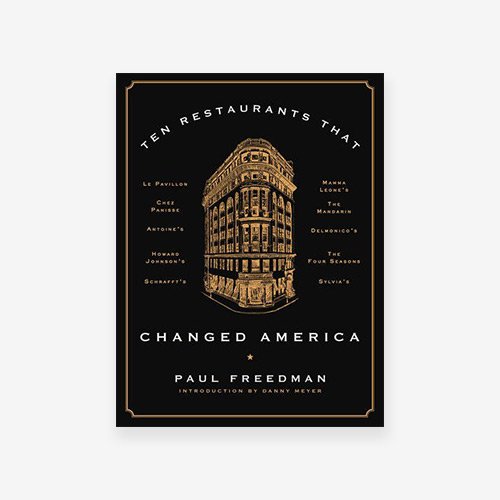 From Delmonico’s to Sylvia’s to Chez Panisse, a daring and original history of dining out in America as told through ten legendary restaurants.