Forget the Super Bowl. This NFL Season Is All About the Tua Bowl. 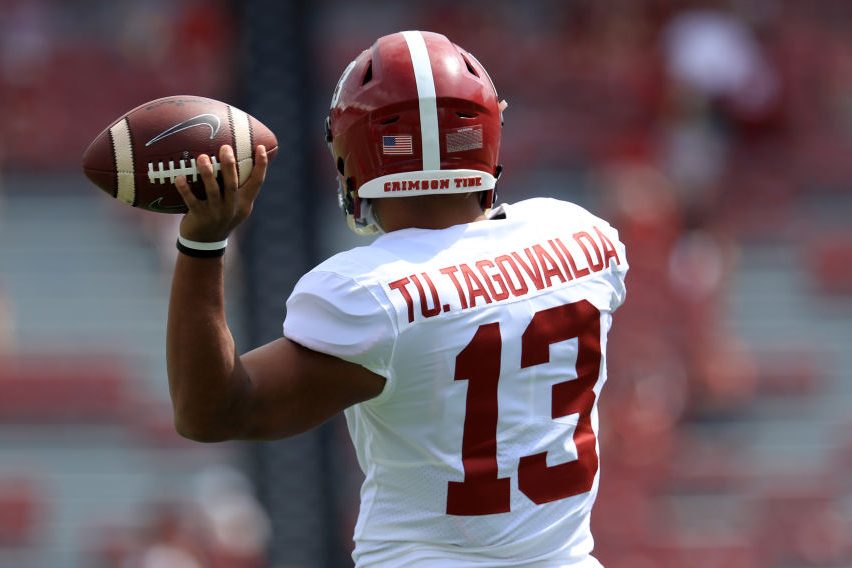 Tua Tagovailoa of the Alabama Crimson Tide warms up before a game. (Streeter Lecka/Getty)
Getty Images
By Evan Bleier / October 4, 2019 6:00 am

Following his team’s Week 4 loss to the previously winless Pittsburgh Steelers on Monday Night Football, Cincinnati Bengals head coach Zac Taylor, talked about what it was like getting blown out 27-3 on national TV.

Unfortunately for the NFL and its fans, Taylor and the Bengals are not alone in their failure to get in the win column.

With a quarter of the NFL season in the books, there are still six teams (Dolphins, Redskins, Jets, Broncos, Cardinals and Bengals) that have yet to collect a win on the season and another two (Falcons and Steelers) that only have a single victory this year.

The situation is particularly dire in the AFC as there are more teams with zero wins (four) than there are with three or more (three). Most teams in the American Football Conference are stuck in the middle (2-2).

While that’s obviously not ideal for those eight teams or their respective fan bases, it’s also a negative thing for casual fans.

Sure, it’s great for New England and Philly fans that when the Patriots play the Redskins and the Jets take on the Eagles this weekend it’s a virtual lock that the Pats and Birds will win, but it doesn’t mean the games are going to be enjoyable or even remotely interesting to watch for neutral fans.

Fantasy players who own members of the Jets or Redskins don’t really have a reason to watch those games either as, outside of New York running back Le’Veon Bell, there probably isn’t a single player on either Gang Green or the ‘Skins that’s startable against the Pats or Eagles.

Going forward, the only reason for hometown fans of the Redskins, Jets, Bengals or Dolphins to watch their team’s games is to root for them to lose in the hope of securing the No. 1 pick and the right to select quarterback Tua Tagovailoa out of Alabama or QB Jalen Hurts from Oklahoma.

As to which of those teams may actually go winless and secure the Golden Sombrero like the 0-16 Cleveland Browns did in 2017 and the 0-16 2008 Detroit Lions did before them, it’s tough to tell because they all have a shot since they play one another. (The Cardinals are technically out of the running since they tied their first game and therefore can only finish as bad as 0-15-1.)

Depending on how you look at it, the Broncos are either in or out of luck as they don’t have any games on their schedule against the Dolphins, Redskins, Jets, Cardinals or Bengals which means Denver will theoretically have a tougher time winning a game but will also have an easier shot at going 0-16 to luck up the No. 1 pick.

What that also means is there’s a chance the NFL could actually have two 0-16 teams for the first time in history as the Broncos could lose out and another one of the winless teams, say the Dolphins, could lose all of their games too and thereby give the Jets, Bengals and Redskins the win they need to avoid the Golden Sombrero.

Will that happen? Probably not. This is the NFL and even the worst team is capable of beating the best team if things bounce their way and they get lucky. For proof, look no further than the Dolphins knocking off the eventual Super Bowl champs during the “Miracle in Miami.”

What’s more likely to happen is that we’ll have a series of Tua Bowls with the losing team actually being the winner due to being one loss closer to drafting Alabama’s stud quarterback in April.

It’ll be worth it for the team that ends up with Tagovailoa — or trades his rights for a treasure trove of draft picks and veterans — but it won’t be worth watching for anyone who enjoys quality NFL football.

For a league that prides itself on parity and competitiveness, that’s a bad thing.