Welcome to the Era of the Customizable Fountain Pen

Montegrappa has been making pens in Italy for over a hundred years.
By Nathaniel Adams

My first fountain pen was given to me by William Walden, a 90-something former New Yorker copy editor to whom I read poetry every Wednesday afternoon after his eyesight had failed. William was full of stories about people like E.B. White, Wolcott Gibbs and James Thurber, who would swipe William’s pipe tobacco when he wasn’t looking. William was also an avid pen collector, and he gave me a wide-nibbed beautiful green celluloid number with black swirls in the material that brought to mind Malachite.

Since then, I’ve started my own modest fountain pen collection: my father gave me his old solid silver Parker and a red-barreled Montblanc with a nib so thin it clogs too much to use; a buffalo horn and 14K gold limited edition pen made for Brioni gifted to me by my friend Kamau; an inexpensive red Aurora Ipsilon for everyday use, and so on. But one of my favorite pens is my Montegrappa Fortuna Skull pen. I first saw this pen in the hand (the one which wasn’t holding a cigar) of Katsuhiko Shimaji, former editor of Japanese Playboy magazine, as he was mixing us highballs in his private whisky bar hidden away on the men’s floor of Tokyo’s Isetan department store.

The Fortuna is a sleek pen of good weight, but what made this one in particular stand out was the grinning skull embossed into the pen’s cap, complete with a single black Swarovski crystal tooth glinting in its maw. It was weird. It was flamboyant. It was thematic. It was the perfect Memento Mori for diary-keeping or eulogy-writing. It was quintessentially Montegrappa; and this is when I first became aware of the Montegrappisti, the devoted fanatics who will write with nothing else. I kept my eye out, and as soon as I came across a Fortuna Skull at a price I could afford, I bought one for myself.

Montegrappa has been making pens in Italy for over a hundred years and their brand has come to be associated not only with quality and heritage — as many other excellent pen brands are — but with their taste for wit, whimsy, experimentation and occasional flamboyance. Terry Wiederlight, owner of New York’s 70-year-old Fountain Pen Hospital shop, says that Montegrappa pens are their second best-sellers after the iconic Montblanc, a success which he attributes to the company’s unique design visions: pens inspired by the Apollo 11 rocket; “The Revolver,” a wild-west themed pen with a mock rotating bullet chamber and the Samurai, which graces the cover of the current issue of the Fountain Pen Hospital’s catalogue.

So quelle surprise (or whatever they say in Italy) when I discovered front and center on the Montegrappa website a digital platform for custom-designing that most analog of beauties, the fountain pen. I wrote to Giuseppe Aquila, CEO of Montegrappa to find out why a 100-year-old company so famous for its bold and innovative designs has suddenly decided to hand the design reigns over to its customers. And thus I learned to love “The Configurator.”

After sending me a press release with disconcerting Silicon Valley-like buzz phrases  about “disrupting” the pen industry, and talk of a marketing campaign involving international social media influencers, Aquila allayed my curmudgeonly apprehensions a bit, explaining that The Configurator is a simple-to-use customization platform developed in conjunction with the Italian University of Udine. It was launched in November and so far only allowed the user to customize the Montegrappa “Extra” pen silhouette, choosing a fountain or rollerball and a large selection of colors, materials, and engraving options for the various parts of the pen. It is the first online pen customization platform of its kind and Montegrappa will continue to improve the system, making it faster and adding several other silhouettes.

Of course, bespoke one-off pens for high-paying Montegrappisti have always been part of the brand’s work, as they are for most respectable writing instrument makers, but the Configurator is more like made-to-measure. You can customize lots of details (three billion possible combinations, according to Aquila,) but you are still ultimately getting some version of the classic Montegrappa “Extra” pen. I then lost myself in the website for several hours designing my own pens, trying to find the cheapest pen I could make (around 850 Euros) and then slapping wooly mammoth ivory and engraved 14K solid gold all over it to see how high the price can go (about 20,000 Euros).

So how has the Configurator been received?

“With pens you have the real collectors, the purists,” explains Aquila. “For them the act of writing is a ritual, all about the experience — the type of nib, flex, color of ink. What we see is that the people interested in the configurator are more fashionistas: they want their pen to be matching their watch or their car or their suit. I think it’s more in that direction rather than the pen aficionado. From the experience we’ve had so far, I’d say the vast majority of the people are more interested in the look rather than in the functionality.”

So then: a new audience, a direction for the business to grow. But also an opportunity to sell directly to consumers and gather data and feedback about what they want rather than relying on the dealer as a middleman. Is this another body blow to retail? Will people give up the pleasure of working with a knowledgeable pen salesperson, scratching their names out onto empty pads in vibrant inks? Will robots be selling us our pens? Do we need to alert Andrew Yang to this latest threat?

Wiederlight of the Fountain Pen Hospital says that of course his business — like all brick-and-mortar retail businesses but particularly because writing instruments are so specialized and old fashioned — is nervous about online retail.

“We have a lot of people come in, take up a lot of my salesman’s time, they’ll try out the pens, then they’ll walk out and you know what they’re doing: they’re looking for a better price online. There’s not too many stores left — there were fourteen stores in New York who carry high-end writing instruments and we’re basically the only one left.”

Wiederlight, however, does not blame this on things like the Configurator, in fact, he welcomes Montegrappa’s plans to expand the customization program into more real-world boutiques, and can easily see one of his veteran salespeople brandishing a touchscreen tablet in their Montegrappa shop-in-shop and walking a customer through the process.

I have yet to purchase my own pen through the Configurator, although I’ve designed several contenders I’d love to see made real, love to hold in my own hand, love to write masterpieces with. I like the idea that if I ever do purchase a pen through the platform I know the packaging will be exquisite, with my name engraved on the box and my initials on the lid of the ink bottle. There will be a personal letter from Aquila and a Polaroid photograph of the pen in the hands of the craftsman who made it. And maybe someday I can pass on to somebody as a gift worth cherishing — one that I had a hand in designing. 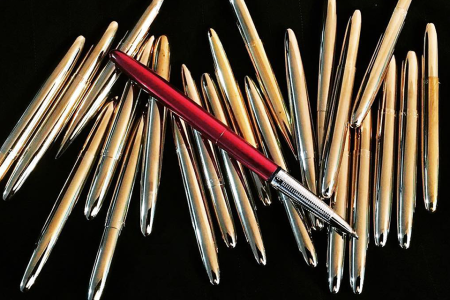 The Magical Space Pens That NASA Uses? You Can Own One.