If Someone On Your Flight Smells, Here’s What to Do

A few weeks back American Airlines removed a family from a flight for body odor.

Without getting into the details or picking sides — Was it discriminatory? Which member smelled? Who complained? — we thought we could make something useful of this.

So we asked some travel, health and legal experts about dealing with the secret worst part of your flying experience: odors.

What are your rights if you’re near a smelly passenger? Can you move seats? And why do people think it’s OK to take off their shoes?

And, finally, how can you make sure you’re not the passenger everyone is complaining about?

“It’s an uncomfortable topic to address,” admits Lisa Grotts, author of A Traveler’s Passport to Etiquette. “It’s a bit like mental health: No one wants to talk about or admit that it’s a problem, but it is on many, many flights. Some people are blind to their own smells.”

A few odorous questions and answers, below.

Can airlines kick someone off for body odor?
Actually, yes. “Most airlines have rules in their ‘contracts of carriage’ that allow an airline to remove a passenger if the stench is so bad that other travelers could potentially become sickened by the odor,” says David Reischer, attorney and CEO for LegalAdvice.com. “Additionally, the FAA has operating procedures that allow for passenger removal if the safety and health of other travelers are affected by the bad odor from a passenger.”

As well, as private companies (at least in the U.S.), airlines generally “do not have an absolute duty to transport you under any circumstances, even if you have a ticket,” explains Miguel A. Suro, a Miami-based attorney. “Indeed, there will be a contract of carriage between you and the airline, and it will probably contain broad language to the effect that the airline can eject you from the flight if you present any kind of problem.” Suro points to the current American Airlines Conditions of Carriage, which specifies that a passenger must “be respectful that your odor isn’t offensive (unless it’s caused by a disability or illness).”

What if the odor isn’t this person’s fault?
That brings us to the disability and illness part. If the person has a bad odor as a consequence of an actual physical ailment or condition, then the provisions within the Americans with Disabilities Act may protect a passenger from being removed. “It’s important for the flight crew to discern the source of the foul odor and then make a judgment call on the consequences of removing the passenger,” says Reischer.

What does the crew do when faced with odor complaints?
“Offensive T-shirt images and bad smells are just some of the things that can be deemed inappropriate or offensive,” says Brett Manders, an airline pilot and author of Behind the Flight Deck Door – Insider Knowledge About Everything You’ve Ever Wanted to Ask a Pilot. “A rough rule of thumb cabin crew will use is, ‘Will this [issue] present more of an issue once we’re in flight?’ The cabin crew don’t want to deal with things en-route, and will seek the Captain’s permission to offload the offending person.”

If you’re near the odor, how can you ask for help?
Don’t directly confront anyone. Be surreptitious when you ask for help from the flight crew … who may have an easy solution. Turns out ground coffee is an awesome odor eater, says Manders. “Say a person removes their shoes and the smell permeates the cabin, the cabin crew will often hide some raw coffee grounds near the stink-bomb shoes,” he says.

Otherwise, you can quietly ask the cabin crew to move your seat and explain why. If it’s a full flight, ask if they have any deodorizer (often the bathroom does).

I’m worried I might be an offending source. What do I do?
You could start by not taking off your shoes. If your shoes always stink, slide into some fresh slippers or slip-ons, and “try placing used green-tea bags, fabric softener, lemon peels, baking soda or even water essential oils in your shoes overnight before the flight,” says Aparna Pathak, from the travel app GLYD.

Some other common-sense suggestions from Pathak include not carrying stinky food on a flight, not using the tray table for changing a baby’s diaper, and, if possible, changing into fresh clothes an hour before your flight (including your underwear).

Oh, and don’t eat beans. “Your body actually becomes gassier in an airplane due to the increased cabin pressure,” says Samantha Morrison, a health expert for Glacier Wellness. “This effectively causes gas in your intestinal tract to expand and cause uncomfortable bloating and flatulence. While there’s no perfect solution, your best bet is to stay hydrated and avoid foods which can cause gas, such as beans and vegetables.”

What clothing should I wear?
Anything made from merino wool. “That surface has a natural waxy coating called lanolin that resists water,” explains Ernest Shahbazian, founder and owner of the travel site Trip Astute. “Think of it as a natural sports fabric that can keep you dry. The waxy coating is also naturally antibacterial, which helps with reducing the odor in the fabric. Also, I’ve found that wearing wool allows you to pack lighter, be less wrinkly and potentially get more wears between washings.”

Layering can also help.“Wear tank top or a T-shirt, then a long sleeve and a sweater,” says Valerie Joy Wilson of Trusted Travel Girl. “This way you can always adjust what you’re wearing according to your body temperature and you won’t get too hot or sweat profusely.”

If you’re going to be on several flights and/or need to pack light, Ably makes a lot of comfy, all-natural, stain- and smell-proof clothes that are perfect for travel.

And finally, any products I should bring on board to help? 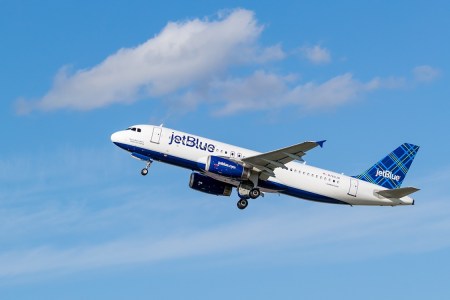 Will Americans Actually Join the Flight Shame Movement This Year? 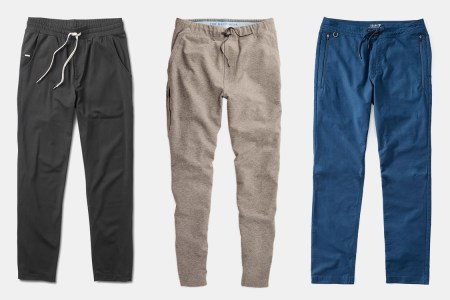 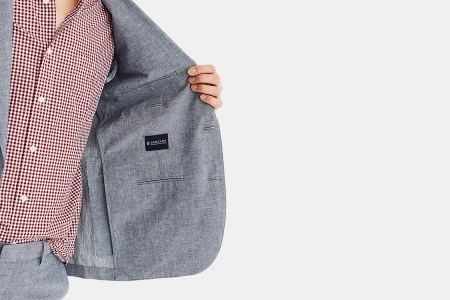 These 7 Lightweight, Wrinkle-Resistant Blazers Are Perfect for Travel