There’s a perfectly understandable tendency over warm holiday weekends to toss dietary discipline to the wayside. You’re assembling — at a safe social distance with a relatively small group of friends and family in accordance with local mandates, of course — in a backyard with sizzling meats and chilly beers; everyone’s BMI can take a backseat for the day. The last time I was at a family event, I consumed a plate of buffalo-chicken mac and cheese, four Coronas and a corner slice of ice-cream cake in a two-hour window. I paid for it later, but at the time it felt like the right thing to do.

That said, with Memorial Day afoot and plenty more BBQs awaiting you in the months ahead, now is the time to at least consider some methods that should help you have a healthier 72 hours and not end up with your stomach feeling like a washing machine. I’m not here to argue against a weekend of shameless consumption. But if you can exercise a little self-control over holidays (while wielding some newfound creativity), it’ll be easier than ever to implement such tricks into the many non-holiday weekends going forward.

And since we’re talking about the backyard, this all starts with the grill. Standard grilling practices around this time of year — throw 25 Oscar Meyer wieners on the grill, try to keep everyone happy — could use a little retooling. Below, we detail five tips for healthier, more thoughtful grilling, from the importance of marinades to the magic of skewers.

The meat on the menu at most cookouts boils down to hot dogs and burgers. From a health perspective, that’s lose-lose. Hot dogs — which Americans eat 7 billion of each summer (seriously) — are made with the leftover bits of animals often raised in cruel factories, then juiced up with corn syrup and four different types of sodium to stay “fresh.” A single hot dog contains 25% of your day’s sodium allowance and over 14 grams of fat. Meanwhile, most burgers come with a series of additives and high fat content, while the “sugarization” of hamburger buns isn’t doing any favors, either. The solution here is to grill lean, low-fat meats like skinless chicken breast, turkey burgers, flank steak, bison burgers, lamb, pork chops, salmon or mahi-mahi. These foods will probably be a little harder to find, cost more and require extra research on proper preparation, but they also don’t come with outsized helpings of saturated fat. If you’re the brains behind your BBQ, you don’t have to sacrifice hot dogs and burgers completely. But consider adding one or two additional meats, to give your guests (and yourself) a healthy choice should they so desire it.

The most common concern about shifting from the tried and true? The other stuff doesn’t taste as good. Which is a fair point … if you’re not willing to put in the work. Preparing lean meats like chicken breast or salmon with a marinade ahead of time will drastically improve their taste. Marinating allows you to maximize flavor while using less salt; you just need a half cup of marinade for each pound of food you’re cooking. There are a billion marinade recipes on the internet, and we’ll let you explore them yourself, but just remember a few basic rules: A) choose recipes/bottles that use olive or canola oil; B) marinate meats and chicken for up to two hours, fish for an hour (and put both in the fridge as you do); and C) set aside marinade at the beginning for basting on the grill later — you don’t want to baste with the marinade that mixed with raw meat.

Grilling smaller portions is generally efficient; that’s less time on the grill per piece of meat, and will keep your line moving. But it’s also a direct benefit for everyone eating. The USDA recommends 5.5 ounces of lean meat a day, and only 3 ounces at a time. If you can keep the meat servings on the more reasonable side, people will have more room for sides.

Speaking of, you can absolutely throw all sorts of fruits and veggies on those piping-hot slats. The best burger I had last year was in Austin, and featured a grilled pineapple. Look for ways to bring color to your BBQ, and consider grilling veggies like asparagus, bell peppers, eggplant, mushrooms and zucchini, or fruits like watermelon, peaches, mangoes and pineapples. The key for vegetables is a bit of oil, cutting them into smaller pieces, and monitoring their progress carefully. (They don’t take too much time, so cook them over high heat, then let them finish off to the side.) For fruits, meanwhile, you’re going to want to cook them on the top rack, in a still-hot grill, after the mains and vegetables have been served. This will work well with timing anyway; the caramelization of the sugars will make them a nice dessert.

Skewers are a sacred tool for the healthy griller. Guests go crazy for them (holy portability!) and they allow you to apply literally every single suggestion listed above. Consider a marinated chicken kebab skewer with red onions, yellow bell peppers and zucchini. The portion inherently makes sense, it’s colorful, and it’s going to taste better than a hunk of chicken breast on a paper plate. To that end, when preparing a meal with skewers, remember to soak each skewer in cold water for 20 minutes before getting them on the grill. This makes sure they won’t disintegrate in fiery disappointment. 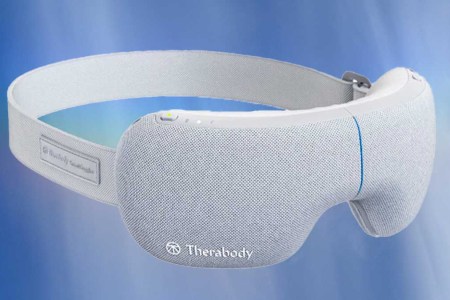