How I Beat Gordon Ramsay on His Own Show

The executive chef and owner of The Market Place restaurant in Asheville and Billy D’s Fried Chicken in Asheboro, North Carolina-based chef William Dissen welcomed Gordon Ramsay to the Smoky Mountains for a cooking contest on a July episode of National Geographic’s Gordon Ramsay: Uncharted. And unlike every other contestant to take on the multiple-Michelin-starred chef thus far, Dissen won.

Known for his commitment to sustainability and utilizing local ingredients, Dissen was initially contacted about appearing on the show last spring when the country was in lockdown. At first, he thought the emails he was receiving were spam. Finally, one of the show’s producers was able to get him on the phone and relay that the offer to have a Carolina cookoff with Ramsay was indeed a valid one. Dissen accepted the challenge and began educating the showrunners about the local heritage and heirloom ingredients before the show taped in early October.

Having never met Ramsay before, Dissen didn’t really know what to expect. And he won anyway. Here’s how.

I met him for about two minutes before the show. He rolled in with his entourage and I saw him, but then he was gone hiking up in the woods. The next thing I know, he’s rappelling down this 100-foot waterfall and I’m there fly fishing. It was crazy. The guy is in really great physical condition. But that’s Gordon Ramsay. I wouldn’t expect anything else. After we met, I talked to him about the Smokies in western North Carolina and the distinct culture in the region. Then I sent him off on some adventures to go learn about it. He went to make moonshine. He went foraging for wild mushrooms. He went kayaking with a local guide to find wild crayfish. And then he went to a Cherokee reservation to learn how to make hominy. At the end of the show, we met again for the cookoff.

At the beginning of the show while I was telling him about the culture, I told Gordon he was in the really rugged mountains and was going to need a four-wheel-drive vehicle to get around. I told him I had a rednecked-out Toyota Tacoma with a lift kit and mud tires and a big winch bumper. He said, “Oh, that’d be great. I’d love to use it.” And I said, “I want to create a little wager with you: If you win the cook-off, you get to keep my truck. But if I win the cook-off, you fly my family and I to London and treat us to dinner at your Michelin three-star namesake restaurant.” He had no idea about any of it and I think it threw him for a loop, but he said, “Alright, let’s do it.” This was in the middle of the pandemic. What did I have to lose? That was probably one of the bigger wagers on the show.

I really just wanted to showcase the best of the region and cook the way we cook every day in the restaurant. Trying to do something new in a cooking competition can be kind of a fatal flaw. So I ended up cooking pan-roasted sunburst mountain trout, which is a local rainbow trout, and stuffed that with thyme and lemon. I served that over a candy-roasted squash puree and made a little fresh salsa verde. I took the roe from the trout and garnished it like caviar on top. I took foraged hen-of-the-wood mushroom and cooked them down with shallots, garlic and bourbon and finished it with truffles and cream to make kind of a cheese-and-breadcrumb topping. I serve it with grilled bread we make at one of my restaurants. I made a traditional dish called leather britches that a lot of Appalachians make out of an heirloom variety of string beans. Then I made a sour corn and crawfish relish and served that over griddle cakes. It’s a traditional cake made from leftover rice and cornmeal mixed with buttermilk and salt. We were cooking about 6,000 feet up over an open fire. We have a wood-fired grill at one of my restaurants and I also do a number of cooking demonstrations that require outside open-fire cooking. I felt very comfortable cooking straight over the fire and with cast iron and being outside in the elements. That was definitely a leg up for sure.

My friend Allan Benton is the renowned producer of Benton’s Bacon and Benton’s Country Ham in the Smoky Mountains of Tennessee. He’ll age some of them longer than you would even prosciutto, and I had a 25-month aged country ham. I put it on a Spanish-style ham stand. I said, “Remember going to parties and drinking vodka out of an ice luge in college? Well, today I’ve made a bourbon-and-ham luge.” I took a 14-year-old single-barrel bourbon from my friends in West Virginia and Smooth Ambler Distillery and luged the bourbon down the country ham after we’d cut a V channel into it. It’s a good parlor trick. We took shots off of it and chased them with the ham.

We were kind of busting each other’s chops the whole time, but it was actually a really fun cookoff. He didn’t know what he was going to cook and had no idea what I was going to cook either. Nothing was scripted. It was definitely very head-to-head. It was fun cooking against him but also fun watching him cook. Gordon Ramsay is deemed probably the most successful chef on the planet and has I don’t even know how many Michelin stars. To be able to cook against him was amazing. And obviously bringing home the win is an even more amazing accomplishment. Talking to Gordon afterward, he said, “No one has beaten me yet. So nice job.” I was having a good time that day. Maybe it was the bourbon luge. I asked him, “What kind of champagne do they serve in first class on British Airways?” I’m still waiting for my tickets and invitation. It’s still a little crazy, but hopefully one of these days. 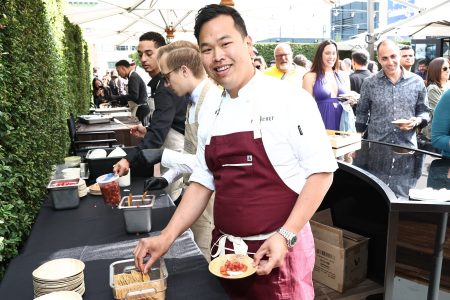 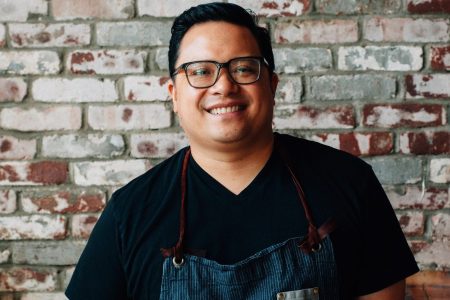 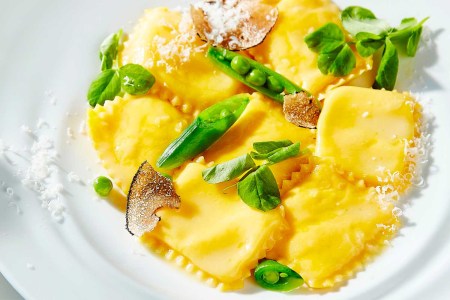