A Return to Scary Normalcy: Krampusnacht Is Back

Christmas started as a pagan holiday — kind of. Some traditions of the solstice-adjacent Roman festival of Saturnalia carried over into Christmas. The solstice may not be well-represented on the Hallmark Channel or on Starbucks cups, but one of its key figures — the mythical horned character of Krampus, a sort of anti-Santa who punished naughty children during Advent — is alive and bigger than ever, at least in the U.S. (Maybe you’ve seen Krampus, starring Adam Scott.)

In DC, he’s the focus of one of the season’s true highlights: the Krampusnacht DC festivities, which take place tomorrow. “Krampus is sort of a holdover from more pagan celebrations,” says Lyndsay Webb, one of the event’s organizers. “With the solstice being the darkest night of the year, it was actually sort of scary. Krampusnacht DC has sort of taken that [story] — based largely on where the idea of Krampus originates from, which is the Bavarian region of Germany, Austria, northern Italy — and we’ve spun it into a non-traditional alternative celebration for people who don’t really celebrate the Judeo-Christian Christmas. We celebrate that in a lighthearted way, and make it a fundraiser.”

The 2022 version will look and feel a bit different from its pre-pandemic version, which made its home on H Street. This year’s edition is a two-part celebration, inside and outside, fun for the family in the afternoon and adults only once it’s dark. The biggest difference is the location(s). 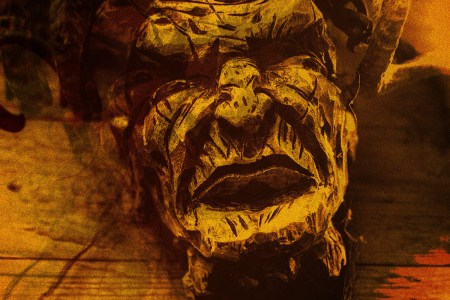 How Krampus, the German Christmas Demon, Took Over America

He whips naughty children with branches and eats them, and he's winning our hearts

No longer on H Street, the 9th annual Krampusnacht DC begins at every family’s favorite afternoon destination: a brewery. Kids and adults are welcome at DC Brau from noon to 4 p.m. for a “Krampustag” party. Some staples from the first eight editions will be present, like drum troupes, jugglers, costume contests and appearances from both Santa and Krampus.

What’s new is the logistics. The first part is explicitly family-friendly and indoors. The evening component at Wundergarten is an adults-only affair and will most likely fill the Krampuschnacht hole in your potentially evil heart, featuring the same type of performances from the first eight editions. Both events stress inclusivity and will raise funds for the Wanda Alston Foundation, the only housing program in Washington, D.C. solely dedicated to offering pre-independent transitional living and support services to homeless or at-risk LGBTQ youth.

“The primary difference is we are moving off of H Street,” says Webb. “We don’t intend that to be a permanent change. But it is a change for this year, just because the primary venues and businesses that we worked with on H Street have either changed ownership and have sort of redesigned the business and can’t really accommodate us or have gone out of business. And so many restaurants on H Street have expanded their outdoor seating. Our regular ‘parade route’ is kind of not viable this year.”

According to Webb, “even though the format has changed, it is going to definitely have the same heart and spirit of all of the previous years.”

Krampusnacht DC is Saturday, December 10 at DC Brau and Wundergarten. Festivities at DC Brau begin at noon, while the adults-only party ast Wundergarten kick off at 7 p.m. Visit krampusnachtdc.com for more information.