American whiskey distillers are embracing their Irish cousins — here's why 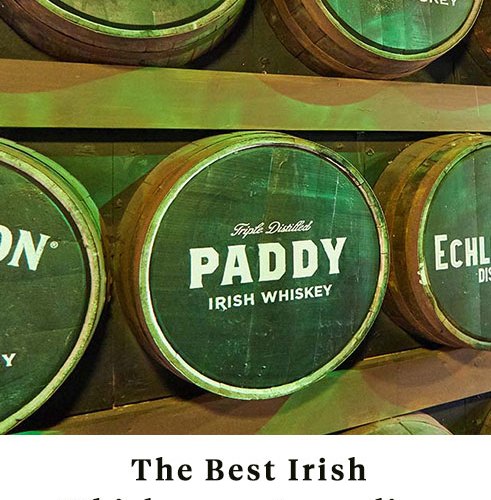 If you’re an American who only finds themselves drinking Irish whiskey on March 17th, you’re missing out. Don’t take our word for it — take the word of America’s whiskey and bourbon producers.

“It was actually Irish whiskey that got my dad and I into thinking that we could get into the bourbon business,” remembers Trey Zoeller, the founder and chief strategist of Jefferson’s, who credits the Bushmills single barrel program as a particular inspiration for buying up different bourbon barrels and getting into the whiskey business at a time when nobody was buying brown spirits stateside.

With that in mind, we asked some of our favorite bourbon and American whiskey founders and distillers about their love of Irish hooch. Below, some words from Zoeller, along with Denny Potter (Master Distiller at Maker’s Mark) and Lisa Wicker (President/Master Distiller of Widow Jane Distillery and Sr. Consulting Distiller at George Washington’s Distillery).

Sláinte, as the Irish drinkers say (along with any Americans who love their Irish spirits).

What do you appreciate about Irish whiskey?

Denny Potter: My family traces the bulk of its roots back to Ireland, so there’s a personal appreciation to the heritage and legacy of Irish distilling. And I appreciate the softer flavor profiles of Irish whiskies. Most Irish distillers achieve that through a triple distillation process in pot stills. By comparison, most of us bourbon distillers undergo a double distillation, first through our column still and then a pot still. At Maker’s Mark, we also strive for that softer flavor profile, but we do it by using our own soft red winter wheat instead of the spicier rye commonly found in a bourbon mash. It’s a great example of the industry’s ability to leverage multiple avenues during production to arrive at a similar, and equally delicious, end result.

Lisa Wicker: Irish whiskey always tastes and feels familiar to me — my first distillations were on a 150-gallon Spanish Hoga Pot still and the distillations I oversee at Mount Vernon are pot distilled.

Trey Zoeller: Irish whiskey is actually more similar to bourbon than it is to their Scottish neighbor’s whisky. The grains are similar as well as the aging technique, other than the fact that we use new barrels — therefore, Irish whiskey is impacted less by the wood. This along with the less humid and volatile climate gives Irish whiskey the ability to age longer and pick up more subtle notes. Bourbon aged for that long tends to get over-oaked.

Related: Why Irish Whiskey Is Booming Once More

What’s something American whiskey/bourbon producers could learn from their Irish cousins?

Denny Potter: Their ability to innovate while maintaining a willingness to embrace tradition. Innovation is great for whisky, but I believe distillers have a responsibility to do so purposefully, rather than running from our roots to churn something out that meets a fleeting demand. At Maker’s Mark, that means experimenting with new wood finishes; for other American producers, it may be looking at the possibilities of heirloom grains. Irish producers have done an excellent job of exploring new cask finishes and innovating with new mashbills; they’re embracing their pot-still traditions and native ingredients such as barley and corn, but shaking things up by playing with the mashbills or aging in oak types previously thought to be unconventional. They’re taking a very smart approach by using traditional ingredients to arrive at new flavors.

Trey Zoeller: At Jefferson’s, we certainly learned about single barrels and finishing from our Irish cousins. Irish whiskies like Redbreast and Green/Red/Blue Spot all have great finishing barrels.

What’s your favorite or go-to Irish whiskey, and why?

Lisa Wicker: Redbreast and Writers’ Tears have been long-time go-to bottles for me. My latest obsession, though, is Green Spot. It’s delicious and it reminds me of the very best work days. Barley on the nose, palate and finish, mixed with a little iodine and bourbon-soaked fruitcake.

Trey Zoeller: Redbreast 12 Year, matured in a combination of ex-bourbon barrels and sherry casks, which gives it a great combination of spicy and creamy notes. I also love the Spots. Red and Green are my favorite with their combination of barrel types.

Denny Potter: I don’t know if I have a go-to just yet, but I am traveling to Ireland in June with my family and I intend to research this very subject. It’s my parents 50th anniversary and all 15 members of my immediate family will be there, so I’m sure we’ll have more than a couple opinions.

It Took a Minute, But People Are Realizing That Beyond Meat Burgers Aren't Healthy
We Went to the Opening Night Party for Woody Harrelson’s New Dispensary
Andy Summers and Stewart Copeland Recall The Police’s Pre-Fame Days
I Have Some Questions About Megan Fox's Jumpsuit Crotch Hole
Harry Benson Reflects on His Decades of Photographing Paul McCartney