The Story Behind Barrell, The Year's Best, Most Untraditional Bourbon 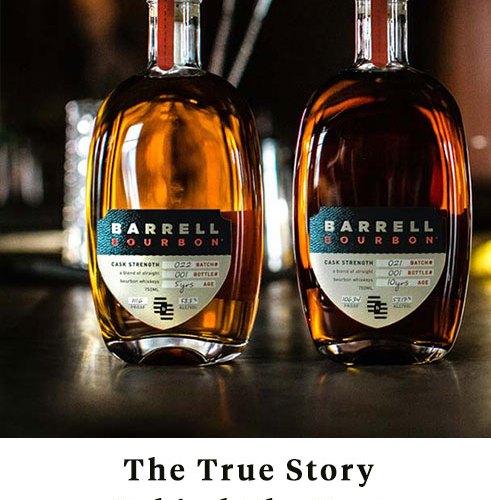 On the surface, the story of this year’s best bourbon is that there is no story. Barrell Craft Spirits started in 2012, and the company admittedly — and in a very transparent manner — sources and blends all their whiskey, rye and rum in lieu of distilling their own juice. There’s no grandpappy with a secret recipe or illegal moonshine operation in the company’s (short) past. And while he’s a veteran whiskey enthusiast with a fine palate, founder Joe Beatrice had no official brown spirits experience when he launched.

So who are these guys? And how, in less than a decade, did they go from distribution in two states to availability in 46, with sales doubling every year and multiple wins at the SFWSC, a competition that uses a three-tiered, double-blind judging system to ensure quality above all?

Turns out there’s quite a good story to tell about Barrell, which we uncovered during a recent phone conversation with Beatrice.

The founder’s background is decidedly not whiskey

Beatrice is a former New Yorker who decamped to Louisville to pursue whiskey after 20 years in marketing and tech. Still, “I always loved whiskey and I was a home brewer,” he notes. “And I knew that I didn’t know a lot about the business — and knowing that is a skill, by the way! But I was able to apply what I did know, which was how to position and market a product, and create a unique framework.”

To that end, every Barrell release is limited edition, cask strength and “intentionally unique,” often with unusual finishes or spirits sourced from unlikely places (example: the brand’s new Barrell Rye Batch 003 is a blend of rye whiskies from Indiana, Poland, Tennessee and Canada, featuring a selection of 4, 6, and 14-year-old barrels).

Beatrice and master distiller Tripp Stimson source whiskey from 65 different suppliers, and not just from the U.S., but around the world. To create a new product, the Barrell team starts with a profile they’re “thinking about.” Then they’ll take samples from hundreds of sourced barrels and sort the results into different groups. They might end up with five different “sets” of whiskey, with 10 barrels of one type, 50 of another and so on. “Then we figure out how to optimize those and then replicate in the real world on a larger scale.”

All the blends are done in Louisville at an old data facility, with the one-time server room used for bottling. “So with that space, we can very stringent with temperature and humidity,” says Beatrice.

Their whiskey peers respect the process

No distillery? No problem, as other bourbon producers are certainly not turning up their noses at Barrell. “I come from the advertising, technology and internet world — now that’s competitive,” says Beatrice. “But bourbon is like America’s first open-sourced product. Everyone shares information and is really cooperative.”

The inspiration for Barrell hails from Scotland

Beatrice compares Barrell’s releases to merchant whiskies in Scotland, where high-end single malts were blended together and put out under a single brand name. “The difference is that we’re blending products from different states, ages, mashbills, yeasts, barrels and char levels,” he says.

The infinity bottle is a concept where you empty the last remnants of your various whiskeys into a single bottle. Barrell’s Infinite Barrel Concept expands on this idea; the brand takes 100 barrels of whiskey from around the world (from Irish whiskey to Scotch to Polish rye); for each bottling, they remove a portion of that whiskey and replace it with other barrels that will complement the remaining blend. Then they repeat the process … so you’ll find commonalities and differences with each new release.

Their award-winning Batch 21 was an unusual blend

Batch 21 was a blend of three distinct groups of whiskey, all hailing from Tennessee, Indiana and Kentucky. One was corn forward and buttery, one woody, and one that hailed from rare lower-proof barrels. “That third group was 85 proof, and usually you’ll find barrels in the 110 proof range,” says Beatrice. “Those lower-proof barrels have a roundness of flavor that’s beautiful.”

The result, as Barrell’s website suggests, is “a wonderfully autumnal bourbon built on a dry toasty backbone with hints of butter and fruit layered in for complexity and contrast.”

There’s more to Barrell than bourbon

The Double Gold winner Rye 003 uses ryes from Poland, Canada and the U.S. to create a nicely balanced blend with notes of dried fruits, honey, coconut and ginger. “It’s a beautiful combination that delivers something against the traditional rye, with a lot of subtleties underneath,” Beatrice suggests.

And their rums follow the same MO as their whiskey: they take juice from up to four different countries and marry the blend in bourbon, wine and Islay whisky barrels.

The company’s most popular release isn’t technically a whiskey

Dovetail started as a bourbon with some unique finishes. Unfortunately, the TTB decided it didn’t quite fit any particular class type of whiskey, so it had to be bottled as a declassified whiskey, “or basically the same category as something like bubblegum vodka,” as Beatrice notes. The company has to add a qualifier to each bottle, and they can’t put any age statement on them. So each bottle has the unwieldy title of “Whiskey Finished in Rum, Port and Dunn Vineyards Cabernet Barrels.”

You can find Barrell in 46 states. The latest releases from the brand are Barrell Bourbon Batch 023 and Barrell Rye Batch 003, but you’ll see a fair number of new bottlings throughout the year. You can order their releases online here.

These Are the Mothers of All Drinks
If You Can't Do This Balance Exercise, You're Likelier to Suffer Falls in Old Age
LIV Golf Defector Patrick Reed Hits Golf Channel With $750 Million Lawsuit
Guess What? Golf Is Good For You.