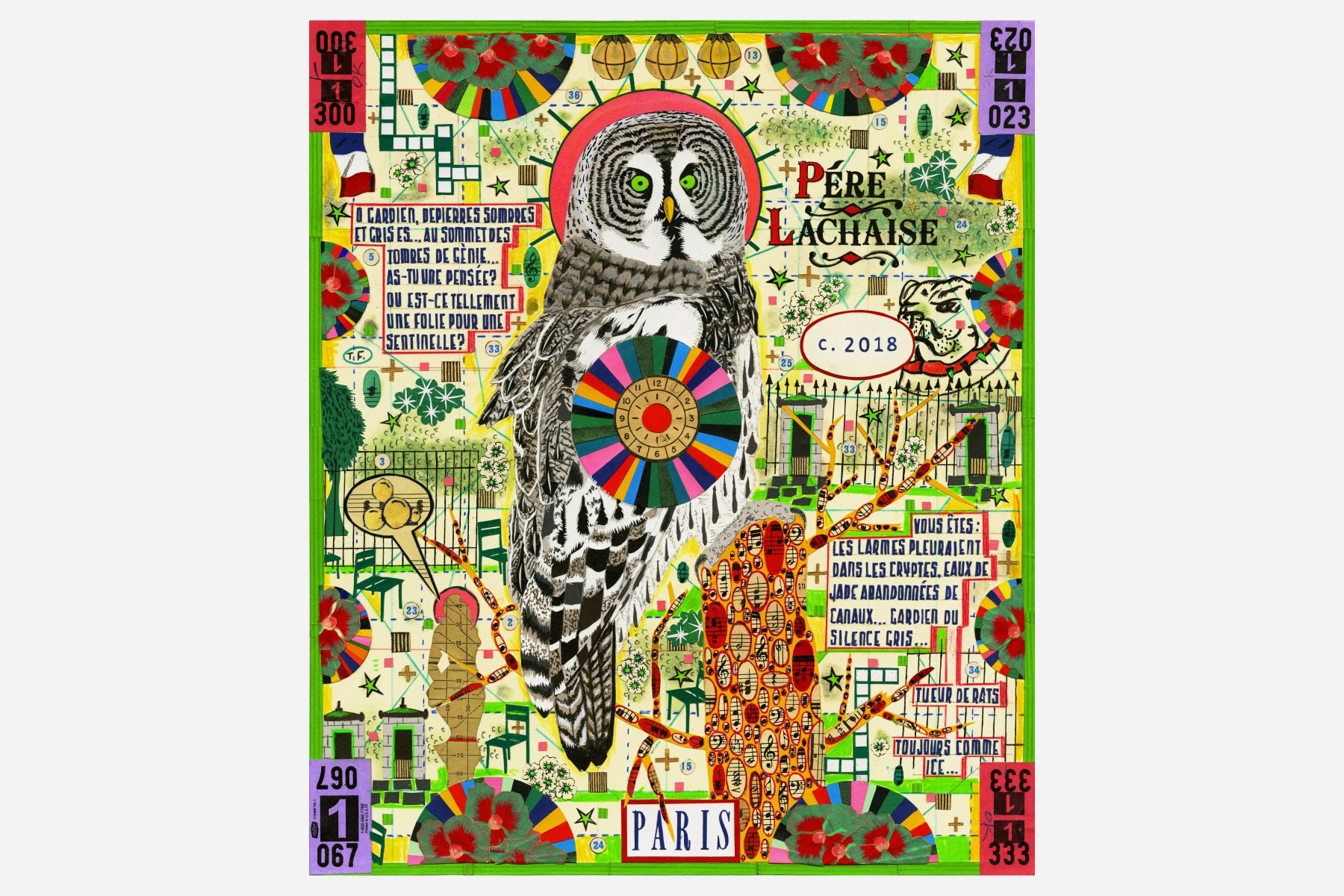 Tony Fitzpatrick is known around the City of Big Shoulders for many things.

Principally, he’s a born-and-bred Chicago visual artist whose intricate multimedia collages and paintings often weave in images of the city near and dear to his heart: street culture, religious iconography, comic books, baseball cards, matchbooks and birds are all objects of his affection. His work can be found in the Art Institute of Chicago, Museum of Modern Art in New York and the Philadelphia Museum of Modern Art, as well as on album covers ranging from Lou Reed and the Neville Brothers to Steve Earle. In 2015, he opened The Dime, a gallery that helps promote new artists by receiving no percentage of sales from their exhibits. He’s a writer too, whose unvarnished viewpoint of the world around him, whether in poems, plays or books, doesn’t pull any punches. And he’s also an actor, who recently had a recurring role on Amazon’s Patriot.

That all changed when he, like so many of us, needed to make some financial changes, and fast. “The sky was falling and I was scared shitless,” he says. “I needed a Plan B.”

It was about a month ago, while feeding the ducks and geese on a regular visit to Humboldt Park near his home, that the puzzle idea took hold. “Everywhere I looked on social media, people were doing jigsaw puzzles,” he says. “I thought since my work follows its own rules and logic, perhaps it could lend itself well to that.”

With encouragement and help from his wife and kids — who, for the record, had been pushing the idea for a while — Fitzpatrick got the ball rolling on a series of four puzzles, two geared towards children and novices (108 pieces) and two for adults (672), priced at $30 and $40, respectively. “We ordered a few hundred and I thought, Okay, maybe we’ll sell a few and make a little bit of money,” he says.

On April 13, he posted a tease on his Facebook page with images of the puzzles — “Koi for Li-Po,” “Bird for Gabriel Garcia Marquez,” “Volo” and “Lake Michigan Sea Monster” — in their boxes. Three days later, at 9 a.m., the 460 or so puzzles went on sale via his website. Within 16 minutes they sold out. Or as a fan posted on Facebook: “It was like getting concert tickets or checking in on Southwest. I had phone in hand. 8:59 a.m. 9:00 a.m. Boom! Clicked and ordered that puzzle.”

Reassured they were on to something, Fitzpatrick and his employees, er, family, quickly organized a second, larger order of four new puzzles, including editions of 1,000 pieces after numerous requests. While Fitzpatrick would be happy to just feature his bird-focused art, his wife and kids convinced him to mix it up. Included in this second batch, which will be available in about 30 days, is one of his more iconic pieces, “A Thousand Beautiful Things,” inspired after seeing the great New Orleans singer John Boutté do his rendition of that lovely Annie Lennox song. And, yes, there will be birds too, including “Absinthe Bird in Belleville,” “The Autumn Saint (The Saint of the Red Children)” and “The Watchman of Pére Lachaise.” Moving forward, the plan is to create four to five new puzzles a month, with preordering as an option. “I’ve got a very deep catalogue of images,” says Fitzpatrick.

In addition, a selection of Fitzpatrick’s 1,000-piece puzzles will be available for sale at The Metropolitan Museum of Art’s Mezzanine Gallery in the near future. “Fitzpatrick has been in The Met’s collection since 2010, and we are pleased to premiere a series of his newest creations alongside a selection of his graphic work,” says Laura Einstein, manager of the Mezzanine Gallery.

Beyond the more well documented benefits of doing jigsaw puzzles — better problem-solving skills, improved mood, lower stress levels — Fitzpatrick’s have an additional bonus: “Putting them together is also a great tactile experience of how I make my work,” he says. Plus, he adds, “Anything that can help take people’s minds off of this shit is a good thing.”