This year alone, roughly 5,000 firearms have been caught at TSA checkpoints around the country...many of them loaded

How could you forget to leave your gun at home?
Getty
By Lindsay Rogers @lndsrgrs

There are a handful of prohibited items that even the most seasoned travelers forget to remove before passing through TSA checkpoints: a bottle of water, sunscreen in excess of 3.4 fl. oz., maybe even a pocket knife. These are things that you could forgive someone for forgetting they stashed them in the front pocket of a backpack a long time ago.

That same reasoning does not apply when you’re talking about loaded guns.

Yet, despite the $1,500 civil fine attached to getting caught with a gun at a TSA checkpoint — $3,000 if it’s loaded, which is apparently usually the case — this hasn’t stopped gun owners from attempting to bring firearms at almost the same frequency.

In fact, according to a new report from Forbes, somewhere in the vicinity of 5,000 guns have been caught at TSA checkpoints around the country so far this year, meaning that the agency is already shaping up to beat last year’s record of 5,972. To put that into context, $52 million in civil penalties have been levied against travelers attempting to bring guns through airports over the course of the past three years. This year alone, there have been upwards of $20 million worth of fines imposed…and that’s with two months left to go. 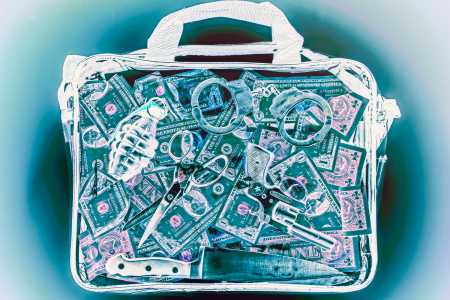 Granted, the agency is no stranger to finding contraband in carry-ons (a quick perusal of the official TSA Instagram will tell you as much). But in some states, trying to bring an undeclared firearm through an airport actually warrants criminal charges. So what gives?

“In New York, somebody brings a firearm to a checkpoint, they’re going to get a perp walk out of the airport in handcuffs,” the TSA official said. “In a more permissive gun state, that’s not going to be the case. Local law enforcement may tell the traveler, ‘Hey, go lock that thing up in your vehicle and then come back and go through security again.’”

Of course, there are ways to legally travel with a gun. For the uninitiated, you may — according to TSA’s guidelines — transport unloaded firearms in a locked hard-sided container as checked baggage only, and only after its been declared to the airline at the ticket counter. The container must also completely secure the firearm from being accessed.

In other words: never loaded, and never in your carry-on.

American Airlines Announces the End of Its AirPass Program