Chattanooga Man Sues Popeyes for Running Out of Chicken Sandwiches

"I have this sandwich on my mind. I can't think straight," Craig Barr says

A Chattanooga man is heated about not being able to get the new spicy chicken sandwich from Popeyes.

In a civil lawsuit he filed earlier this week to a Hamilton County circuit clerk, Craig Barr has accused Popeyes of false advertising and deceptive business practices for running out of their $4 chicken sandwiches at multiple locations in Tennessee, according to The Times Free Press.

Barr alleges he has spent “countless time driving” to and from four area Popeyes locations and that he cracked a $1,500 rim on his car in the process.

“I can’t get happy; I have this sandwich on my mind. I can’t think straight,” he told the Times Free Press on Thursday. “It just consumes you. It’s totally deceptive. Who runs out of chicken? It’s a big fiasco. Someone has to stand up to big corporate. Everyone is captivated by these sandwiches. They’ve got everyone gassed up on them.” 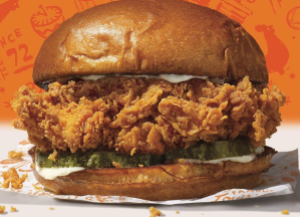 Barr was so desperate, he responded to a Craigslist ad posted by a man claiming he had a friend who worked at a Popeyes and had stashed a supply of the chicken sandwiches. According to Barr, he met with the alleged worker behind a Popeyes and paid him $25 for one of the sandwiches. The man went into the store and never came back with any chicken. When Barr went inside to investigate, he was told the man walked in the restaurant, bought something, and left.

Barr, who owns a company in the automobile industry, told the Times Free Press he was “humiliated when his friends laughed at him.”

Barr’s suit is seeking $5,000 – which could buy him approximately 1,250 chicken sandwiches (excluding tax).

So, Megan Fox and Machine Gun Kelly Are Super Weird
Neil Patrick Harris on the Sweet Science of “Remixing” Negronis
James Bond Didn’t Deserve Timothy Dalton
10 Health Experts Name the One Smoothie They Can't Live Without
The Myth of the Red Hot Chili Peppers Is Better Than the Band I Remember