Fiona Apple's New Album Isn't for Men, But They Should Listen Anyway

A little more than halfway through her stunning new album Fetch the Bolt Cutters, Fiona Apple makes it absolutely clear who she’s talking to: “Ladies, ladies, ladies, ladies,” she repeats, seamlessly shifting her inflection with each delivery. At times she sounds weary and disappointed, like an exhausted middle-school teacher breaking up a fight; other times, she sounds conspiratorial, ready to usher us into her basement for a sleepover and show us where her parents keep their booze. Sometimes she’s loud and serious; elsewhere she’s goofy, playing with the syllables until they’re not so much words as sounds: “LAYdies, ladies, ladies, lAYdies…“

Men will quickly realize this is not an album “for them,” and they might, understandably, feel like they’re trespassing. (It’s an argument we saw last year when wondering whether men would see Little Women: “Some of it is out of a sense of deference,” Monica Hesse explained on NPR. “Like, ‘this story and this book has been so important to women that I don’t want to go if it’s supposed to be a sacred space for women. Will it be OK if I go?’”) Of course, if you’re at all familiar with Fiona Apple and her work, you know that making music “for” anyone other than herself has never been a concern; accessibility and accolades have been low priorities ever since she famously declared, “This world is bullshit” onstage at the VMAs. In fact, Fetch the Bolt Cutters sees her at her most unabashedly weird: it’s full of dog barks, dolphin noises and a disregard for any kind of traditional pop structure.

But, of course, there’s immense value in consuming art that isn’t “for you,” in trying to experience the perspective of someone inherently different from you. The trick is to surrender yourself to the fact that it’ll be impossible for you to ever fully get it in a way that someone who has lived those experiences will. Instead — and men, this is a good rule of thumb for interacting with women in general — you should just shut up and listen.

If you do, you’ll find plenty of valuable lessons on Fetch the Bolt Cutters, some of which may make you uncomfortable. On the excellent “For Her,” inspired by righteous anger over the Brett Kavanaugh hearings as well as the sexual assault of an unnamed friend, she acknowledges how rape culture has allowed some men to walk through life clueless about their own transgressions (“You know you should know but you don’t know what you did,” she sings) before laying it out directly: “You raped me in the same bed your daughter was born in.” “Relay” sees her pondering forgiveness with a line (“Evil is a relay sport, when the one who’s burned, turns to pass the torch”) she wrote decades ago, shortly after her own rape at the age of 12.

“I wouldn’t allow myself to be angry at him because of shit I assumed had been done to him,” Apple recently told Vulture. “I think women do that a lot. We’ll be like, ‘Oh, but he was hurt when he was a kid. That’s why he did that to me.’ Fuck you, I was hurt when I was a kid. I didn’t do it to him. You know? We’re very understanding, women. We want to take care of people. We want to protect people. But, please, not at the expense of ourselves anymore.”

That’s why on “Ladies,” she invites an ex’s new love interest to “please be my guest to whatever I might have left in his kitchen cupboards, in the back of his bathroom cabinets.”

“This album is a lot of not letting men pit us against each other or keep us separate from each other so they can control the message,” she explains in that same Vulture interview. “I remember my grandmother used to talk about my grandfather and his mistress. And his mistress actually was his wife for the rest of his life. They were married for 50 years. But to her, she was always mad at this mistress. And it was always like, ‘Man, she didn’t do it. Our grandfather did it. Your husband cheated on you. She just fell in love with some guy. Then they were together forever afterwards and had a family. Be mad at the right person, don’t feel mad at the wrong person.’ Later on in life, I’m with a guy. I found out he’s seeing some other woman. I meet that other woman — I’m nice to that other woman. She didn’t do it. She didn’t cheat on me.”

Ultimately, Fetch the Bolt Cutters is a record about taking up space, making yourself heard, saying everything out loud, even the ugly stuff people don’t like to hear. I can do my best to explain what hearing those things is like, how the realization that you’re not alone or crazy and the things you’ve been experiencing every day for as long as you can remember are, in fact, a societal ill and not a “you” problem, how hearing someone like Apple articulate it so artfully can make you angry and sad but still feel like a goddamn miracle, but you won’t be able to feel it unless you’ve lived it. So all you can do is listen.

When you do, you’ll find plenty of humor sandwiched in between the heavy moments. On “Under the Table,” Apple warns her companion that “I told you I didn’t want to go to this dinner” before refusing to be shushed (“I would beg to disagree, but begging disagrees with me”). On “Rack of His,” she plays with the female gaze, directing it instead to her musician object of affection’s gear — “Check out that rack of his, look at that row of guitar necks” — before admitting “I thought you would wail on me like you wail on them.”

Everything is rooted in female perspective — Apple’s perspective — but of course, this isn’t just a “women’s album.” (Nothing ever is … we possess the full range of human emotion and independent thought, just like men do!) “Heavy Balloon” and its depiction of depression will hit home for anyone, whether you’ve struggled with the mental illness yourself or simply watched a loved one go through it (“People like us, we play with a heavy balloon/we keep it up to keep the devil at bay but it always falls way too soon,” Apple sings, before admitting, “I’ve been sucking it in so long that I’m busting at the seams”). And the title track, “Fetch the Bolt Cutters,” is for anyone who has ever felt the need to break free of some sort of figurative prison — and who among us hasn’t?

As a whole, the record is raw and unconventional, but it’s also surprisingly uplifting, exactly what we needed at this moment in time. It is, ultimately, just a really fantastic piece of work, one absolutely worthy of Pitchfork’s first 10.0 score in a decade.

The acclaim’s been pretty universal so far. But why did it so long for us all to recognize her genius? As music journalist Marissa Moss tweeted on the day of Fetch the Bolt Cutters‘s release, “There is a whole generation of women who had male friends or boyfriends in ’96 who talked over us about Weezer when we tried to scream about Fiona; that quiet anger over the rate at which the world warms to female genius has been in our guts for decades now, honestly.” That’s not so much a knock on Weezer as it is a lesson in how to appreciate art made by women; decades later, men have grown more comfortable listening to music that isn’t “for them” and realized they’ve been missing out. As Stereogum’s Tom Breihan wrote in a 2016 Tidal retrospective, “She looked like a Calvin Klein model, she wrote pretty songs, and in the ‘Criminal’ video, she came off like a scared kid in a sexed-up, drugged-out stupor, which was a big thing in that moment … Because of all those things, it was all too easy to dismiss Apple, to laugh at that acceptance speech and at everything else she did. But those of us who did dismiss her missed out on some powerful things — things that would only become obvious a few years later, when Apple’s music was so evidently powerful that we couldn’t keep ignoring it. Things like that acceptance speech.”

That speech gets remembered most for the “bullshit” line, for Apple spitting out more wisdom as an objectified teen than most adults could ever hope for. But in that same speech, Apple took a moment to paraphrase Maya Angelou’s Even the Stars Look Lonesome, saying, “Maya Angelou said that we, as human beings, at our best, can only create opportunities. And I’m gonna use this opportunity the way that I want to use it.”

She’s managed to do that throughout her impressive career, and when it comes down to it, that’s exactly what Fetch the Bolt Cutters is — to you, to me, to all of us — an opportunity to listen. 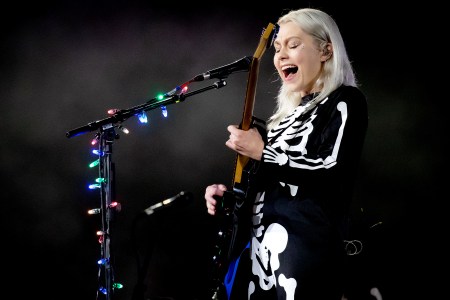 All the Grammy Nominees for Best Rock Performance Are Women