LSD Turns 75: What a Long, Strange Trip It’s Been 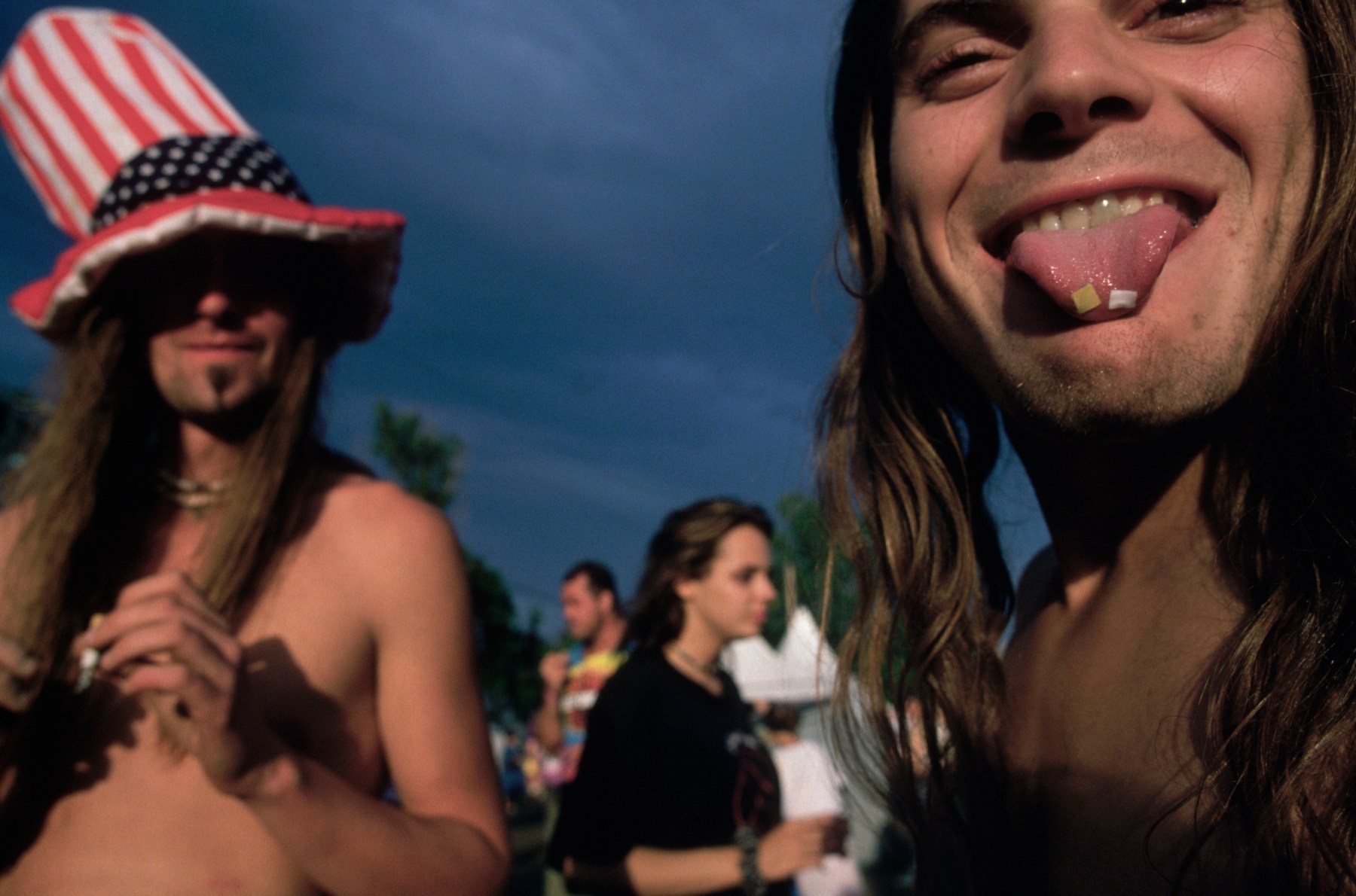 It would be another 24 years until Jimi Hendrix would release “Are You Experienced,” but Albert Hofmann became the first person in history who could conceivably answer in the affirmative to that when he discovered LSD’s hallucinogenic effects after accidentally dosing himself on April 16, 1943.

The Swiss chemist stumbled across the drug while testing the medicinal value of lysergic acid compounds and, after consuming it accidentally and experiencing “an intoxicated-like condition characterized by an extremely stimulated imagination,” Hofmann took it again three days later.

Now known as “Bicycle Day” because of the mode of transportation Hofmann used to get home, April 19, 1943, was the date of the first intentional trip – but the first overall trip in history marks its 75th anniversary today.

To help mark 75 years of “fantastic pictures” and “extraordinary shapes with intense, kaleidoscopic play of color,” we’ve tabbed up a list of 75 times lysergic acid diethylamide worked its magic or impacted history, for better or worse.

3. 1953: In a project called MK-Ultra, the CIA begins experiments to assess the potential use of LSD and other drugs for mind control, information gathering and psychological torture.

5. 1967: Despite allegedly not taking drugs himself, Salvador Dali paints “The Mountains of Cape Creus on the March (LSD  Trip)” using ink and watercolors. 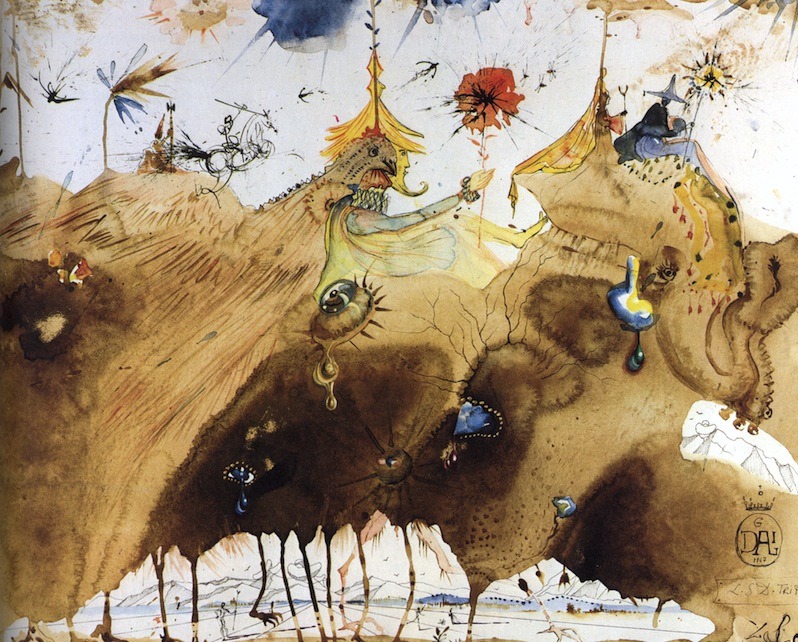 7. 1965: The manufacture, sale, possession and use of LSD is made illegal in the United States.

8. November 2015: Microdosing on around 10 micrograms of LSD to increase productivity starts to become popular at Silicon Valley companies.

9. 1947: Psychiatric researcher Werner Stoll publishes the first article on LSD in the Swiss Archives of Neurology.

10. 1966: Leary is dismissed from Harvard and founds the League of Spiritual Development with LSD as the sacrament.

12. August 15, 1969: Woodstock opens in Bethel, New York, eventually leading to the infamous warning to stay away from the brown acid.

17. March 2014: Government testing of LSD resumes for the first time in decades with 12 terminally ill subjects serving as the test patients.

18. August 1966:  Jim Morrison returns to the studio on LSD and sprays the band’s equipment with a fire extinguisher after The Doors record “The End.”

20. May 1966: Jimi Hendrix takes LSD for the first time at the Cheetah Club in New York City, after which he told a friend he”looked into the mirror and thought I was Marilyn Monroe.”

21. November 27th, 1965: The Merry Pranksters and Kesey hold the first Acid Test in California with a group called the Warlocks as the house band.

22. August 3, 1977: A hearing about MK-Ultra is held in front of the Select Committee on Intelligence and Committee on Human Resources in Congress.

23. August 16, 1969: Carlos Santana takes acid at Woodstock and plays his set high after being forced to go on earlier than anticipated.

26. April 1970: Jefferson Airplane singer Grace Slick’s plan to spike Richard Nixon’s tea with LSD at a White House tea party is derailed when security deems her to be a security risk.

27. December 4, 1965: The Warlocks play their first show at an Acid Test under the name of the Grateful Dead.  The name sticks. 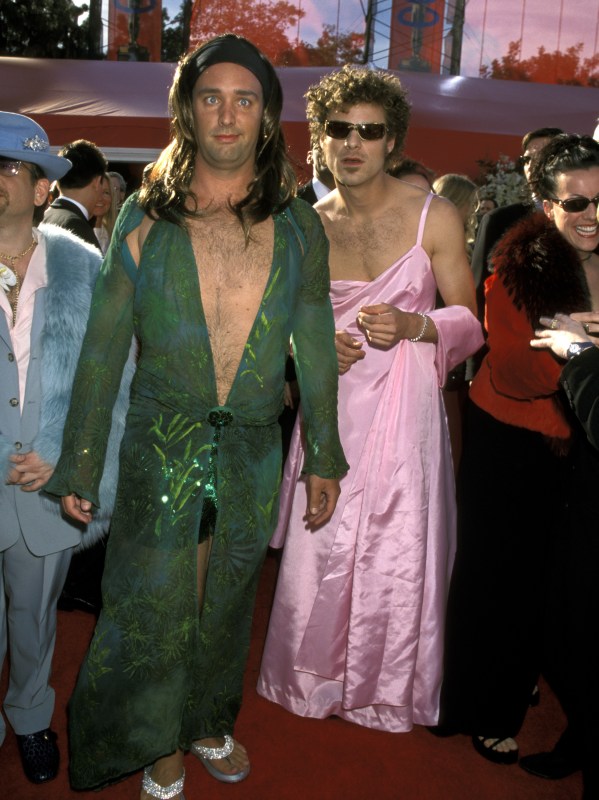 29. 1972: Apple founder Steve Jobs takes acid while attending Reed College, an experience he later refers to as “one of the two or three most important things I have done in my life.”

31. January 1970: Author, journalist, comedian and Merry Prankster Paul Krassner testifies at the trial of the Chicago 7 while high on acid.

32. October 1969: George Carlin does acid for the first time at a jazz club in Chicago called Mister Kelly’s and calls it a “profound turning point for me.”

33. Spring 1965: John Lennon and George Harrison have sugar cubes dosed with LSD slipped into their tea by a friend at a dinner party and trip for the first time.

35. 1964: Kesey purchases the 1939 International Harvester school bus that becomes known as Furthur eventually carries the Merry Pranksters across the U.S. 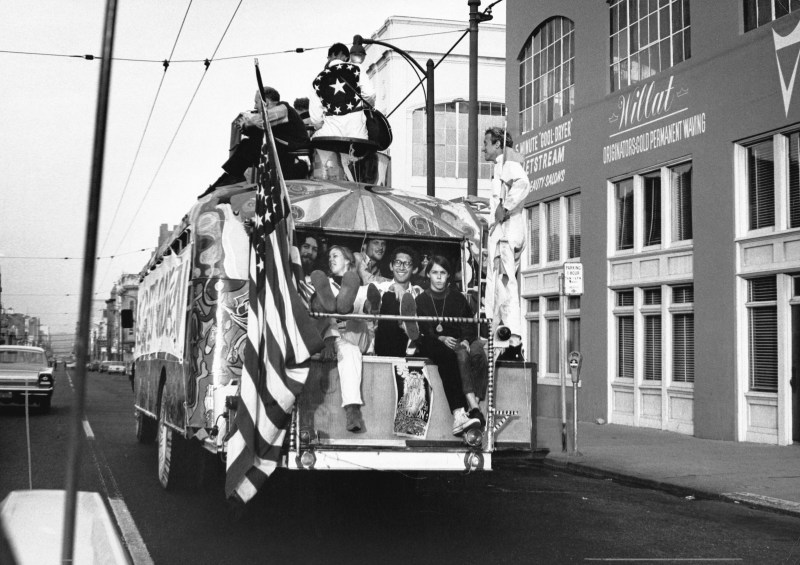 37. August 24, 1965: Lennon and Harrison convince Ringo Starr to take acid with them along with Peter Fonda and the Byrds.

38. February 28, 1953: The double helix, the twisted structure of DNA, is discovered by James Watson and Francis Crick. Despite, reports to the contrary, Crick was not on LSD at the time – although he was known to take the drug.

39. 1968: Tom Wolfe’s nonfiction book about psychedelic drugs and the Merry Pranksters, “The Electric Kool-Aid Acid Test” is published for the first time.

40. June 1967: Jefferson Airplane’s “White Rabbit,” which Slick composed while on LSD, is released.

42. December 13, 1965: After the other three members of the Fab Four have done it, Paul McCartney gives in to peer pressure and takes acid for the first time.

43. Fall 1965: Bob Dylan tells Playboy interviewer Nat Hentoff that LSD is a medicine. “You know, you take it and you know … you don’t really have to keep taking it all the time,” he said.

44. 1965: Owsley “Bear” Stanley’s Bear Research Group sets up shop in California and goes on to produce more than a million hits of LSD doses. He becomes known as “Mr. LSD” on the West Coast.

47. 1964: Douglas Engelbart helps to build the first computer mouse prototype after experiencing LSD a the International Foundation for Advanced Study.

50. August 5, 1966: Heavily influenced by their experiences with LSD, the Beatles “Revolver” is released.

52. Spring 1965: Brian Wilson of the Beach Boys comes up with the chords for “California Girls” after taking LSD for the first time.

54. 1959: Poet Allen Ginsberg takes LSD for the first time during a government experiment.

55. 1975: Artist Alex Grey has a “spiritual awakening” upon taking LSD for the first time and the experience influences his work in a big way. 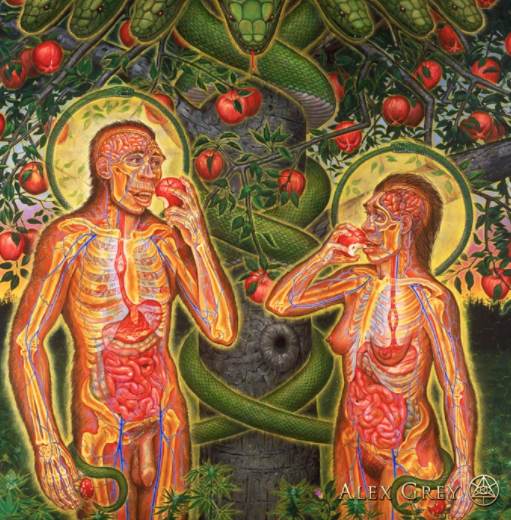 56. 1970: Original Fleetwood Mac guitarist Peter Green leaves the group because of drug use including LSD, later saying “I guess I took one trip too many.”

58. March 21-23, 1971: Hunter S. Thompson takes LSD at some point, or multiple points, on the trip that will eventually become the basis for “Fear and Loathing in Las Vegas.”

59. October 2015: A Reddit user watches “The Simpsons” for two days straight while eating acid in order to find a hidden truth in the series.

60. December 15, 2017: Netflix’s “Wormwood,” a docudrama miniseries based on the life of MK-Ultra scientist Frank Olson, is released.

61. June 24, 2011: In an interview with The Guardian, Wilson says that his past LSD use increased his creativity, but also “f-cked with my brain.”

64. 1993: Timothy Leary records his version of a public service video called “How to Operate Your Brain” that attempts to demonstrate his “turn on, tune in, drop out” philosophy.

65. 2017: An app called Wavepaths that guides users through trips which was developed by musician Brian Eno and neuroscientist Dr. Mendel Kaelen is released.

66. June 17, 1964: The Furthur bus departs La Honda, California, on its maiden cross-country voyage with Neal Cassady at the wheel.

67. 1954: Dr. Oscar Janiger conducts the first of a series of experiments that will see him administer almost 3,000 doses of LSD to 1,000 volunteers over an eight-year period.

68. March 16, 1967: The final Acid Test involving Kesey and the Merry Pranksters is held in Houston at  Houston at Rice University.

69. February 12, 1966: At the Watts Acid Test, event MC Wavy Gravy warns attendees a trash can full of liquid “is the electric Kool-Aid.”

71. August 18, 1969: Hendrix performs the “Star Spangled Banner,” allegedly while wearing a bandana that had been soaked in LSD.

72. September 1970: Artist and illustrator Ralph Steadman takes LSD for the first and only time with Thompson and it greatly impacts his career and work.

73. March 21, 1967: John Lennon accidentally takes LSD in the studio while working on songs from “Sgt. Peppers,” allegedly the only time he took acid while recording.

74. February 11, 1965: Owsley becomes Grateful Dead’s sound engineer and the band goes on to write the song “Alice D. Millionaire” after a newspaper article describes him as the “LSD millionaire.”

75. November 22, 1963: Huxley requests a shot of LSD on his deathbed as he loses his battles with cancer.