How to Ride an E-Scooter in Chicago Without Dying

The Westside is now overrun with rentable scooters. Here's what you need to know to stay out of the hospital. 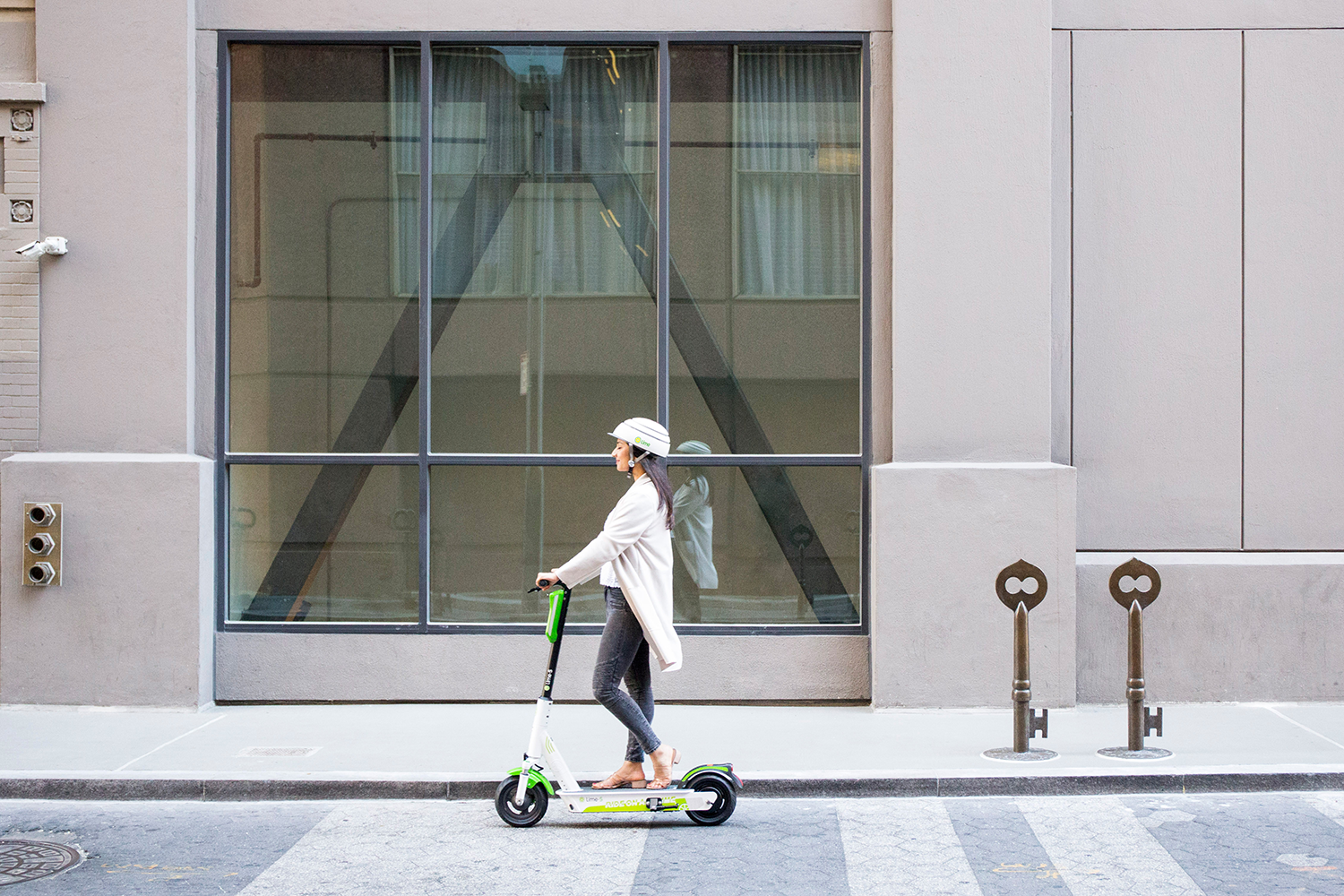 It’s been one whole month since swarms of electric scooters began flooding Chicago’s sidewalks, introducing the city’s denizens to a transportation alternative that’s as fun as it is sustainable. The four-month pilot program invited 10 private companies to dole out a collective 2,500 dockless e-scooters in a sanctioned  50-square-mile stretch spanning the northwest, southwest and far west sides. As one might imagine, westsiders jumped at the chance to get to know these curious two-wheeled invaders, racking up a total of 60,000 trips during the course of the program’s first week.

But it hasn’t exactly been a scoot in the park. According to Streetsblog Chicago, nearby hospitals documented 21 scooter-related injuries during the pilot’s first two weeks, some serious enough to warrant surgery.

On June 20th, a person riding an e-scooter the wrong way down a one-way Wicker Park street collided with a bicyclist and then sped off, leaving him unconscious and bleeding on the street. The 32-year-old biker, Allyson Medeiros, required several surgeries and is now taking all 10 e-scooter companies to court in an effort to track down the hit-and-run perpetrator. Streetsblog later reported that a biker intentionally shoved a rider off their scooter that same week, resulting in multiple serious injuries.

Less violent offenses like hangings scooters from tree branches, leaving them overturned and defacing them with graffiti have also been an issue, and just last week the city issued hefty fines to seven of the 10 vendor companies for rules violations.

Which is all to say now is the perfect time to (re)acquaint ourselves with the ins and outs of e-scooting, reflecting on what we’ve learned over the last 30-odd days to ensure a brighter, safer and smoother (seriously, those potholes need to GO) tomorrow.

The program is fueled by 10 different companies: Bird, Bolt, grüv, JUMP (owned by UBER), Lime, Lyft, Sherpa, Spin, VeoRide and Wheels. Each vendor maintains their own app, e-scooter model, and rental rates (usually between $.15 and $.30 per minute). All you have to do is download the app and create an account to locate to reserve an available scooter. Most e-scooters are tagged with a QR code that you scan to unlock your ride and some apps make you watch a safety video or go over some brief rules before you kick off. While the e-scooters differ slightly in size and shape, all have two wheels, a standing platform, and a waist-high handlebar for steering, acceleration and braking. The companies are also responsible for collecting their e-scooters at 10 p.m. every night and returning them to the streets at 5 a.m. every morning.

As long as you keep within the pilot program’s boundaries — basically Irving Park Road, the Kennedy Expressway and the Stevenson Expressway — the west side is your oyster. Try to avoid busy streets without bike lanes and small side streets that are more likely to be riddled with potholes. E-scooters aren’t allowed on the 606 elevated trail, but you can cruise to your heart’s content through Douglas and Humboldt parks. Many commuters use them to bridge the gaps between bus stops or CTA stations.

The Dos and Don’ts

DO use bike lanes

Some cyclists may give you a hard time, but designated bike lanes are still the safest place to scoot by far. If you’re not sure where to find them, download a handy 2019 CDOT bike map here or follow the biking directions on your phone’s GPS. Just keep the peace, announce when you’re passing, try not to tailgate and don’t cut anyone off, and you should be fine.

DO obey all traffic laws

That means hitting the breaks at stop signs and lights, signaling before you turn, never riding the wrong way down a one-way street, stopping for pedestrians in crosswalks and generally trying to be an upstanding member of society.

DO wear a helmet

They’re not required (yet), but judging from the amount of injuries sustained so far, they probably should be. Protect that noggin.

DO walk your e-scooter on the sidewalk

You can’t ride on the sidewalk, but you’re welcome to calmly wheel your e-scooter wherever you need to go as long as your feet stay on the pavement.

Most of the apps will tell you this before you ride and it’s damn good advice: these guys aren’t designed for shredding. (Though, as my fiance said when confronted with this rule, “Steep inclines? In Chicago?”)

DO park near bike racks

This is an important one. As you would with a bicycle, make sure to leave your e-scooter upright and near bike racks, street signs or retired parking meters when you’re finished with it. Ditching your wheels in the middle of the sidewalk, tipped over or in a parking space is a total jerk move.

DO snap a photo when you’re done

Some apps will keep charging you if you don’t upload a photo of your e-scooter proving that it’s properly parked and in good shape after ending your ride. And even if the app doesn’t require it, it helps them avoid more fines, so just do it.

This is a biggie. That lustrous, even concrete might look tempting, but the only thing more rude than riding your bike down the sidewalk is zipping past old folks with walkers and crying babies in strollers aboard a godforsaken electric scooter.

The e-scooters were built to max out at 15 MPH, as per city regulations. You might be able to get more speed depending on your size, where you’re riding, or how hard you kick off, but you really shouldn’t.

DON’T wear headphones, text or talk on the phone while riding

You’re in traffic, for crying out loud!

DON’T give anyone else a lift

These e-scooters were designed to be a one-man operation, so it’s against the rules (not to mention dangerous and probably a little sweaty) to scoot with a buddy on board.

DON’T scoot down the 606 Trail

According to the officials, public parks that fall within the test zone are fair game, but the scenic 606 is off limits. Bummer.

DON’T take them on the train

E-scooters aren’t allowed on any CTA bus or train or inside CTA stations, so stick to the street. (Plus, if you’ve rented a scooter you should probably just … ride it?)

DON’T take your (young) kid for a ride

As item 16 of the city’s E-Scooters Pilot Program Terms clearly states, “Vendors shall not rent their scooters to any individual who is under the age of 18 years old as part of the pilot program. Provided, however, vendors may rent scooters to any individual who is 16 or 17 years old with the consent of the parent or guardian of such individual.” The apps work their magic to verify your age.

Thanks to geo-fencing, if you try to leave the designated test zone, your e-scooter will quickly slow down and power off, leaving you stranded with a heavy, completely useless object and extra charges on your rental bill.

DON’T expect it to be easy … or cheap

The first time I attempted to conquer an e-scooter, I was truly surprised by how un-bike-like it was. Unless you’re already a seasoned scooter or skateboarder, standing up with such a high center of gravity can be a bit disarming. And thanks to the Ukranian Village’s endless network of gaping potholes and ripped up concrete, the relatively small wheels and lack of effective shocks made for a particularly bumpy ride. It took me about half my ride to get the hang of things, but I still wasn’t confident enough to venture off the leafy residential streets and onto a major thoroughfare.

It’s also not exactly a bargain. While JUMP’s $.30-per-minute rental rate sounds like chump change, it can really add up, especially when you consider the $1 unlocking fee and the fact that it starts charging you when you reserve your e-scooter, not when you unlock it. My journey consisted of 25 on-scooter minutes and cost me a little over $10. An UBER to the same destination would have taken 10 minutes, set me back around $6 and included air conditioning. But hey, where’s the fun in that?