A pre-pandemic two days with Kirk Hammett and Robert Trujillo 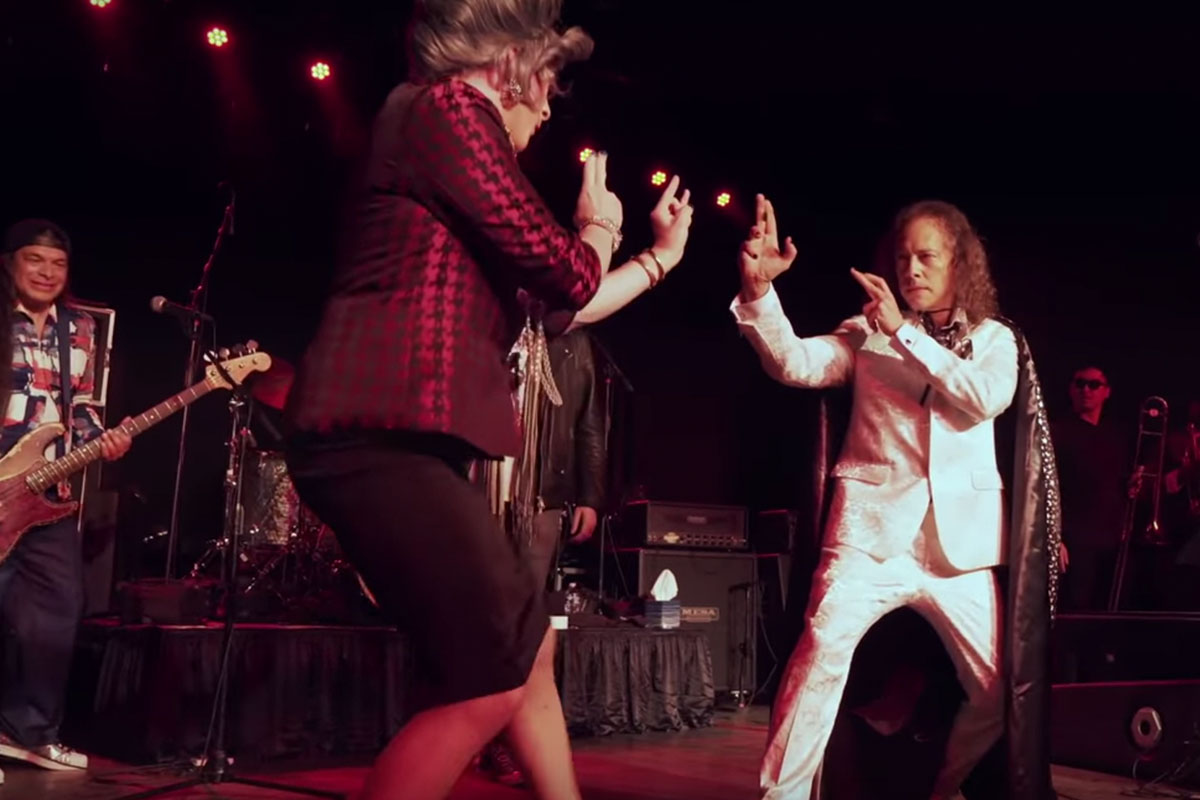 “Hey, have some free stuff.”

Those are the first words I hear from Kirk Hammett, who hands me some pins and stickers emblazoned with the Blackened whiskey logo just as I land backstage at The Senate, a tiny concert hall in Columbia, SC.

You’d think the long-time Metallica guitarist wouldn’t need to sell me on anything. He’s a guitarist for Metallica. He’s part of an iconic heavy metal band that was also the first concert I ever paid to see … and his bandmate Robert Trujillo, also in tow, was part of the second show I ever paid to see (during his stint with Suicidal Tendencies).

But here in early March — just a few days before we all pretty much lost the idea of hanging out in public for the foreseeable future — Hammett and his bandmate Rob Trujillo are more than happy to talk whiskey. And art. And surfing. And cover songs.

See, it’s off-time for Hammett and Trujillo, as Metallica had recently cancelled its most recent tour. Which left the rest of the band with time on their hands.

So the duo hit the road, and they brought along the guitarist’s massive collection of sci-fi and horror memorabilia, which this spring is (albeit now virtually) being displayed at the Columbia Museum of Art. On this early March weekend, the museum was hosting a black-tie fundraiser with Hammett as guest of honor.

As for the whiskey (and yes, some members of Metallica do not drink), it’s only been a few years since the metal icons launched Blackened, a marriage of bourbons, ryes and whiskeys finished in black brandy casks that takes on the metal band’s true spirit via a process called “Black Noise.” Simply put, the whiskey is agitated and pummeled with curated playlists of the band’s music, a sonic enhancement process that seems to have some scientific validity.

While they’re in town for art and whiskey, Hammett and Trujillo were also there to play some music, as part of a cover group called The Wedding Band. The all-star group with ex-Ugly Kid Joe frontman Whitfield Crane on vocals, TWB mixes old-school metal (Sabbath, Dio, etc.) with some classic funk workouts — and, that weekend in Columbia, they also showcased a live “wah-off” between Hammett and guitar goddess Mrs. Smith.

With a few hours to go before Sunday’s concert, we spoke with Hammett and Trujillo about all of their non-Metallica interests that are keeping the duo busy.

InsideHook: Kirk, how did you get interested in horror and sci-fi posters and props?

Hammett: I started in the early 80s, right about the time Metallica released Ride the Lightning. I think my first few paychecks went to monster magazines and comics. Horror and sci-fi’s always been closest to my heart. I’m very partial to those movies and especially the look of those posters.

And having this art show is a good opportunity. A lot of other things can come out of this too, whether it’s Blackened or The Wedding Band.

The team behind your whiskey is in town. How did you guys end up creating a spirit?

Hammett: The opportunity came to put out our own, and unlike vodka, whiskey was something we could literally shape and mold.

Trujillo: And we had an opportunity to collaborate with [the late] Dave Pickerell, who’s really the godfather of whiskey and also a guy who was super passionate about music. We had a great connection with him, so the stars aligned. There’s this master distiller, and here’s this master of metal band, what the hell, let’s join forces! (Editor’s Note: The master distiller for Blackened is now Rob Dietrich; you can read our interview with him here.)

Also, when I played in Ozzy Osbourne’s band, I was nicknamed the Whiskey Warlord (laughs). So for me, this was a rebirth.

You mentioned shaping the whiskey. Do you think the band’s music actually affects the whiskey’s taste?

Hammett: It totally makes sense to me. It’s moving molecules with sound. When it’s in barrels, I pick out songs that are tuned down and have a lot of low end, and so did Rob. But I also have a fast playlist, because maybe those songs would spin the whiskey in a different way.

How did you guys start playing cover songs?

Trujillo: It all originated from a wedding, hence the title of the band. Kirk and I have a friend in Hawaii — we’re all active surfers, and our buddy is a pro surfer — and we were going to be there anyway for his wedding.

Trujillo: It’s a real wedding band! We played on this tiny stage with what I call hood-rat equipment and basically a Toys R Us drum set. But it ended up great and we got offered another gig. It sparked a flame — this show tonight is like our fourth show. We’re playing metal but also some obscure funk rock songs from the ‘70s we both love. In my dreams, I’d be playing these songs at some time in my life, and that time is tonight.

What’s next for you guys?

Trujillo: Everything’s a work in progress, but it’s passion driven. Even like tonight, what we’re doing, we’re excited, but also nervous in a good way. Everything this weekend is about something new, between the museum, the whiskey and the band. We’re having fun with this. I’ll feel bad when we go home — it’s gonna be like, did that just happen?

A Metallica cover band is playing this same venue in a few months. What do you think about those bands?

Hammett: I think I jammed with a different one in San Francisco a few years ago, and that was fun because they weren’t expecting it! Pretty funny. It’s pretty cool, they’re out there spreading the word while we’re not (laughs).

While no member of Metallica is going to be out and about in the near future, the band recently launched a vinyl membership club and a weekly classic concert series online. Meanwhile, you can sit at home and pick up a bottle of Blackened here and peruse Hammett’s art at his “It’s Alive!” collection here.