It's a hot ticket this holiday season, and we got a preview

It’s tough to be a Harry Potter fan right now. As a pick-’em of controversies have besieged the children’s book franchise, many readers — including myself — have struggled to reconcile the franchise’s place as a beloved part of their childhood with its status as a platform for author J.K. Rowling. For many, engaging with any of the continuing Wizarding World properties is to actively support a transphobic bigot. Not to mention, it’s easy for companies to slap a bit of Potter branding on something and call it a day. For all these reasons, I approached the Harry Potter: A Forbidden Forest Experience with a hardy amount of skepticism.

Nestled in Morven Park in Leesburg, Virginia, the Forbidden Forest is presented as a “woodland trail experience” meant to recreate some of the best moments from the titular woods in Harry Potter, leveraging Morven Park’s extremely walkable trail. (Adult tickets are $56, while kids 5-15 are $45.) As visitors walk through the 60- to 90-minute show, they’ll find an array of lights projected into the trees and onto the trail, as well as all kinds of audio queues from the films in addition to little details like hooting owls or the rustling of leaves. Along the path, there are plenty of Instagram-ready installations that are bound to cover your feed for the next several months; the experience runs through early next year, and almost all November and December bookings are sold out. Move over, mall Santa, this may just be the hottest holiday ticket in town for families eager to get out of the house.

Some elements work better than others. The beginning is fairly tame but culminates in a moment where I bowed to Buckbeak the hippogriff (a horse-eagle hybrid) and the animatronic creature bowed back. A section inspired by the Death Eaters (followers of the evil wizard Voldemort) amounted to little more than some light-up markings on the trees. The best part is easily the bit where the woods are overtaken by a simulation of the Weasleys’ enchanted car flying and driving through the trees. Most sections, however, don’t amount to much more than (admittedly) cool lights, great sounds and then what’s blatantly a photo op at the end. 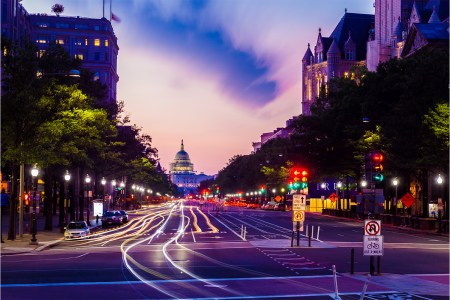 A Guide to DC’s Best Late-Night Eats, From Bartenders, Promoters and Nightlife Photographers

The pandemic forced many spots to close, but an after-midnight revival is now underway

My overall unease about the entire endeavor did melt away during the Patronus section. In Potter lore, a Patronus charm helps to ward away literally soul-sucking spirits but must be conjured while thinking of happy memories. Participants select a wand, stand on a wooden platform, and then point the wand at an LED panel and speak the phrase “Expecto Patronum” aloud to summon a creature on the screen. As I stood on the platform and aimed, I half-heartedly said the spell twice in a row — only to have the ethereal creature not appear. It wasn’t until I fully committed myself to it that, presumably at least, the friendly staff member controlling the final output allowed my randomized spirit animal to appear. It was that of a phoenix, a notable animal within the Potterverse, which soared around on the screen for a few seconds before disappearing. It was, without a doubt, the coolest moment I experienced and — dare I say it — the most magical, too.

Equally as impressive was the town square area, where patrons can snag a bite to eat and even grab a drink. While not the frozen sort you’d find on-site at the Universal theme parks, the Butterbeer tasted like a buttery caramel La Croix. Typical British food offerings were provided, including a standout sausage roll and a vanilla puff pastry that were decidedly a step above what I’d anticipated at an event like this. While alcohol wasn’t at the preview event I attended, those drinks will be provided moving forward. There’s also plenty of Forbidden Forest and Wizarding World merch for sale, naturally.

My current relationship with Harry Potter is complicated, and there wasn’t enough at the Forbidden Forest to make me forget about the awfulness of the last few years despite a few magical moments. If you’re a diehard fan, that might not be the case; several groups of supporters clad in Hogwarts robes appeared to have a blast as they walked through, and I suspect it’ll be a bigger hit when adults can come and have a drink or two on a weekend night. Families with kids will probably love it, too, especially during moments like the Patronus. But there wasn’t enough here for me to view it as a truly magical time.