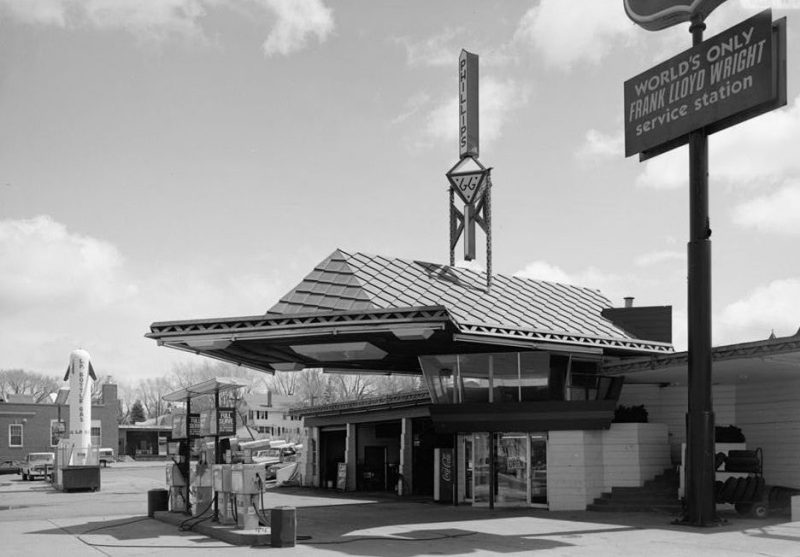 With a vision for the future, architect Frank Lloyd Wright wanted to build better cities using his innovative designs. His ultimate goal was to create a utopian metropolitan blueprint of sorts, prioritizing what he felt would be important in the decades to come. Wright’s plan was to enact this future-proof city design in Buffalo. While that mission never came to fruition, a small piece of his design found a home in another snowy land: Cloquet, Minnesota.

Wright designed a gas station for his utopian city in 1927, but the petrol pumping building wasn’t erected in its idyllic location until 30 years later—roughly a year before the architect died in 1959. The R.W. Lindholm Service Station, as the Cloquet pump is named, came about after Wright designed a home for a man in the petroleum business. 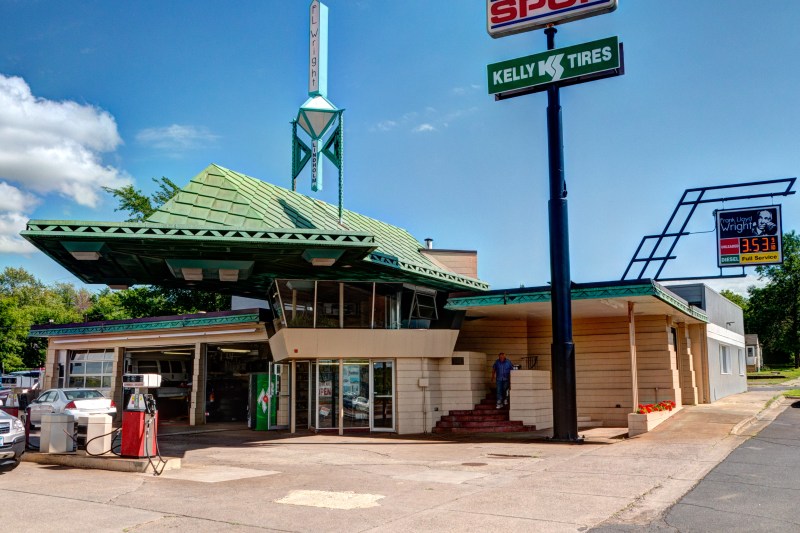 That man, R.W. Lindholm, was intrigued by Wright’s sprawling decentralized plan that blended suburbs and city, which the architect called Broadacre City. As a result of on Lindholm’s interest, Wright let him use a gas station design from the project. To this day, the R.W. Lindholm Service Station is the only building from Broadacre City that was ever erected.

The architect viewed cars as a symbol of American freedom and thought designing a forward-thinking gas station could be a way of spreading his Broadacre idea around the country. In his book Modern Architecture, Wright elaborates on the influence cars and gas stations would have on city planning. He believed the service station was “the future city in embryo,” which would “naturally grow into a neighborhood distribution center, meeting place, restaurant … or whatever else is needed.”

Unfortunately, Wright’s innovative plan for gas stations around the country never took off. “Certain elements, such as gas pumps hanging from an overhead canopy—intended to boost efficiency and save space—were prohibited by Cloquet fire bylaws (although, coincidentally, hanging pumps eventually became popular in Japan),” Daniel Fromson writes for The Atlantic. “The unorthodox station was also estimated by one trade publication to have cost two to three times as much as a standard design. Still, it remains to this day, open for business, the symbol of a vision of suburbia that never came to pass—or, in all likelihood, did, but just with a lot less futuristic style.”

For more information on Wright’s gas station designs, read the full story in The Atlantic here or watch the video below.