Stomping Grounds: Michael Chernow Takes Us on a Tour of His NYC

Note: in the months since we filmed this video in January, the restaurant industry in NYC – and nationwide – has been hit hard by the COVID-19 pandemic. We encourage you to support these and more local favorites by ordering takeout and delivery while dining rooms remain closed.

It’s no secret that artists are deeply influenced by the places they call home, relying on their surroundings as a wellspring of fresh ideas for how to present themselves to the world — both in their work and in the way they dress.

To explore that intersection, we’ve partnered with our pals at Neiman Marcus to showcase their new spring collection on a few dapper artists-of-the-moment in their cities of residence, spotlighting the locations that have been inspirational in their creative (and sartorial) journeys.

We’re calling it “Stomping Grounds” — consider it your blueprint not only to churching up your wardrobe this season, but also to exploring the haunts of some truly in-the-know gents next time you find yourself in the neighborhood.

“I am the quintessential New York City hustler,” says celebrated NYC restaurateur Michael Chernow. “Not in a ‘I’m going to hustle you out of your money’ way, but just … I’m not the smartest guy in the room.”

He’s underselling himself, of course, but he has a habit of doing that. In reality, having built two successful chains (Meatball Shop and Seamore’s) in arguably the most competitive restaurant market in the world, he’s got that rare golden touch that most folks in the hospitality game can only dream of.

For his next act, Chernow (who also counts fitness among his passions) will be launching a new restaurant brand dubbed Kreatures of Habit. While we’re not able to divulge too much here just yet, we do know that KoH will be (according to Chernow) a “culture and community-focused restaurant rooted in the world of wellness.” Stay tuned for more. 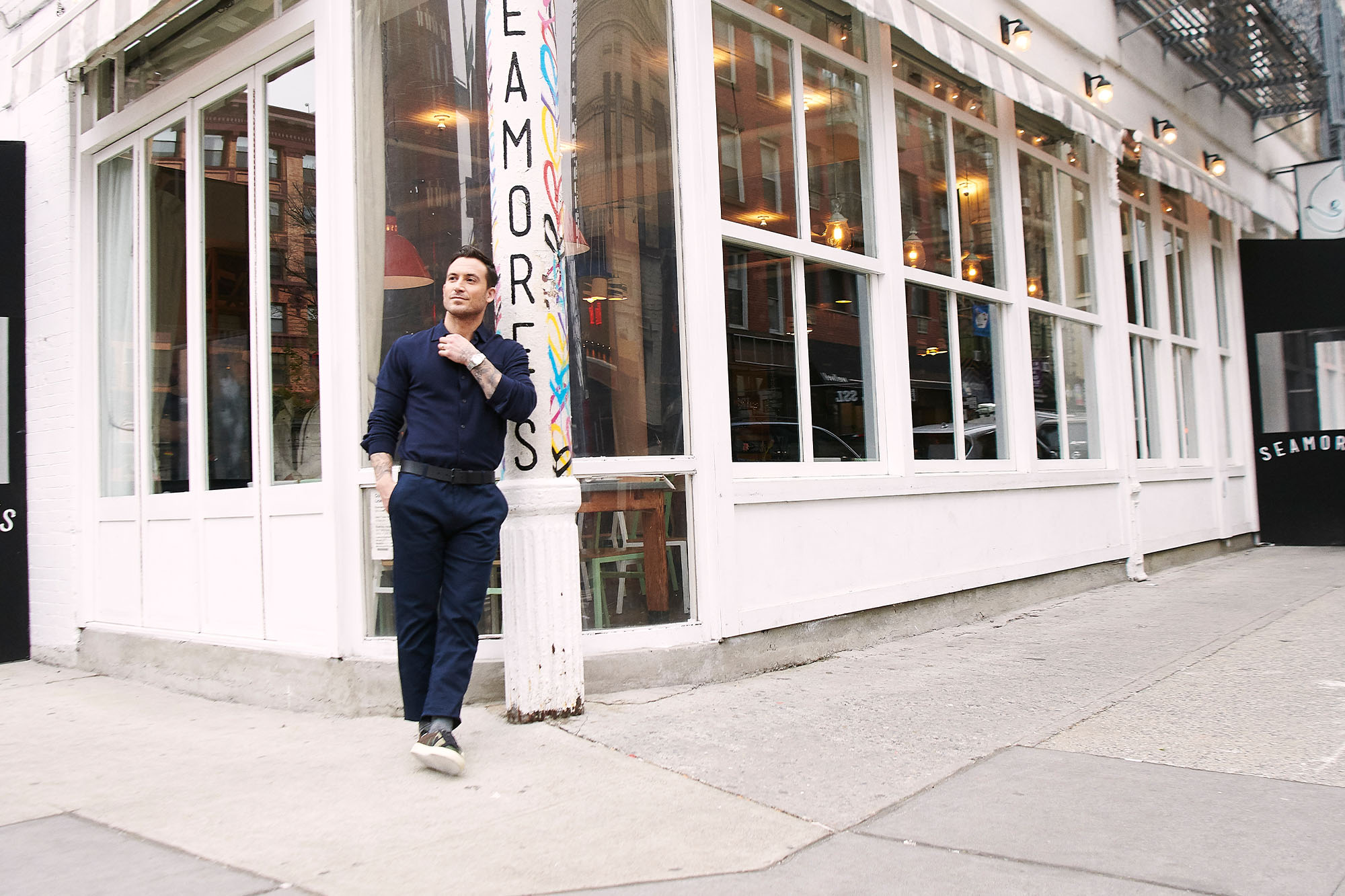 After selling his half of Meatball Shop back to co-founder and longtime friend Daniel Holzman, Chernow launched Seamore’s, an approachable seafood concept with killer food and an elevated, airy ambience. “I never opened a fancy restaurant,” says Chernow. “I love the approachable aesthetic turned up just a tiny bit.”

The idea of elevating the basics carries over to how Chernow dresses as well, as evidenced by his look from Vince. “For a look like this, it’s pretty simple, right?” he says. “It’s not a blue Oxford, it’s a blue knit, which sits on the body really nice. The little pops along the way are always fun, you can do those little pops with a pair of sneakers. That basic way of envisioning things with some swagger is sort of the way I see my style being.” 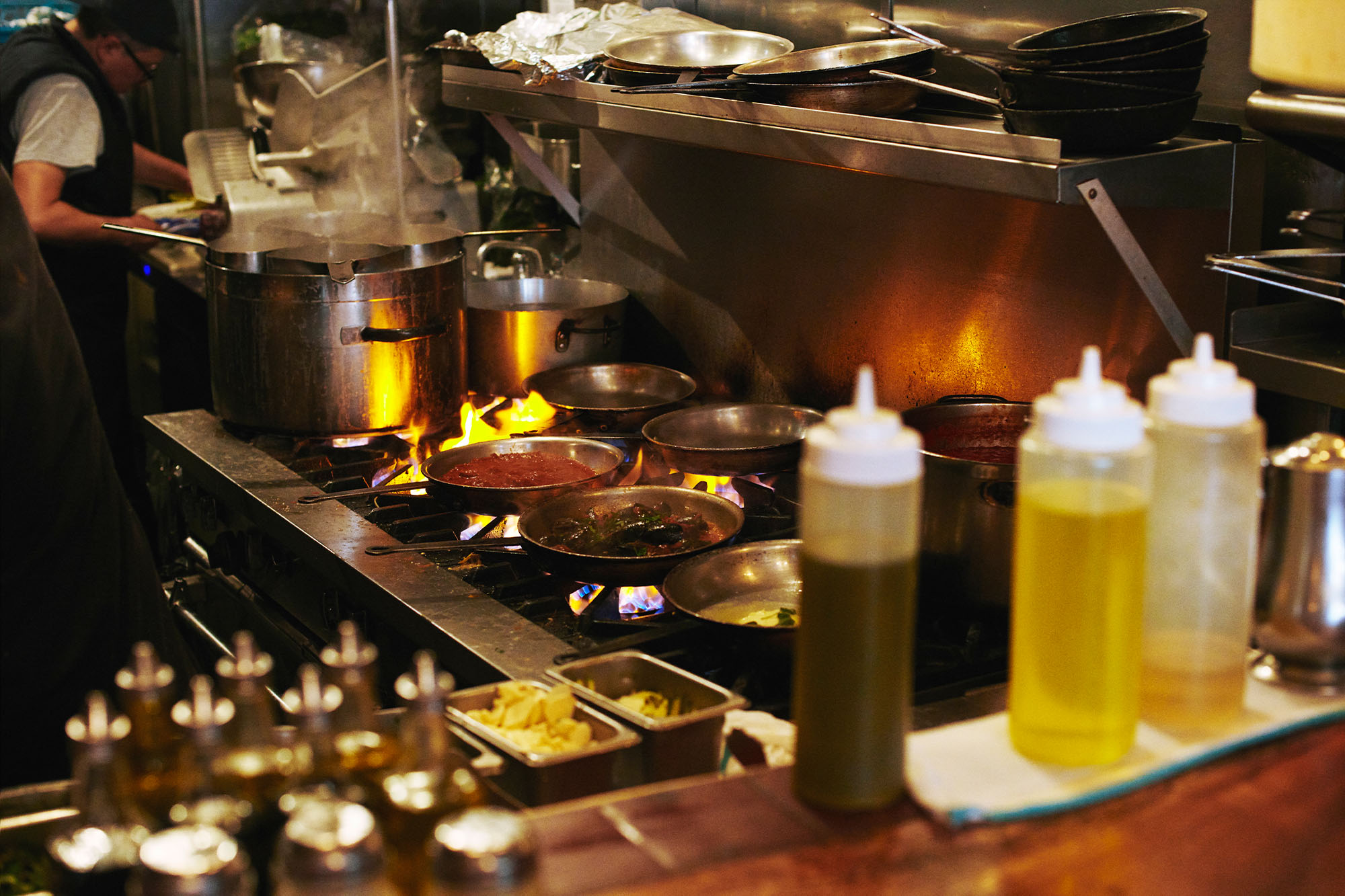 Chernow credits his time behind the bar at East Village institution Frank (beginning all the way back in 2001) as his formal indoctrination into the hospitality world, and almost 20 years later he still gushes over it. “The food is delicious, the energy and the environment is delicious. No one ever looked at a menu when they sat with me and I was behind the bar,” he says. “Rigatoni al Ragu, period, done. And the Tagliata Toscano, their skirt steak. They marinate it for 48 hours and cook it and finish it with some aged balsamic vinegar … just simple and really good. The devil is in the details in this business.”

Speaking of the details, Chernow also acknowledges the positive impact a good accessory or two — like these ones from David Yurman — can have on an ensemble. “I feel like jewelry is unisex and can add flavor to whatever you’re wearing,” he says. “You can always make it a little bit extra by throwing on a bracelet or necklace. I have plenty of pieces that have personal meaning to me.” 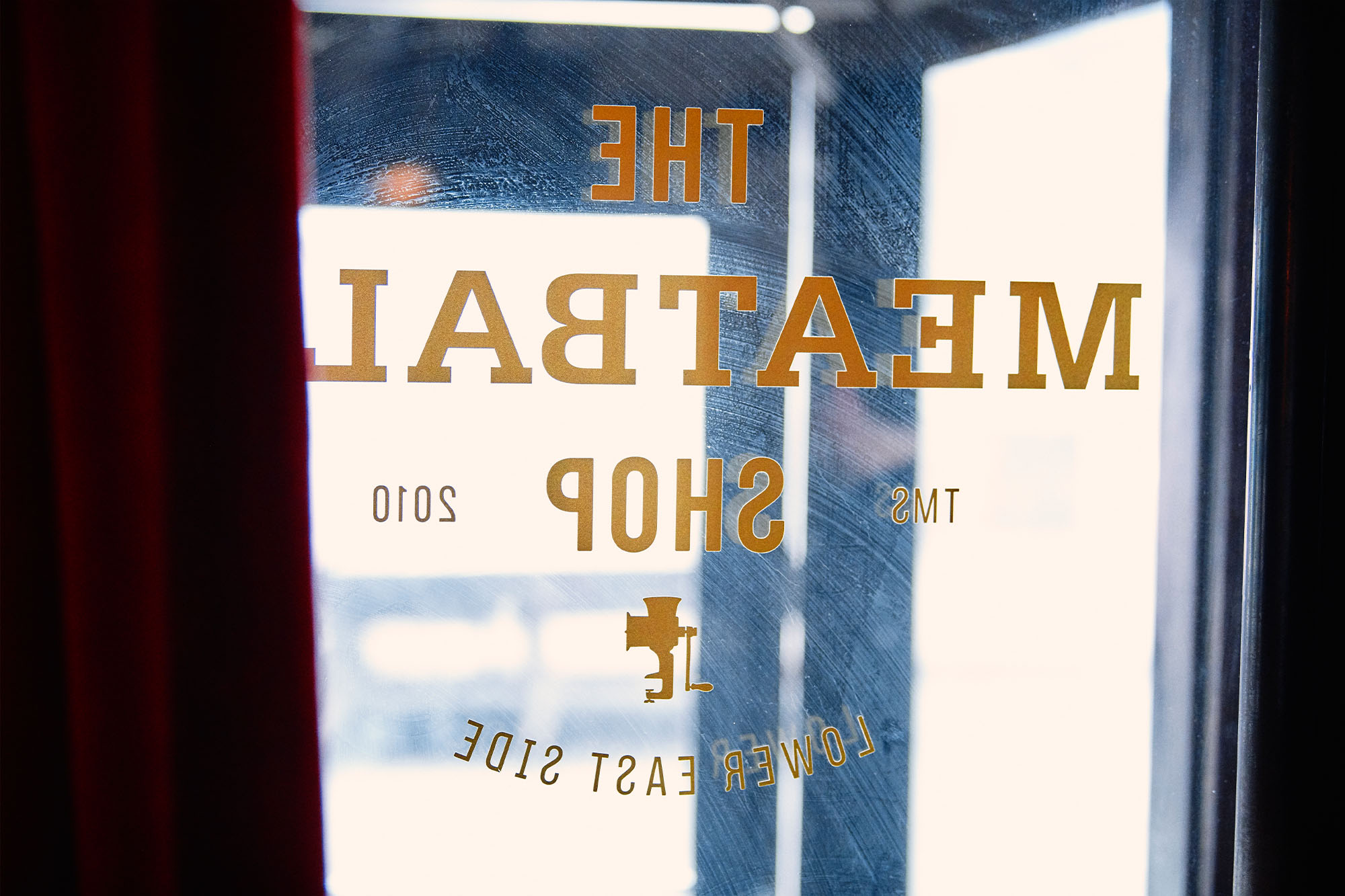 The Lower East Side is home to Chernow and Holzman’s first Meatball Shop location, which has been popping since the day it opened. In Chernow’s words, “We took the paper off [the windows] and there was a line of 250 people around the block. And that line did not end for years, straight up.”

Rightfully so, with grub as good as they’re churning out. “Someone’s coming into the Meatball Shop for the first time, the classic beef balls with tomato sauce is just about as good as it gets. It’s wholesome, it’s nostalgic, it’s what we opened the restaurant for,” says Chernow. “But if you’re really swinging for the bleachers, you can have the chicken meatballs with parmesan cream sauce over polenta — you’ll come back every Sunday for lunch.”

As for a getup befitting the guy behind a hip downtown NYC hotspot? Hard to go wrong with some Tom Ford. “Sunglasses in New York are just mandatory,” says Chernow. “Spring, summer, fall, winter. When the sun’s out, you put on a pair of sunglasses. And a great pair of jeans, because jeans are really, really hard to find that fit you specifically.” 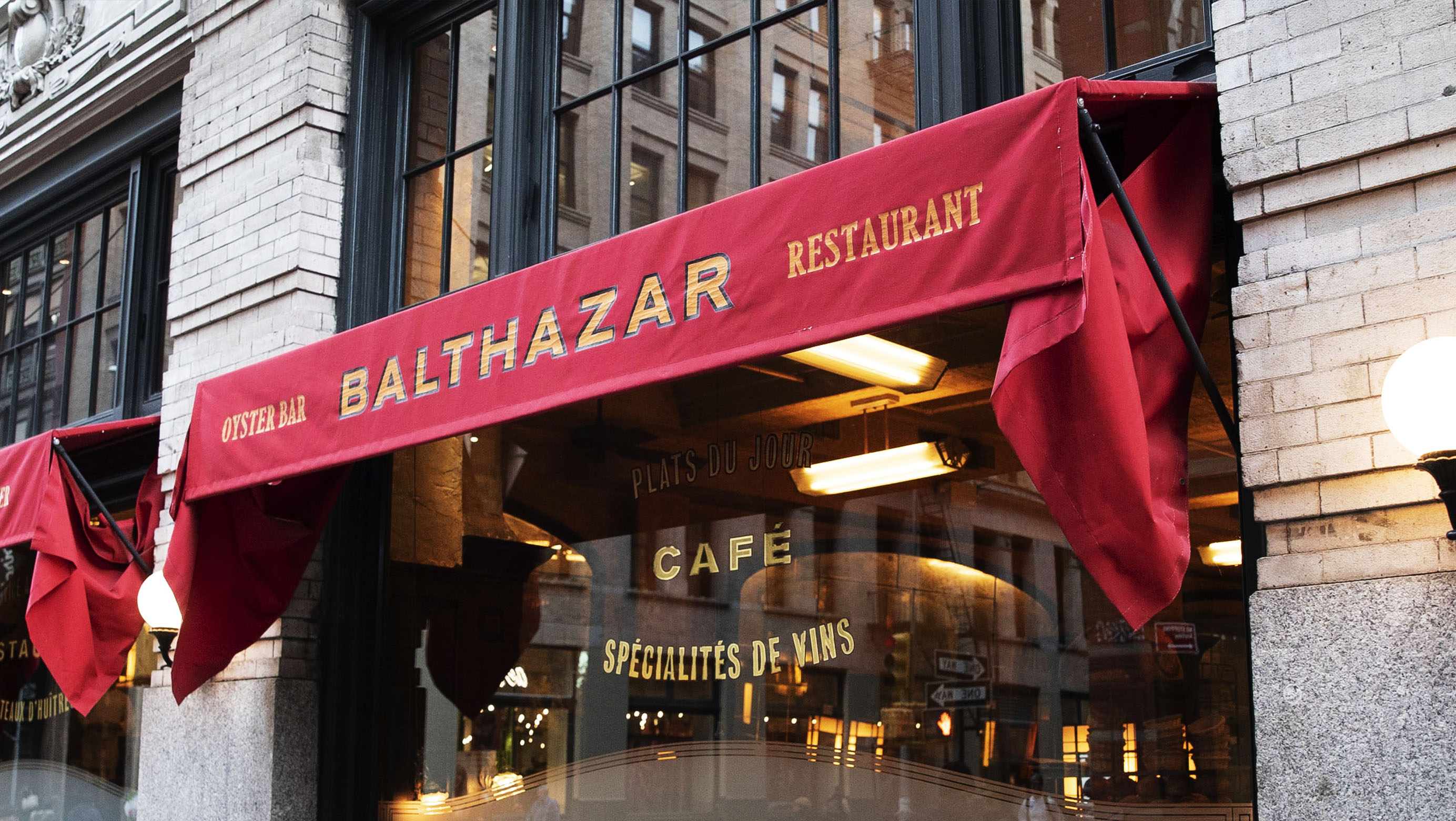 A Soho mainstay for over 20 years, Balthazar continues to draw crowds for not only the excellent French fare being served inside, but also as a gathering place to hang out and scope some of the city’s most stylish folks. “When I was a kid I used to love people-watching, and I still do,” says Chernow. “When my wife and I got together and started dating, we would meet at the benches outside of Balthazar for coffee and a pastry. To see what’s really happening in New York in terms of style, I don’t think there’s a better place to sit.”

If one is going to participate in the Soho people-watching scene, an outfit like this one from Theory will stay you in good standing. “New York City in the spring lends itself to layering, right?” says Chernow. “On date night I usually feel like dressing down with a knit polo — and then finishing it with a nice light jacket is pretty awesome.”

Where actor/director Matt Bomer spends his downtime in Los Angeles

Musician Trombone Shorty on his favorite places in New Orleans