The program’s shocking speed and versatility (from answering workday questions, to writing love songs, to even haggling cable bills) has been of endless fascination to social media since it dropped two weeks ago — if you head to the tool, it’s likely that you’ll be greeted with the message “ChatGPT is at capacity right now.”

I waited for a few minutes earlier today, and once I was finally able to use the system, I typed in: “Write me an essay about the meaning of the green light in The Great Gatsby.” ChatGPT instantaneously opined on the famous metaphor, drafting me a tidy, yet affecting 300-word riff, which concluded with this paragraph: 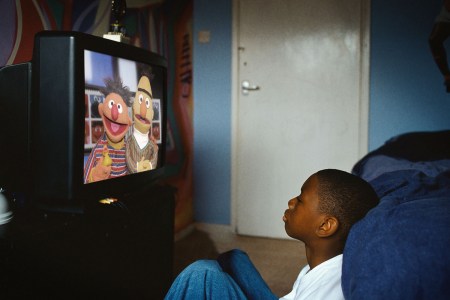 Raised by TV: How My Television Replaced School

My mother kept me home until I was 11, so television was my teacher

In a recent article for The Atlantic, California high-school teacher and author Daniel Herman wonders if the advent of mainstream artificial intelligence could spell doom for the English classroom. He writes: “ChatGPT [could be] the end of writing as a gatekeeper, a metric for intelligence, a teachable skill…I’ve been teaching English for 12 years, and I’m astounded by what ChatGPT can produce.”

While he’s long accepted that students might not be as inclined to nerd out over Moby-Dick as their teacher, he’s always been able to insist that writing matters. Punctuation, rhythm, flow — they’re all critical for developing one’s communication skills and producing a lifetime of essays and emails.

At least, that used to be the deal…until ChatGPT came around. “It’s no longer obvious to me that my teenagers actually will need to develop this basic skill,” Herman writes. There’s no need to claim that the dog ate your homework when you could just have the robot write it instead.

There is truly no limit to what the chatbot can comment on, and it invariably does so with clean, cogent copy, of the sort that is extremely rare in classrooms filled with 15-year-olds, where even the “best” writers often trend pompous and verbose.

In the professional world, the value of coherent writing is obvious. Consider the hiring process: an easy-to-read cover letter benefits both the applicant and the manager: it’s a way of presenting the facts (brief background, relevant experience, why you’d be a good fit), which might open a pathway to an interview, at which point it’s a human interaction.

On a day-to-day basis, ChatGPT can help employees organize their thoughts, and play with different drafts of an email or report (assuming they’re plugging in their own research/analyses to whatever sketch the chatbot presents). In high school English, though, writing is less about shipping out “deliverables” and more about learning and appreciating the form. What are writing’s rules? Why do they matter? How are these iconic authors playing with those rules (and potentially breaking them)? What can we learn about history, or civics, or the human condition, from our interrogation with writing? What can we learn about ourselves?

It’s not easy, and many Americans struggle to become proficient writers. According to the U.S. Department of Education, 130 million of us have low literacy skills.

ChatGPT is a remarkable, Gutenberg-level tool. It will help people express themselves in ways that once felt impossible. But everyone in the world turns into a B+ writer virtually overnight, what’s lost? Classrooms have long fielded criticisms for being too stagnant and predictable — assigning the same books, over and over again — but will we recognize them in 15 years?

To be sure, there will still be a stodgy professor or two handing out blue books, expecting students to procure quotes and weave together inter-textual arguments in real time. After a decade-plus of growing up on ChatGPT, it’s hard to imagine that kids will be prepared for such old-school exams.

But as the years go by — as tough as this is to write — perhaps the point of that sort of writing will be long lost, anyway. The green light reveals itself in the end, after all.