How Often Should You “Max Out” in the Gym?

It's tempting to load the bar up twice a week, but it isn't sustainable

Easy there, tiger. Maxing out might not be the best idea.
CSA Images
By Tanner Garrity @tannergarrity

When a player on a college football team is trying to set a new PR in the bench press or deadlift, it’s customary for dozens of his teammates to crowd around him in the gym, hooting and hollering as he gets into position.

In some cases, there’s even one of those jacked, whistle-happy assistant running back coaches there to officiate the whole thing. (Northwestern’s trainer went viral for this exact reason a few years back; he more or less hits his players with haymakers before they walk up to the bar, earning him the moniker of “absolute hype machine” on social media.)

The signaling in these videos is clear: lifting a lot is the point of lifting. After all, these guys are big dudes, and when they do successfully complete the rep, everyone parties in kind.

But “maxing out,” especially to the tune of a one-rep max, probably shouldn’t represent the primary goal in one’s strength training routine. And it definitely shouldn’t become a habit on the weight room floor. 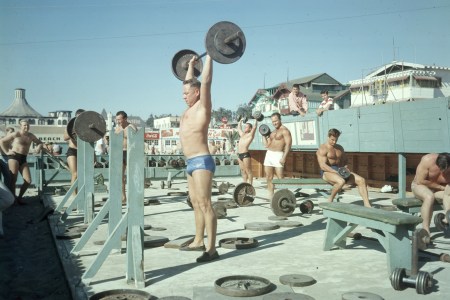 It’s Never Too Late to Start Lifting. Here’s How.

As intimidating as strength training may seem, it's relatively easy to get a steady regimen off the ground

Why? Because maxing out puts way too much strain on the body. Too often, the practice tends to:

None of those potentialities should be taken lightly — anytime the central nervous system is at risk, you need to be paying attention — but think about that last one. Getting stronger is the name of the game. Why endanger that process by going too hard too often? Same thing goes for endurance pursuits: overtraining will reap tangible consequences and diminishing returns.

At its worst, you can expect mental fatigue, persistent soreness, poor sleep, appetite or mood swings, and susceptibility to illness and injury. When athletes don’t give their bodies a break, those bodies start to break down. You’d think we’d all know better by now, being in the era of recovery fitness. But it’s not like the desire to perform has changed. Some hyper-motivated competitors find themselves willing to flout modern training sensibilities if it means proving to themselves (or others) that they’ve done enough to prepare for a game, match or race.

As for you, the civilian lifter who wants to keep track of how much weight you can handle in your compound lifts…fair enough. Just go for your max once in a very blue moon — once a quarter at most. Otherwise, as Men’s Health suggests, prioritize “sub-maximal lifting” (in which you shoot for a heavy weight you can put up three to five times), along with rep maxes, which involves lifting a relatively comfortable load 20 times or more.

Just remember, time under tension is king, so don’t race through those reps. As for whether you’d like to bring a cheering section to the gym with you…that’s entirely up to you.