Adam Vinatieri has a tough task ahead of him.
FanDuel
By Evan Bleier @itishowitis

Before retired star tight end Rob Gronkowski won a trio of Super Bowls in New England with the Patriots (XLIX, LI, LIII) there was another player with an “i” at the end of his name who collected a three-pack of championship rings (XXXVI, XXXVIII, XXXIX) alongside Tom Brady and Bill Belichick a decade earlier.

A South Dakota native who got this start in pro football playing in NFL Europe, three-time Pro Bowl kicker Adam Vinatieri went on to play 24 seasons in the NFL and retired as the league’s all-time leading scorer with 2,673 points. Perhaps even more impressive given the position he played on the gridiron, the 50-year-old finished his career — which also included a lengthy stint with the Indianapolis Colts and a fourth Super Bowl win — with 19 tackles. For those keeping score at home, that’s 19 more tackles than Gronkowski, who won his fourth Super Bowl with Tampa Bay after he left New England, recorded during his 11 seasons of pro football.

Gronk may not have any tackles, but he might be getting his first career field goal with some help from Vinatieri as part of FanDuel’s Super Bowl campaign. During a break in the action in the third quarter of Super Bowl LVII, Gronkowski will attempt a 25-yard field goal kick during a live commercial as part of the sports betting site’s “Kick of Destiny” promotion. If he’s able to make it, bettors who placed a wager on the game before kickoff will receive a bonus from FanDuel.

Though FanDuel won’t be able to accept bets on the kick itself, Vinatieri would be putting his money on Gronk to make the kick if he could.

“Obviously, he can catch touchdowns and run over the dudes, but kicking a ball isn’t the same. Catching touchdowns and kicking field goals are two different things,” Vinatieri tells InsideHook. “Everybody thinks they can do it and that it’s easy. It’s not a sure thing and it’s going to be difficult for him, but I think he can do it. If I was a betting man, I’d put my money on Gronk. I didn’t get to play with him, but I wish I did because he’s an awesome dude.”

He knows that because he’s been training Gronkowski to make his kick on February 12. And according to Vinatieri, who hadn’t spent much extended with Gronk prior to coaching him, it’s going pretty well.

“Rob’s hilarious and he is exactly what everybody thinks he is. You don’t even know when he’s being serious or joking around,” he says. “He’s a fun guy who likes to joke around…but he’s also a true professional. He wants to succeed. I know Rob’s felt pressure before, but this is a different type of pressure. He knows what’s on the line and he’s trying to help a bunch of people. He’s very, very serious about making this kick and he’s putting in the time to make sure he does, which I love. He’s a rock star.”

A rock star who has been training his body as well as his mind under Vinatieri’s tutelage. “Kicking is physical, but there’s a mental side too. As much fun as Rob is, he’s a guy who can clear his mind and really focus when everything’s on the line,” he says. “If you practice enough and get used to making the right contact enough times, you don’t have to think about it anymore. You can really clear your mind and let your body take over. You have to keep your body in shape and be strong enough, but I’d say the difference between good kickers and unemployed kickers is about 75% mental.” 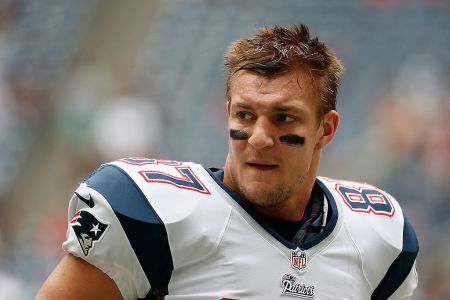 Rob Gronkowski Was Tired of Bill Belichick, Not Football

Teaching an athlete like Gronk to kick is somewhat fitting for Vinatieri, as he was known for being a multi-faceted football player as opposed to just a kicker after he famously chased down and tackled Dallas Cowboys returner Herschel Walker on a kickoff during his first season in New England.

“It was a pride thing to not let anybody score touchdowns on me. Walker was way faster and more athletic, but I didn’t want him to get to the end zone and I wasn’t going to let him,” he says. “How I caught him, I’m not sure. I was going to do everything I could to help win that game. But if you play long enough, you’re unfortunately going to have one taken back to the house on you. I had a few of them.”

Like Vinatieri, Gronkowski has had at least one long-shot touchdown run slip by him when he was on the field as a safety stand-in for the Patriots during the Miracle in Miami when the Dolphins were able to complete multiple lateral passes before getting the walk-off score against New England in December of 2018.

He may not have had a tackle on that play, but perhaps Gronkowski will get his field goal in February at the Super Bowl.