His new double-LP, "Oh My God," was mostly written on airplanes 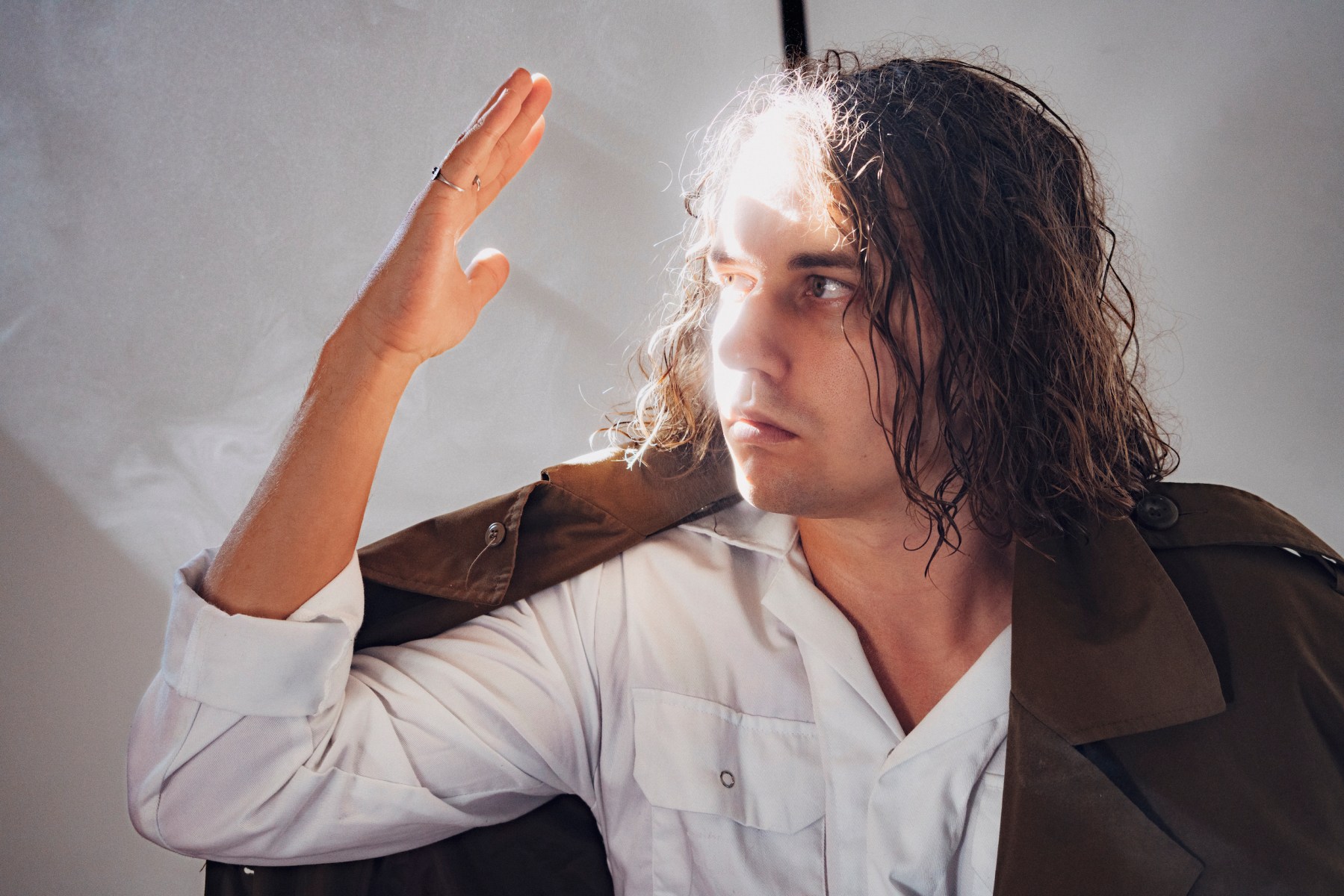 If you’ve ever been on an airplane, you’ve no doubt experienced the eerie silence that happens during takeoff as those onboard pay respect to the fact that they are about to be launched into the sky. Some fire off a quick prayer for a safe journey, some simply pause their conversations to brace themselves for being thrust towards the clouds, but everyone tends to keep quiet as they wait for the plane to level off and the flight attendants to start reading their spiel about complimentary beverages.

Kevin Morby is one of those people who turns to prayer.

It’s not something the indie musician does in his day-to-day life, but there’s something about the anxiety of flying that moves him to it. “It’s the only time I ever truly, fully pray,” he admits to InsideHook.

Perhaps it’s fitting then that much of his ambitious new record, Oh My God— a double LP he describes as a “non-religious religious album,” an exploration of the divinity of everyday life delivered via secular rock — was written on a plane.

Part of that is out of necessity: he’s been touring for the better part of a decade, first as a member of Woods and The Babies and later as a solo artist in support of his four previous albums.  A plane ride is often the only time he has to sit down and write. It’s time he has to himself, but cruising at 30,000 feet tends to bring something out of him creatively.

“You’re up there in the sky, and it’s so unnatural and my body’s just sort of always on alert, and it kind of raises my emotions,” he explains. “My emotions are heightened. For some reason, it just gives me this clarity and this sharp vision that I’m able to get a lot done up there.”

Though it was penned above the clouds, Oh My God is deeply rooted in earthly concerns, born out of Morby’s search for answers and comfort following the 2016 election, wildfires in California and a seemingly endless stream of wars, mass shootings and other bad news on an hourly basis. That year he wrote “Beautiful Strangers” — a single he dedicated to victims of gun violence, donating the proceeds from the track to Everytown For Gun Safety — and noticed an everyday expression becoming a theme.

“I’d noticed I was using that same phrase, ‘oh my god,’” he says. It resurfaces again on “OMG Rock N Roll,” an Oh My God highlight that recycles some “Beautiful Strangers” lyrics. (“If I die too young, if the wolf he comes/Fee fi fo fum”)

There’s no doubt that Oh My God is a Kevin Morby record — effortlessly cool and full of rich narratives and dark wit, delivered in a manner that has earned him comparisons to Bob Dylan and Lou Reed — but it’s also a sonic departure. (“We don’t always need to have guitar, and especially for a record like this given its subject matter,” he says.) So while “Beautiful Strangers” inspired Oh My God, it had to morph into “OMG Rock N Roll” to find its place on the album.

“Because I wrote ‘Beautiful Strangers’ and that was sort of the beginning of the album, I thought it important to release that song — I thought it was sort of time-sensitive because it had all these current events in it, so I kind of wanted to get it out as quick as possible for charity, and I thought it would make the biggest splash around that time,” Morby says. “And so it’s a weird thing where like while it’s the first song that started this record, it had already been released a couple of years ago, so I didn’t want to put it on the album. So this is sort of like a fun way to give it a home on the record.”

While it’s inspired by very specific events and the political climate, Oh My God never explicitly references them, save for a few brief allusions (“OMG Rock N Roll” mentions “26, 49, 58 dead,” the number of casualties from the shootings at a church in Sutherland Springs, Texas, the Pulse nightclub in Orlando and Las Vegas’s Route 91 Harvest music festival, respectively).

“I wanted the record to be impactful no matter what year or era you listen to it in,” Morby says. “I didn’t want to anchor it to any sort of time or place just because I think the political turmoil right now is really exhausting, and I didn’t want the record to bear that weight. I wanted it to be a record that you listen to and maybe feel more hopeful and not make the room of the album stuffy with politics, basically.”

In fact, Oh My God doesn’t feel stuffy with anything, with Morby and producer Sam Cohen, who also produced Morby’s Singing Saw album, opting to strip back the musician’s signature sound, swapping guitar for organ and giving the album more of a church feel.

“We wanted to make something that would be fitting inside of a cathedral,” he says. “Every other album [of mine] is largely guitar-based, so we were kind of stripping it away for that sort of cathedral feel, but also we wanted to strip songs down for parts and not make the same record over and over again. Just bring the songs down to their part and have it be mainly about the vocals.”

Allowing those vocals room to breathe is what makes Oh My God so effective, as Morby’s lyrics bring the album’s concept front-and-center. On “Piss River,” he’s scared and angry. On “Hail Mary,” he plays off of the way the titular prayer has worked its way into our lexicon, singing “Hail Mary, oh go long” and connecting the holy to the mundane. On other tracks like “Congratulations,” he celebrates the fact that we’re all here, alive, doing the best we can. Even in the album’s darkest moments, Morby maintains a sense of hope — something he wants to pass on to listeners who may be struggling.

“I think the biggest reward is when someone tells you that you helped them through a time,” he says. “There’s a Kurt Vonnegut quote I’ve always really loved, which is, I’m paraphrasing here, but it’s something along the lines of ‘we’re all here to help each other through this thing, whatever it is.’ I really relate to that a lot, and I really think just putting something into the universe that can help someone else, that’s the biggest reward.”

And so, as Oh My God prepares for landing, it ends on an optimistic note, with Morby noting that “perhaps we’ll meet again, my friend, above the weather” as he descends back to earth on “O Behold.”

He likes to think of the album as a journey that begins on an airplane, he explains, with the twinkling and hammering of the piano on opener “Oh My God” representing his nerves.”’O Behold’ felt like a song where the plane is going down and I don’t know if it’s crashing or it’s landing, but it’s coming below those clouds and it’s coming back down to earth after the rest of the album took place in this dream above the clouds,” he says

“And I don’t know, there’s just something to that song where it feels like—there’s that line in it that’s like, ‘if the plane’s on fire, I love you.’ It’s just sort of a record that’s like ‘I’ve been safe up here above the clouds and I’ve been safe from humanity and storms and everything that happens on the ground, but I’m headed back to the ground and I’m not sure what’s gonna happen, but just know I have hope in my heart.’”