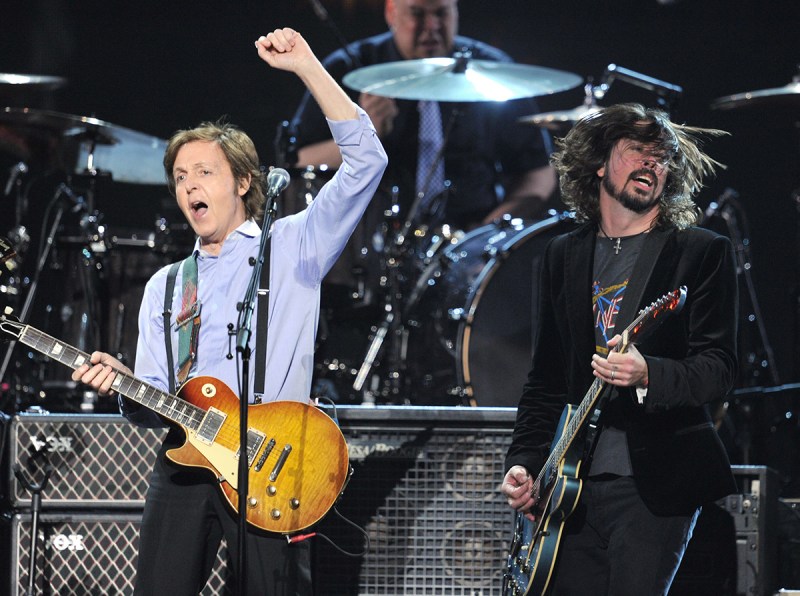 OK. So you’ve gone out and bought that Gibson SG (a la AC/DC’s Angus Young). You’ve got the amplification, a guitar cable to plug in your axe, and a mic to sing into. Now what?

Some people get that far and give up; their guitar, amp, and mic quickly collect dust in their basement or garage. Buying equipment is the easy part. But the learning process? First, you have to learn all the major and minor scales. Then the pentatonic ones. Afterwards, you need to know how to form your hand (whether you’re a righty or lefty) into the proper chords. And finally, of course, there are all those popular songs to learn. It’s a daunting task, to say the least. Or is it?

We’re here to tell you today that you can skip the $25/hr teacher at the local guitar shop, if you want to. If you put your mind to it, you can learn how to rock in no time—and someday, possibly be playing to an arena full of screaming fans.

How do we know this? Because Dave Grohl, drummer for Nirvana and guitarist/lead singer for the Foo Fighters, says so. Of drumming, Grohl tells The Off Camera Show that he “learned how to do it on his bed by listening … to Rush records and punk rock,” after taking just one lesson that went nowhere. (The teacher told him he was holding his sticks incorrectly, and he bolted.) The same went for guitar: “I don’t know what any of the chords really are. The way I look at the guitar is like a drum set; I look at the lower strings like they’re kicks and snares and [the upper strings] like they’re cymbals,” explains Grohl.

We’d be remiss to mention that other famous rockers share a similar sentiment to Grohl. In fact, there’s a laundry list of artists who have been largely self-taught. These include Prince, Noel Gallagher (of Oasis), David Gilmour (of Pink Floyd), Eminem, Keith Moon (The Who), David Bowie, Frank Zappa, Eric Clapton, Jimi Hendrix, and Grohl’s bandmate Kurt Cobain. (If you’ve been reading RealClearLife, you’ll have already learned how to play the bass from Sir Paul McCartney.)

The way Grohl sums up his self-taught skills to the folks at Off Camera is brilliant: If you go to IKEA and buy a chair, you don’t really want to read the directions to figure out how to put it together; you just want to do it and be proud of the product in front of you.

In other words, be your own teacher. Figure out the basic chords, have the cojones to tune your guitar in a different way than everybody else does, and figure out how to form your hands on the guitar’s neck in a way that suits you. And maybe, just maybe, you’ll find a hidden Hendrix or Clapton living inside your fingers.

For additional proof of Grohl’s ability to forge his own path, watch video of him below not letting a broken foot stop him from touring as he rocks out from his “throne.”