For the last two decades, Cliff Lede has been leaving his mark on Napa Valley — not just with excellent wine, but by bringing a sense of rock ‘n’ roll cool to this sometimes fussy wine region.

Influenced by his mother’s early forays into home winemaking, Lede’s interest in wine began early and grew stronger over time. Taking over the family construction business founded by his father, Cliff and his brother grew the company, now called Ledcor Construction, into one of the biggest in the world. And after many years working in that world, Lede’s next goal was to follow his own dream and get into the wine business. An avid Bordeaux collector, he initially considered purchasing land in France, but a trip to Napa on business changed his mind; Lede ended up investing in 60 acres in the coveted Stags Leap District of Napa Valley way back in 2002.

Since then, he’s become the proprietor not just of Cliff Lede Vineyards, but also Fel Wines — which focuses on wines from the Anderson Valley, where Lede owns the highly regarded Savoy vineyard — and Poetry Inn, an intimate luxury hotel on the cliffside overlooking the Stags Leap District. While the hotel and FEL (named for his mother, Florence Elsie Lede) each have their own fascinating backstory, it’s the original Cliff Lede tasting room and vineyard that might offer the most surprises for visitors. Guests who come to Napa for a tasting experience can book a standard tasting indoors, an experience on the gorgeous veranda or even in a VIP outdoor lounge area, or they can skip those typical settings and head Backstage, where rotating art collections by the rock and roll community are displayed.

If the classic rock-leaning playlist didn’t already tip you off, then this secluded lounge teeming with contemporary visual art, signed guitars and all sorts of musical memorabilia will seal the deal — as much as he is a lover and collector of wine, Lede is a rock fanatic. And particularly in the Backstage lounge, he’s merged the two into one incredible fusion. “Reception from Napa has been surprisingly supportive, even if the vibe is a bit different than some of the more traditional tasting rooms,” Lede tells InsideHook. “While it may catch some people off-guard to begin with — especially if they just came from a more traditional tasting — they eventually hear the story and connect with it. Like the wines of Napa Valley, classic rock music is timeless. Both are bold, inspiring and beautiful in many ways.”

His taste in visual art, which encompasses everything from sculpture to paintings to photography, is quite compelling, too, though not as uncommon a sight in a Napa tasting room as, say, an autographed electric guitar from a band like Fleetwood Mac. By letting visitors engage with some of his own most prized collectibles, Lede is also making a connection between wine and music that not everyone might’ve made. He cites his taste in rock as going all the way back to 1964, when he saw the Beatles playing on Ed Sullivan — “on black and white TV if you can believe” — and hasn’t looked back since. “It was like nothing I’d ever experienced before, and I instantly became a fan,” he says. “In the following years, I developed a love for rock music and bands like Led Zeppelin, The Rolling Stones and Pink Floyd.” 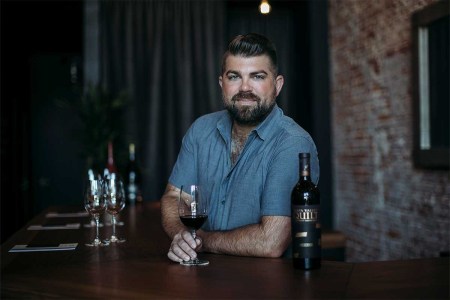 By the time he opened his own tasting room, Lede’s lifelong rock music fandom was well-established. And playing the same easy-listening tunes that other wineries tend to just didn’t fit his vision. “My initial goal was to find a property that would produce the fruit needed to create exceptional wine; that was my focus,” Lede says. “The music came in later when we got to the point of opening our new tasting room and I couldn’t bring myself to play classical or jazz music in the Cliff Lede tasting room. I wanted our atmosphere to reflect the personality of the name on the bottle. It had to be an authentic representation of who I am. So, I decided to play classic rock and we found that people loved it. It put them at ease, and we found it took the pretentiousness out of the tasting experience.”

That wasn’t the only place Lede brought his love for music into the winery, either. After taking over the vineyard, Lede and his crew began the arduous process of vineyard redevelopment. Generally, vineyard blocks are named in an alphanumeric format (A1, A2, A3, etc.), but such a boring naming convention didn’t resonate with Lede, who “figured it would be a lot easier to remember which block was which if they were named after something I loved.” Turning it into a game that involved the whole team, he solicited a top-five recommendation of rock songs from his entire staff and developed a master list of submissions. Thus began the process of naming the “rock blocks,” or certain sections of the vineyard which now have names like “Roundabout Midnight,” word to Miles Davis.

“‘Bohemian Rhapsody,’ ‘Whole Lotta Love,’ ‘Sympathy For The Devil,’ and ‘Light My Fire’ were some of the early top picks, along with Pink Floyd’s ‘Dark Side Of The Moon’ and The Beatles Sgt. Pepper’s album,” Lede says. “A couple years later, we released our first rock block series Cabernet Sauvignon, which is basically a barrel selection of some of our most opulent lots from the vintage. It is essentially a ‘mash up’ for wine. Each year, we name the wine after two of the primary blocks in the blend, creating wines with names like ‘Stardust Heaven’ (‘Ziggy Stardust’ and ‘Stairway To Heaven’) and ‘Magic Nights’ (‘Magic Bus’ and ‘Nights In White Satin’).” And what does it say on the site listing that extolls the virtues of these special, rock-focused blends? What else: “These go to 11.”

As the rockers Lede admires slowly began to hear about a Napa winemaker with a penchant for the classics, several of them have stopped by the tasting room, even going on to become family friends and play shows for local events. An annual party to celebrate the release of the rock blocks always involves live music along with food pairings for the wine, and you never quite know who will show up for the event. Earlier this year, Jon Anderson of YES dropped by the party for a surprise performance after meeting Lede through mutual friends. “Jon was playing a show here in Napa, so I went and was totally blown away with how great he sounds all these years later,” Lede says. “We connected after the show and the rest is history.”

Through his work, Lede has met stars like The Edge, Dave Grohl and Alice Cooper, and now as his son Jason, a talented DJ and hip-hop aficionado, gets more involved with running the business as director of communications for Lede Family Wines, Cliff has to take a hard look at how hip-hop might be part of the vineyard’s future. After Jason pitched naming a block in honor of a Beastie Boys hit, Cliff was initially reticent, as rap music was never part of his own passion. “We’re music lovers in our family and like most, our kids tend to like different music from their parents,” he says. “While I was initially against the idea, I eventually warmed up to it when Jason presented the facts to me: They’re in the rock hall of fame and have had a multi-generational career. We’re a multi-generational winery, so we now have the Beastie Boys ‘Intergalactic’ block in our vineyard. I think it makes sense, as a lot of hip-hop was inspired by rock music, and the genres can coexist. ‘Walk This Way’ by Aerosmith and RUN-DMC are good examples of that.”

For now, the beauty of the Backstage tasting room is the way it brings people together and potentially opens up the door for people who might not have been drawn to the world of wine to get involved. And for Lede, it lets him combine three of his greatest loves into one succinct experience — and as something he can continue to share with the world. “Backstage brings together three of my passions: wine, art and music,” he says. “What was originally just an art gallery has morphed into a luxurious tasting lounge featuring our best wines, a curated playlist and artwork created by former rock stars, songwriters and other icons. We still play the classics to this day, and it is interesting to see that the music still resonates with the younger generation. My granddaughter loves to play ‘Stairway To Heaven’ on the piano!”