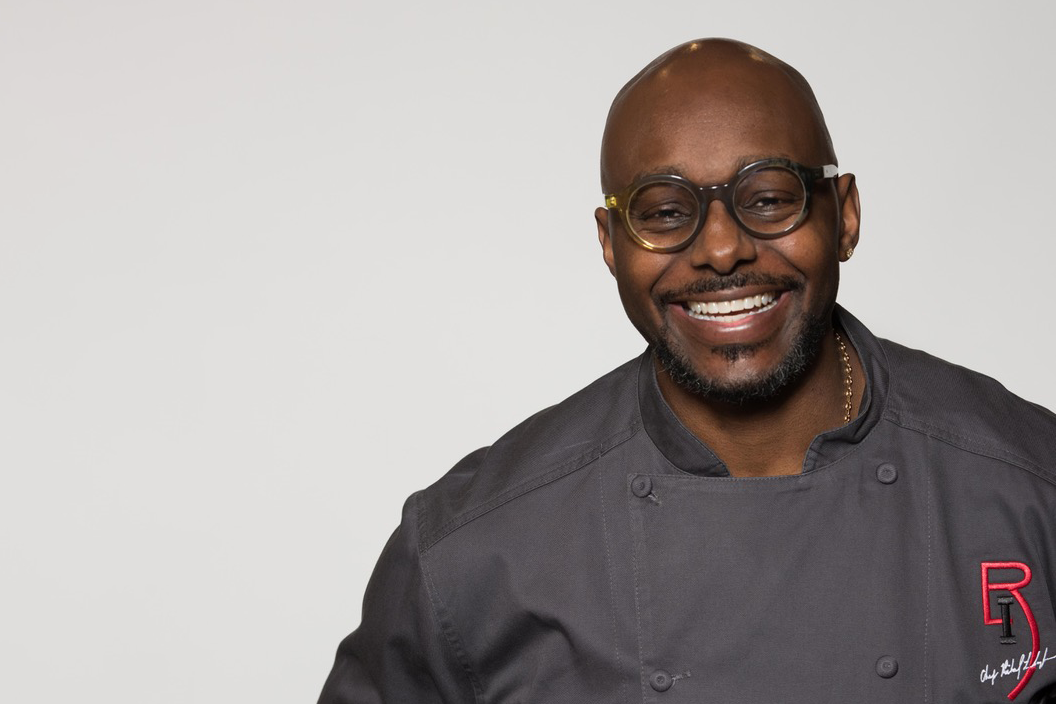 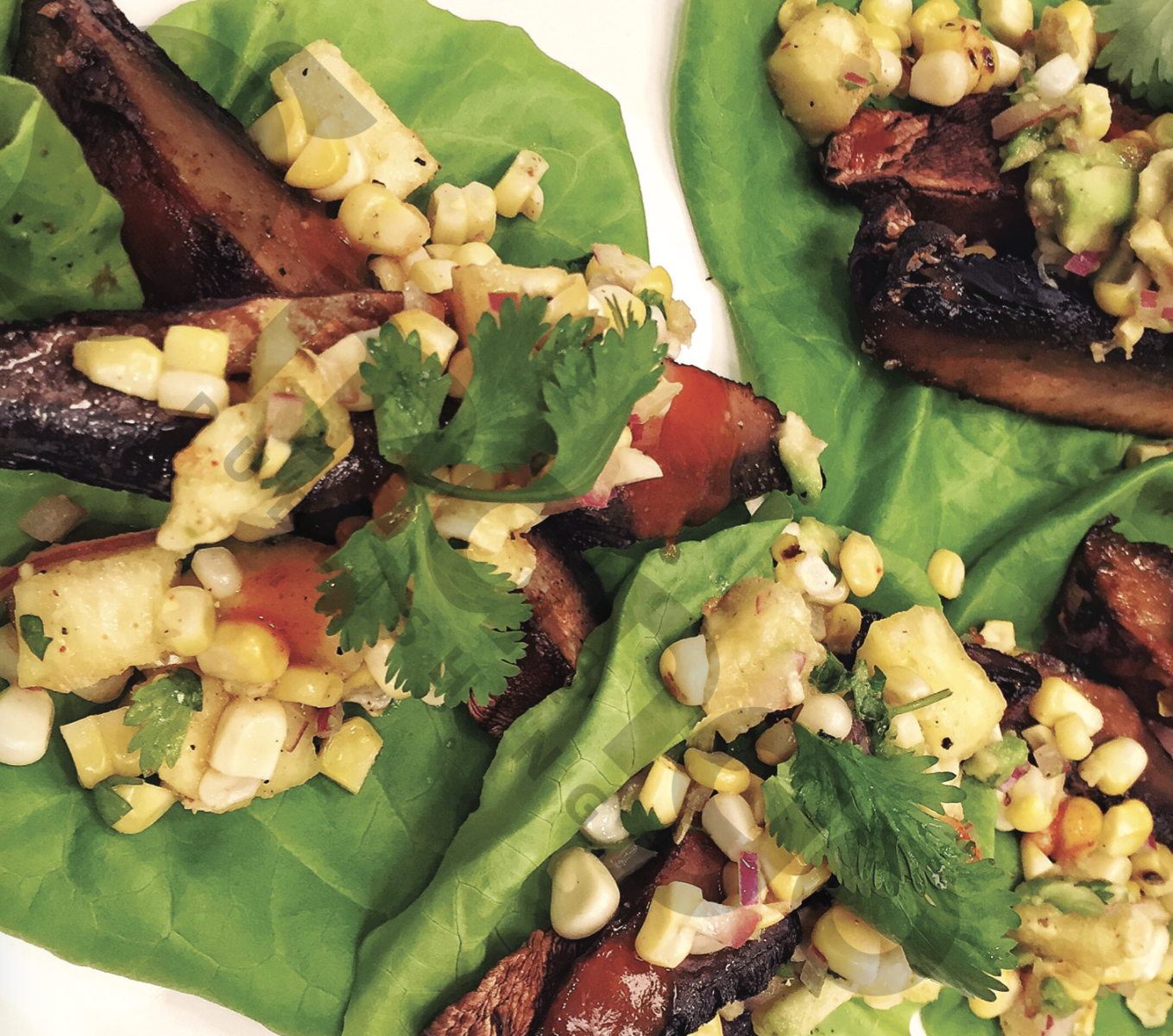 Portobello Lettuce Tacos With Pineapple Corn Relish
“If you’re vegan, this is a great way to have tacos and still be able to adhere to your vegan lifestyle as well. Very flavorful,” Ingraham says. “The portobello mushrooms, once they’re roasted off, taste exactly like meat … And then you come back with the relish. You have the sweetness of the pineapple and you have a little char off the corn. It’s nice and refreshing. And then you have butter lettuce instead of taco shells so you don’t feel like you’re totally going against your diet if you’re trying to go carb-less or whatever. Butter lettuce is nice and tender and it holds up well too. So it’s a perfect dish for somebody trying to eat light but still trying to do a tacos for the Super Bowl.” 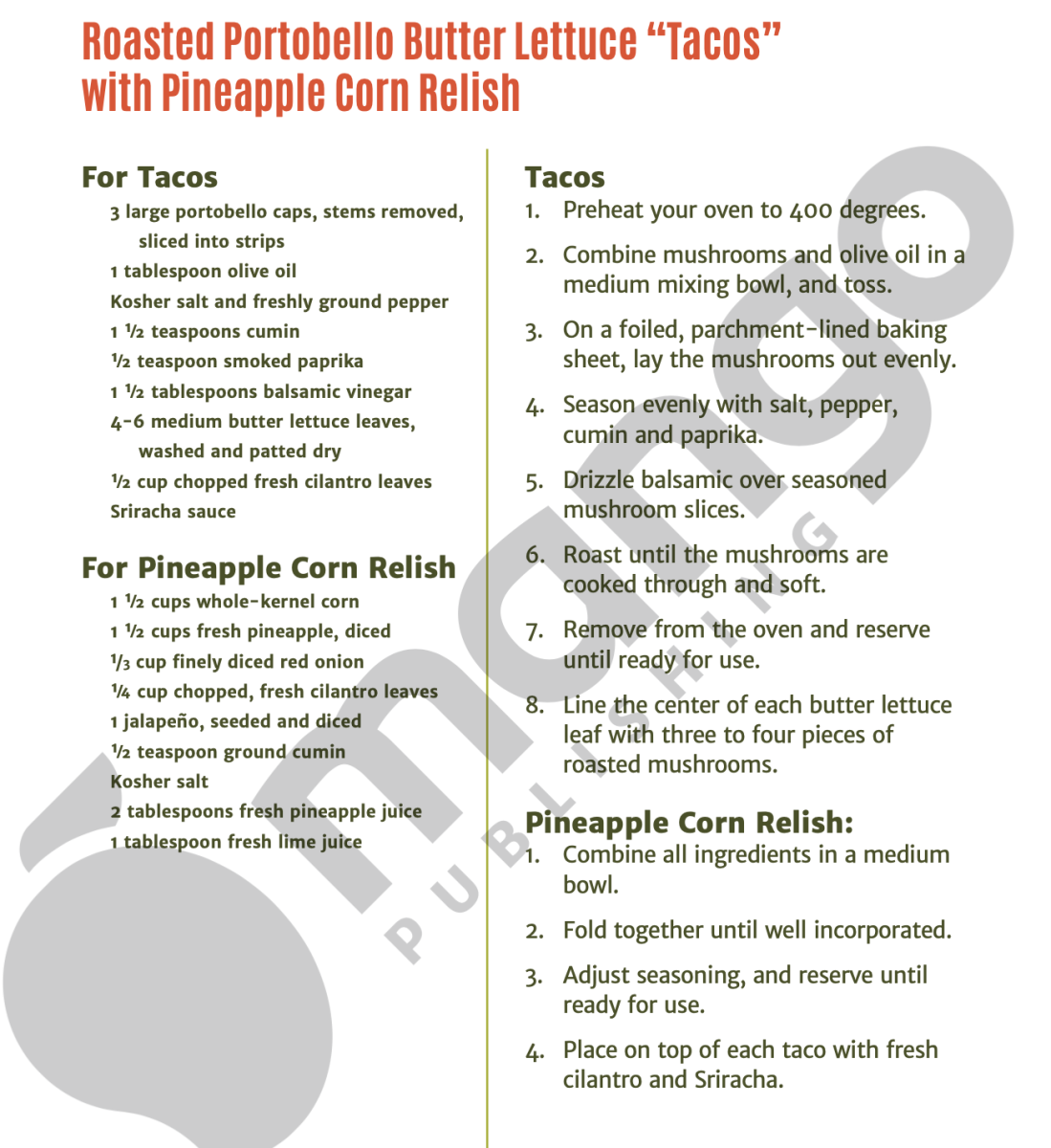 “You can always add a little taco sauce to it if you want,”  Ingraham says. “Cooking is like that. The recipe is only a roadmap. And on the road, as you know, you stop and you pick up a little trinket here, a little trinket there, but you still get to your destination which is eating good. That’s how I make chili.” Caribbean Salmon Croquettes
“My mother makes these and my father and I would fight over them. They’re better once they have cooled off, the flavors really come together,” Ingraham says. “My mother normally makes them with just onions and some garlic and a little celery seasoning or whatever. But of course, I want to take it to another level, so I went a little more Caribbean with it and added cilantro, a little Creole seasoning and then smoked paprika with dijon mustard. And I even have a little asiago cheese as well. They’re very flavorful, nice and crispy on the outside … Then we add cilantro aioli on the top of them. It’s something quick and it’s something that definitely would not be expected at a Super Bowl party.” 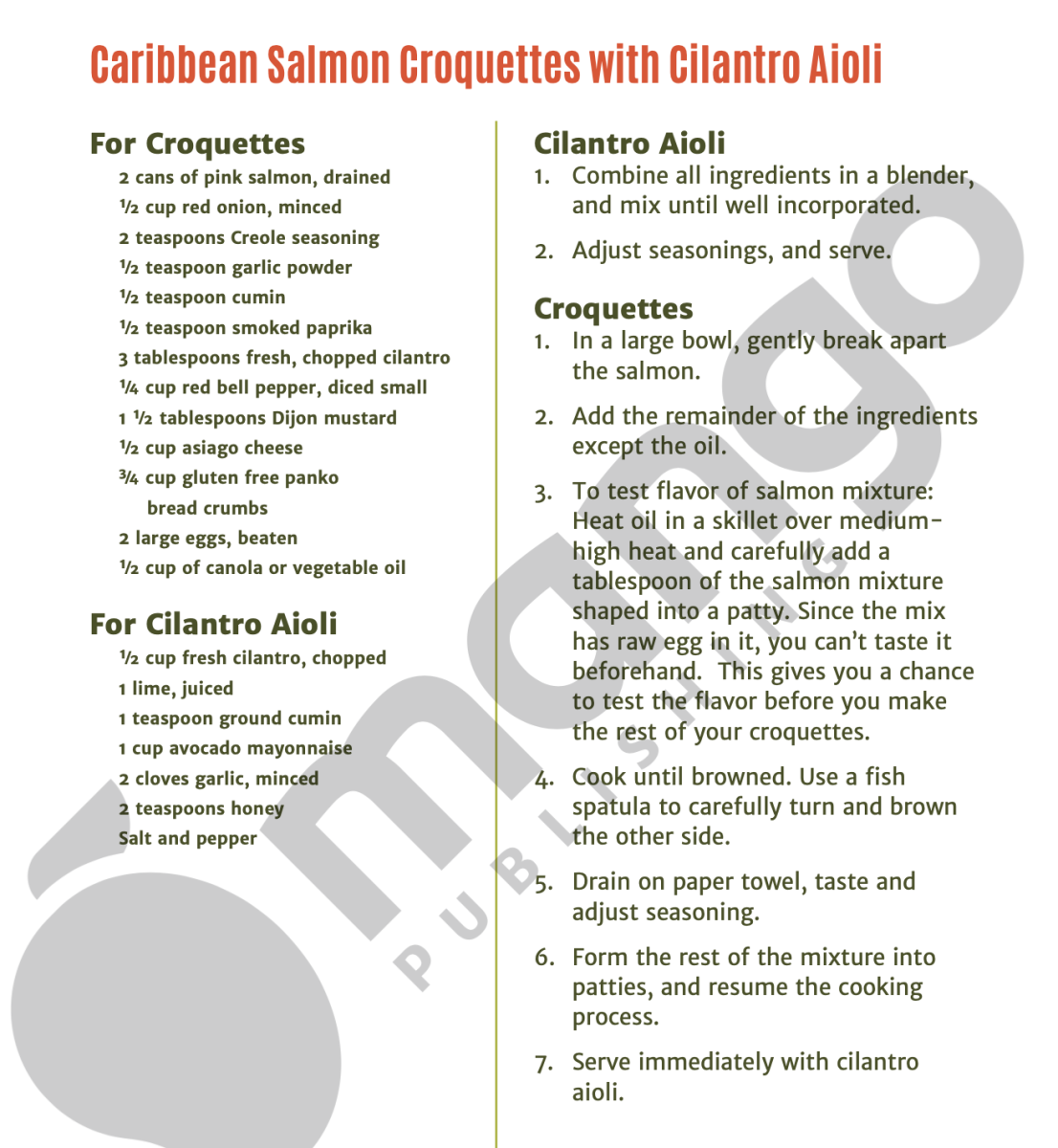 “These are somewhat of a show stopper, I would think,” Ingraham says. “You can do these this way in patty form or you could make them into balls as well and still pan fry them. Or, if you really want to get funky with it, you can put them in a deep fryer. Get them nice and crispy, because once you do that, you’ve got a different type of meatball. It’s all in the presentation.” 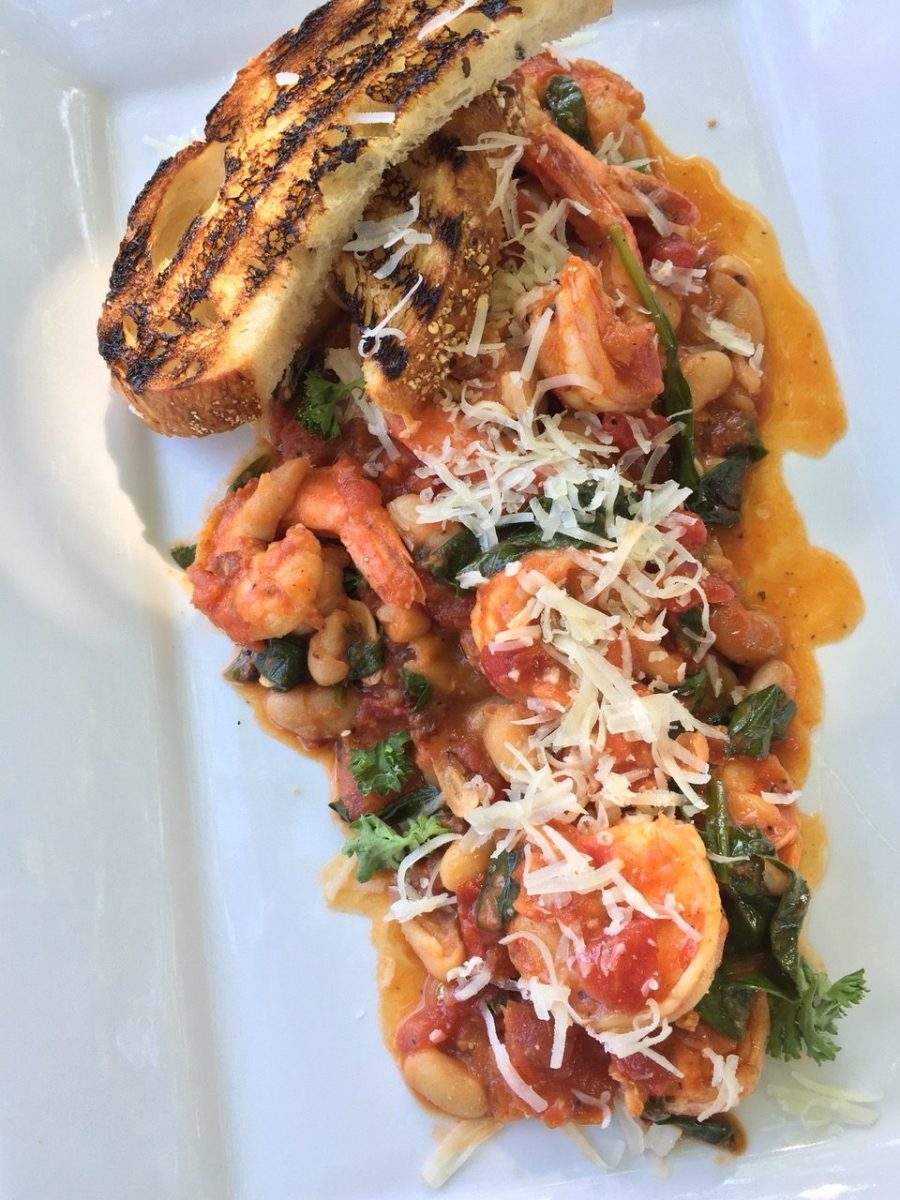 Garlic Shrimp in White Bean Ragu
“This dish came along because I wanted to just do something different,” Ingraham says. “I wanted to do some type of ragu. Dwyane is into this dish as well. He was never been really big on seafood, but I wanted him to try the shrimp. But I wanted to do it with the beans to provide a little more protein for him. Then, with the addition of the kale in there, that was my way of getting him to eat some vegetables.” 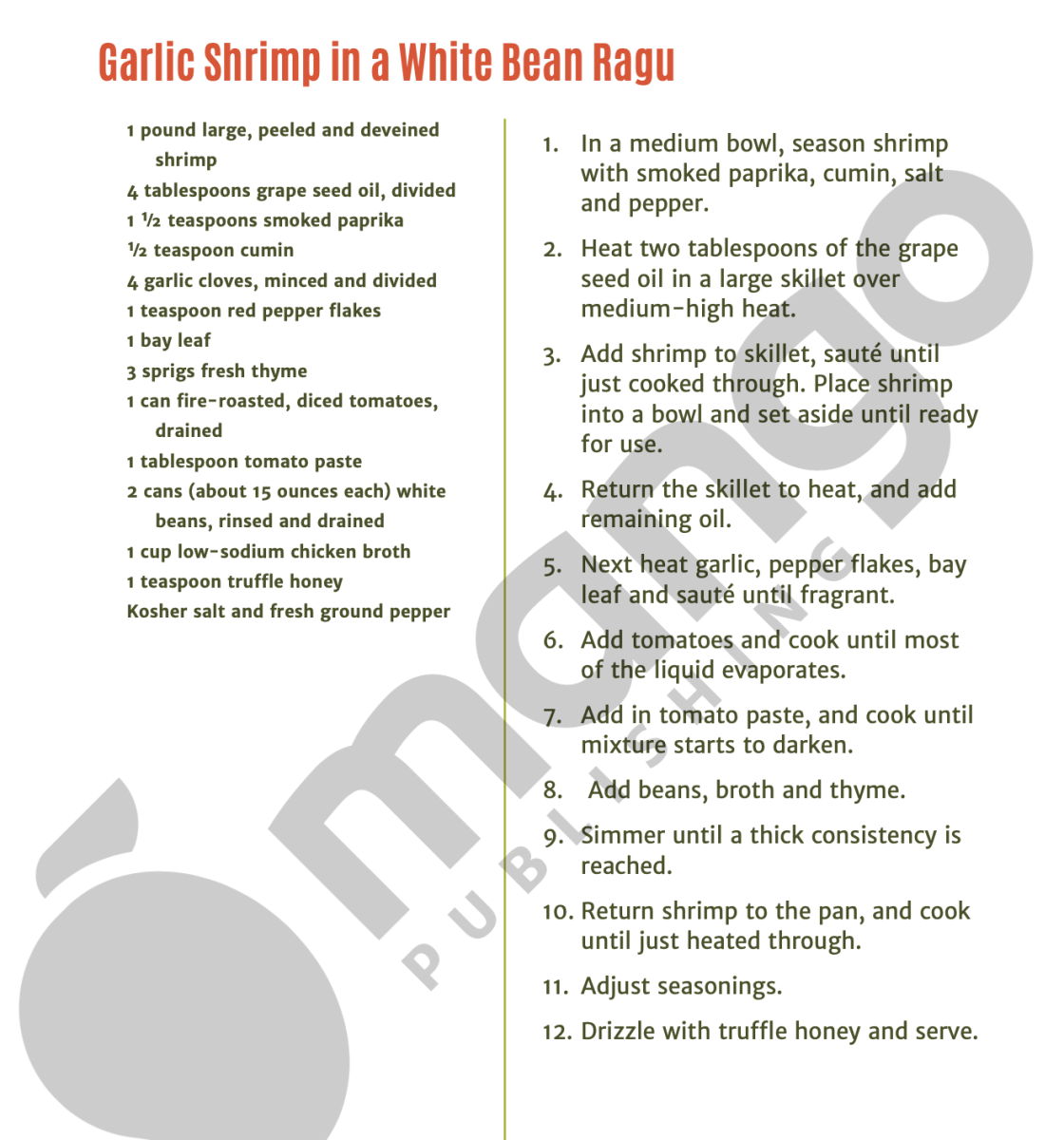 “It’s more of a winterish dish because of the ragu,” Ingraham says. “With the beans and the shrimp, I’m still trying to keep it light. This is something you could make a big bowl of and people could just come in and scoop it up.” 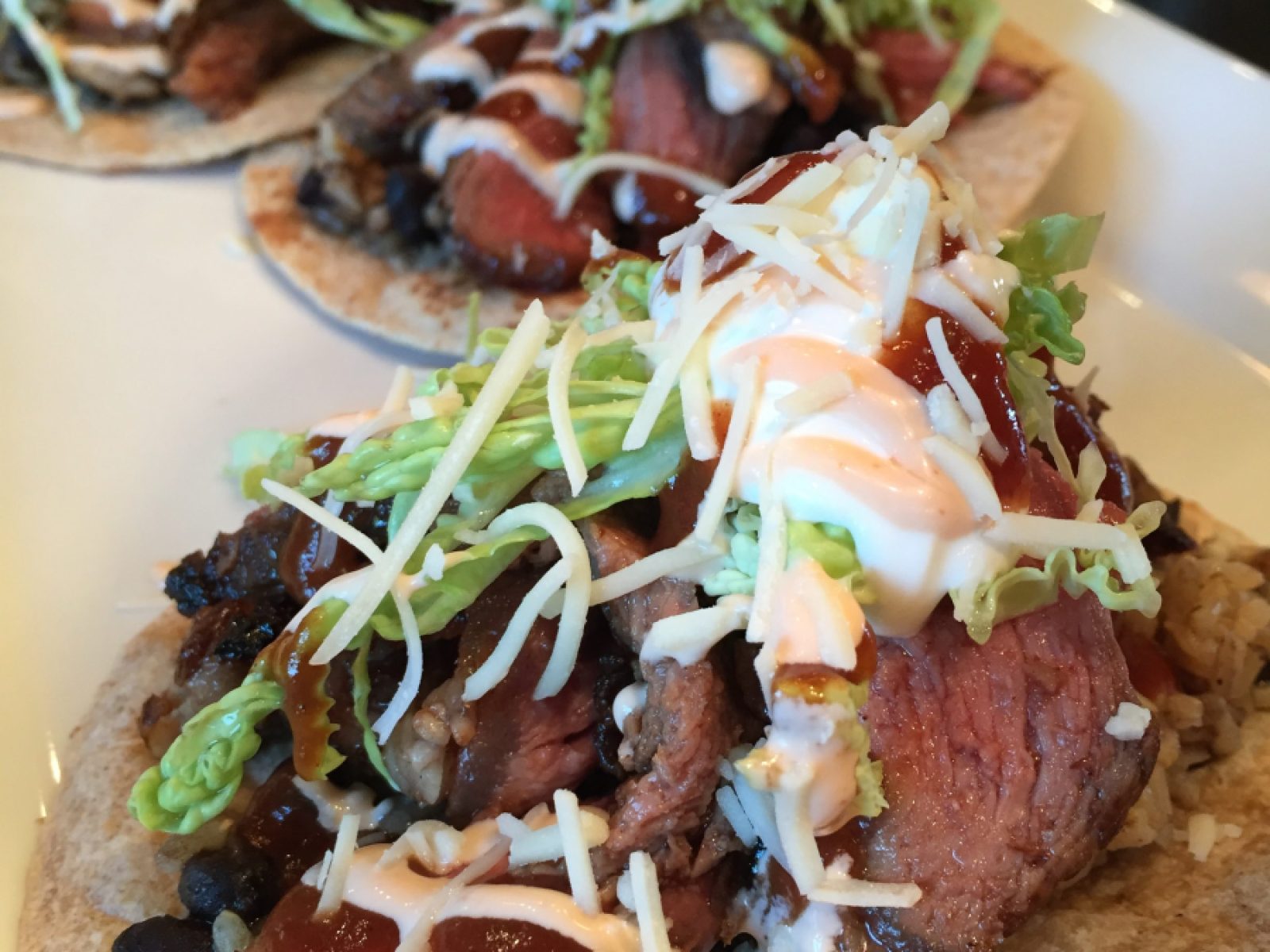 Coffee-Roasted Bison Ribeye Tacos
“We’re talking about another kind of taco here. Bison is a leaner meat, which makes it healthier,”
Ingraham says. “But not everybody is going to be able to go out and get bison, so you are welcome to use a regular ribeye or you can use strip steak that doesn’t have as much fat in it. It’ll still be very, very flavorful. I was trying to find a way to incorporate coffee into a recipe. So I said, ‘Why not coffee rub something?’ And I thought about this and here we are with the tacos. It’s very flavorful with the chipotle aioli that goes on top. It gives you a little spice for the steaks.” 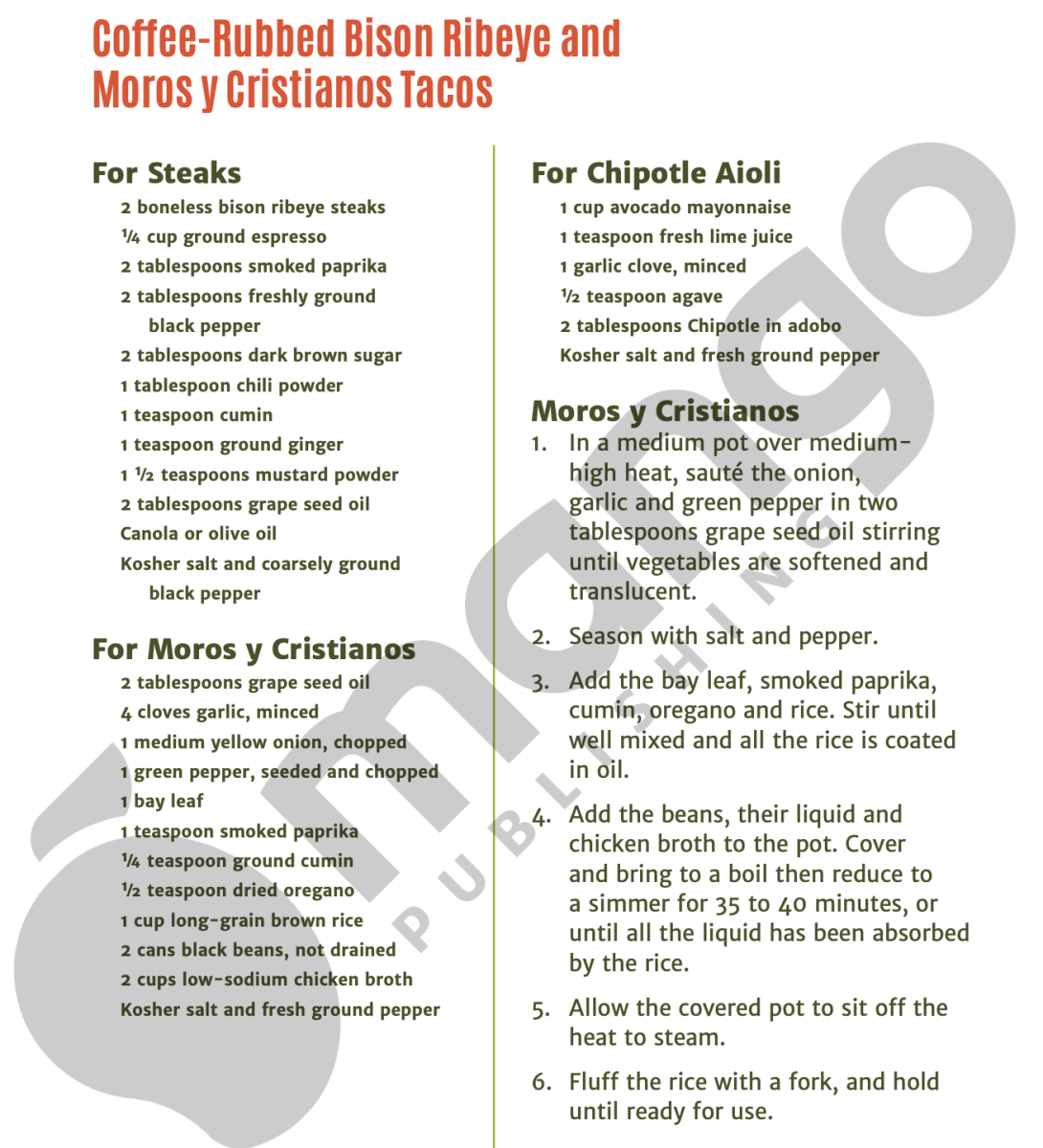 “You can customize the size of the portion by the size of your taco shell,” Ingraham says. “So you can go a little bigger or you can go with the really small ones and chop up the meat and put it inside and serve them in nice little taco stands or whatever. That would be a grab-and-go option. Or, you can actually do a taco bar and have this along with the portobello mushrooms and have people to make their own. You can do the portobello mushroom and then still put some of this coffee rub bison on top of that if you want to. There are many interchangeable things that you can do.”Mix and match and you’ll have your vegan option and your steak.” 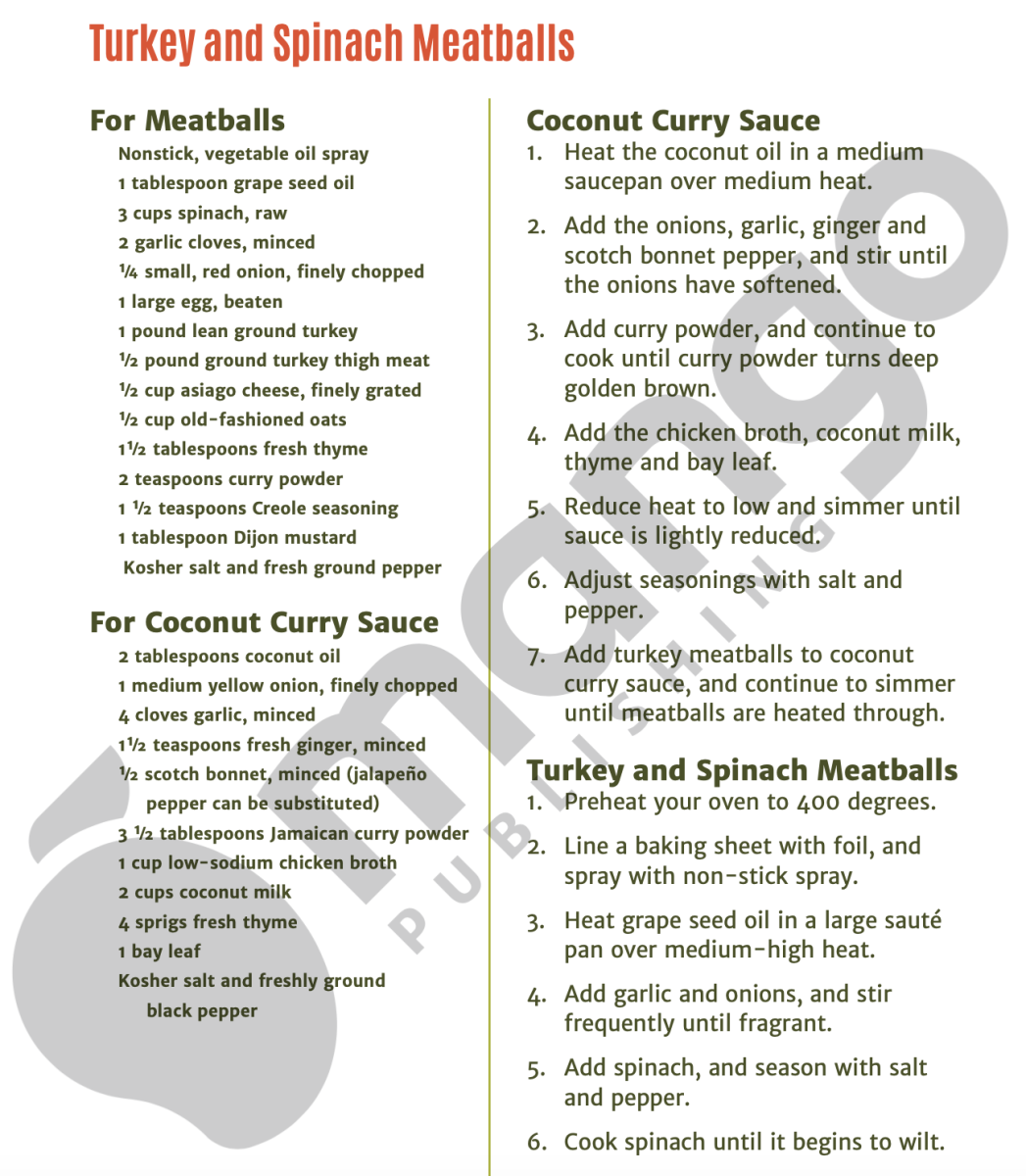 Turkey and Spinach Meatballs
“With this dish, you’re doing lean turkey and you’re also incorporating some spinach,” says Ingraham. “It’s nice and light and you’re doing it in a coconut curry sauce, which is totally different. You can do these separately and give everybody a little toothpick and they can pick them out if they want. Or you can have some nice coconut rice on the side and put them over the rice on a little plate. And there you go. I think it’s a great dish to add to your Super Bowl.”

“What’s the Super Bowl without some meatballs? But you’re always doing Swedish meatballs — that’s what everybody wants,” Ingraham says. “People go buy meatballs from somewhere, roast them, and then just douse them in that sweet sauce. That’s fine, but you want to do something a little bit different.”

Chef Richard Ingraham, who just released his first cookbook, Eating Well to Win, Inspired Living Through Inspired Cooking, has presided over more than a few Super Bowl parties while working as retired NBA star Dwyane Wade’s personal chef for the past decade. Though chicken wings in a creation called Flash Sauce are a favorite of Wade’s, Ingraham has had to expand his Super Bowl menu far beyond the land of fried foods in order to please the palate of the three-time NBA champion and his guests.

Sometimes, that means adding more fatty foods to the menu on purpose. “You want to make sure that you have some fatty foods like queso and bean dip,” Ingraham says. “You want to have those foods because you have people who are drinking as well. When you eat fattier foods that coat your stomach it retards the action of the alcohol a little. If you’re going healthy, that’s great, but you definitely want to have some fatty foods on your menu as well so that your guests can really enjoy themselves and have a great time.”

But should you want to aim a bit healthier this year, Ingraham’s got you covered with five recipes he suggests serving on Super Sunday. Good enough for Wade (and his wife Gabrielle Union), good enough for you, champ.

Sony's Best Noise-Canceling Earbuds Are Both on Sale