Is This Robotic Shape-Shifting Apartment the Future of Living?

In Logan Square, space comes with a push of a button

Then came the realization that it’s damn near impossible to live in a 400-square-foot studio, no matter how luxurious.

Ori (a riff on origami) transforms a studio apartment from a living room to a bedroom to a walk-in closet at the literal press of a button. Or by giving a command to Alexa or a companion mobile app, which is part of the reason why it’s been cast as the apartment of the future.

Need to see it to believe it? Observe:

After a year of development (we first covered the system here), Ori is currently being rolled out to apartment buildings in 10 cities around the country, and MODE Logan Square Apartments got its hands on one. We visited the modular living space to find out whether or not it’s actually, y’know, livable, as well as to flip a few switches and see the magic firsthand.

“It’s reacting to big trends,” says Hasier Larrea, Ori’s CEO and founder. “Forget about the McMansion and the four cars, millennials want to live where the action happens.” To do so affordably means living in smaller spaces that are as close to downtown as possible.

That’s not to say Ori is just for millennials who’ve committed to collecting experiences and not things. Empty nesters who boomerang back to city living could be into the concept, as might couples trying to cohabitate (and potentially work) in a studio apartment.

It may not be clear from our Midwestern vantage point, but Larrea sees a future where there’s simply not enough urban space to go around. “The problems that Hong Kong has today, and the problems that New York has today, Chicago will have tomorrow,” he says. 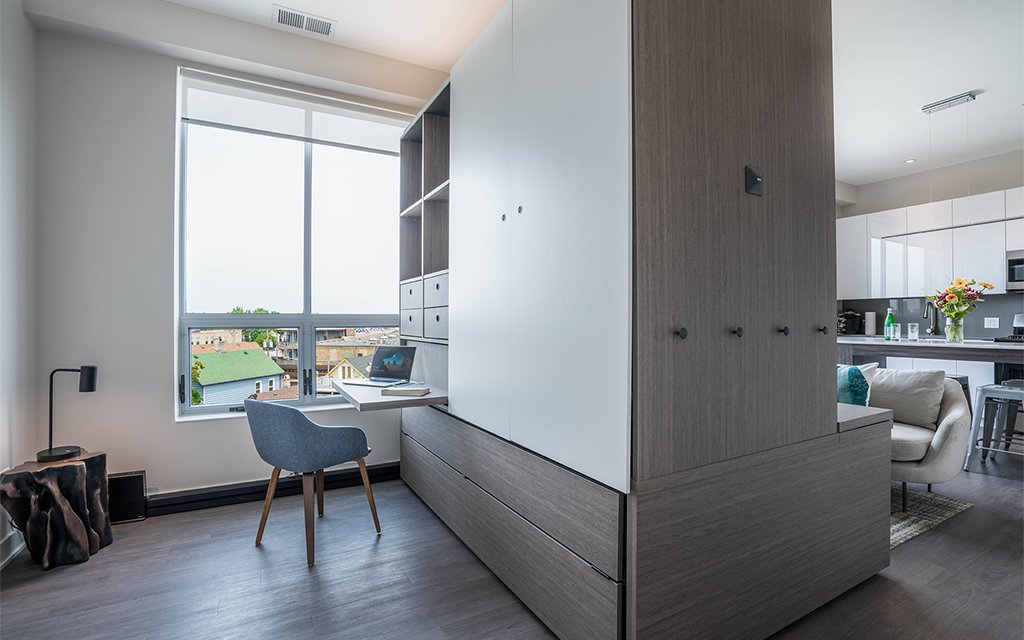 1. Division of space
You want to watch Game of Thrones. Your girlfriend needs to finish up some work. Ori can configure the space so one side has a pull-out desk for her, and the other side moves the furniture system and the TV closer to the couch. Separate spaces, achieved. “You get a studio that has almost the function of a one-bedroom but at a price that’s cheaper than the one-bedroom,” Larrea says.

For reference, studios in MODE Logan Square rent for under $1,600, and one bedrooms start at $2,000. The studio with Ori, which checks in at 568 square feet, is currently available to rent for $1,795. So the premium for maximizing your square footage comes in at about $250.

2. The “hotel room situation”
Here’s the thing about traditional studios: The bed is always right smack in the middle of the room. Which can be awkward if a date or your aunt or really any other human visits the apartment.

With Ori, your bed can be tucked away and hidden under the rest of the furniture until it’s time to sleep. Like a Murphy bed, except rather than pulling the bed down from the wall and fussing with grabbing pillows, the Ori bed can be stored fully made. Or fully unmade. Either way, it’s out of sight until you shift it into bed mode.

3. Lack of storage
Small apartments usually come with little to no closet space. Ori is tricked out with drawers and shelves to help you take advantage of every inch you have. And that’s in addition to the generously sized closet in the MODE apartment.

“We make every square foot count with technology,” Larrea says. “What we’re trying to do is liberate design and say it is possible to make a smaller apartment that acts as a much bigger apartment.” Larrea says he can see a future where Ori is used in hotel rooms and dorms, or even sold directly to consumers.

But until then, this one studio apartment right off the Western Blue Line stop will have to do.