A survey of the city’s best Japanese chef’s tables, from super formal to fun and approachable 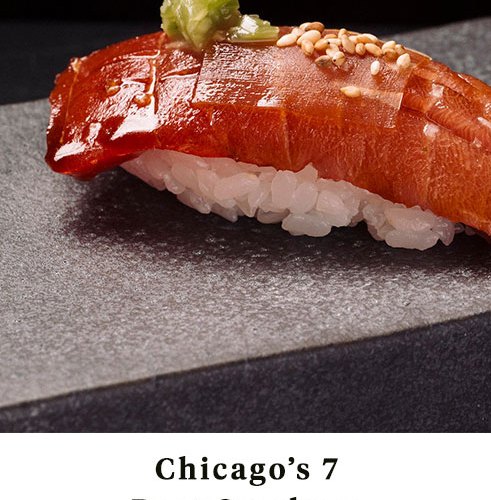 It was a Thursday night in early October and I was running late. Between getting suckered into an inevitably lengthy “just one quick beer” situation and a few surprise Blue Line holdups, the ETA for my 7:00 p.m. Omakase reservation at Sushi-san had slid from a punctual 6:55 to a markedly tardy 7:20. This level of lateness, in my experience, was seriously taboo when it came to Omakase, an extremely formal and often pricey multi-course Japanese tasting menu where each curated bite is constructed before your eyes in a painstaking and artful fashion. Wiping the sweat from my brow while yanking out my headphones, I stumbled into the restaurant with the puppy-eyed trepidation of a kid toting home a failing report card.

But as soon as I spotted Emily Clark, Communications Director for Lettuce Entertain You Restaurants and my host for the evening laughing amid a pleasantly deafening backdrop of late-’90s hip-hop jams, I knew this wasn’t your average chef’s table.

“It’s a very intimate experience but also a casual one where the music’s bumping and you get to interact with the chefs,” explains Sushi-san General Manager and Partner Amarit Dulyapaibul, describing his River North outpost’s recently-unveiled $45, 45-minute “OmaKAZE” program. “The idea of an Omakase can be intimidating for a lot of folks. You’ve got to carve out two-and-a-half hours of your week, spend $200 and you’re not quite sure what you’re getting yourself into. Our goal is to offer an approachable, accessible, fun, low commitment Omakase, still using the absolute best ingredients that we can find.”

Sushi-san delivered on its promise that night, welcoming me with open arms and a frosty, nerve-soothing mug of Asahi. From my perch behind the long, l-shaped counter, I watched as a handful of chefs trained by celebrated Master Sushi Chef Kaze Chan sliced and assembled their way through 10 ocean-fresh, supremely efficient courses, each more flavorful than the last. The optional (read: 100% worth it) sake pairing made for the perfect chaser.

“All of our sushi chefs have been working with Kaze to develop this menu,” Dulyapaibul continues. “Fresh Faroe Island salmon, beautiful sustainably caught bluefin tuna from Balfego and Spain, live Japanese hamachi and kampachi, finishing off with our Japanese pancakes — all these great ingredients that you’d expect on a $200 menu, and we’re giving it to you in less than an hour for 45 bucks.”

The offering comes on the heels of a rising tide of Omakase-style dining experiences around Chicago: four dedicated Omakase-only restaurants have opened their doors in the last year-and-a-half alone, joining a growing number of established spots already featuring a chef’s table menu. In contrast to Sushi-san, many of these fall on the more traditional end of the spectrum, with limited seatings, elongated presentations and fine-dining price tags, while others land somewhere in the middle. The assortment is refreshingly diverse, providing entry for burger-budget skeptics to the upmarket Alinea faithful alike. In some ways, these Omakases act as a microcosm for the city’s culinary landscape as a whole: accessible yet inventive, confident yet unpretentious, with something for everyone.

“The counter has been absolutely packed,” says Dulyapaibul. “On any given night we have people that have just flown back from Narita, literally just touched down, and they’re like, ‘Hey, I’m jonesing for sushi. Could you guys tell me what cuts you have?’ And then we have guests that have never eaten sushi or aren’t very comfortable with it and are just looking to get their feet wet. That’s got to be the best part.”

No matter what you’re looking for, you’re bound to find something delicious and exciting at one of these seven standout Chicago Omakases.

As mentioned above, this lively River North joint’s 45 minute, $45 Omakase experience, packed with hand-picked seafood flown in daily from Japan’s Toyosu Fish Market, has taken off with a bang. But according to General Manager and Partner Amarit Dulyapaibul, the speedy bargain meal is actually just a taste of the wonders to come.

“The 45-minute Omakase is really part of a larger plan to move Master Sushi Chef Kaze upstairs and create a really high-end Omakase with him at the beginning of next year,” Dulyapaibul reveals. “You’ll be able to join Chef Kaze for a more formal, intimate experience with seasonal, luxury ingredients. You’ll still see the bluefin tuna from downstairs, but perhaps just the cheek of the tuna paired with an A5 Miyazaki beef or a great caviar.”

This West Loop stunner opened late last year under the watchful eyes of local cocktail legend Julia Momose (Aviary, GreenRiver) alongside decorated Senza and Oriole vets Executive Chef Noah Sandoval and Chef de Cuisine Mariya Russell. Guests seated in the sleek minimalist dining room can indulge in Momose’s liquid musings while munching on elegant a la carte Japanese bar bites, while those lucky enough to snag a reservation at Kikkō, the bar’s newly minted, one-Michelin-star basement Omakase, can expect a decadent $130 seven-course spread with all the bells and whistles. And you don’t have to be a drinker to partake in Momose’s must-try cocktail pairings — her spirit-free creations are every bit as intoxicatingly brilliant as the boozy options.

At this handsome, wood-lined West Loop eight-seater, Korean superstar Chef Sangtae Park shows off his well-honed technique through 17 delectable, seasonally inspired courses. And while every morsel is worth savoring, it’s Chef Park’s Edomae-style sushi, a historic form of sushi-making highlighting different marination and preservation methods, that truly steals the show (and justifies the $125 price tag).

A refined palette of beige, gold and slate-gray sets the tone inside this tiny West Loop den from sushi master B.K. Park, where a 12-seat sushi counter (plus a dining room set for 10) promises a multitude of mouthwatering courses for a cool $175 a head. Look for king crab doused in uni miso and A5 Wagyu butter, Kusshi oysters crowned with smoked trout roe and seasonal sake-marinated saltwater eel, among other delicacies.

Japonais by Morimoto alum Executive Chef Joseph Fontelera has been indoctrinating omakase newcomers at this casual West Town stalwart since taking the helm in 2017. Diners are treated to nine exquisite, chef-guided courses peppered with seasonal twists and off-menu whims for $110, with an optional beverage pairing weighing in at an additional $55. The airy, inviting space evokes quiet simplicity, both aesthetically and culinarily, with delicate cuts of sashimi and plump nigiri leading the charge.

Bucktown’s finest shell out a pretty penny for the chance to sample their way through Chef Otto Phan’s reservation-only Omakase, a whirlwind $220 tour that spans 20-odd courses and entertains just two seatings of eight per night. Chef Phan’s menu emphasizes traditional Edomae-style sushi, with special attention to attaining clarity and balance in every bite. And he’s particularly mindful when it comes to rice — it’s the only restaurant in the country that stacks its nigiri atop a pillow of imported Inochi no Ichi specialty sushi rice seasoned with aged red vinegar.

Is Hot Tub Sex Ever Good?
Meet the New-Age Strength-Training Tool That Firefighters Swear By
Bernie Sanders’ Inauguration Mittens Are Made From Recycled Wool by a Vermont Teacher Because of Course They Are
Meet Balldo, The Device That Turns Your Testicles Into a Second Penis
Is Roger Federer Moonlighting as a Peloton Champion?
What About the Trans Athletes Who Compete — And Win — in Men’s Sports?

What About the Trans Athletes Who Compete — And Win — in Men’s Sports?
16 Albums to Make You Feel Warmer in the Dead of Winter
Are There Any Tangible Benefits to Chugging Water First Thing in the Morning?
Is It Time to Admit That Tom Brady’s Witch Doctor Wellness Routine Actually Works?