Excerpt: Will Guidara Discusses the Power of Going Above and Beyond in His New Book “Unreasonable Hospitality”

The business of pleasing people is never easy, and anyone who’s worked in hospitality can tell you it’s an uphill battle. No one knows better than Will Guidara — the former owner of Make It Nice — who transformed the hospitality group’s most distinguished restaurant, Eleven Madison Park, into the best restaurant in the world. Not only did EMP snag the top spot on The World’s 50 Best Restaurants list, it also received four stars from The New York Times and numerous James Beard Awards with Guidara at the helm. In his new book, Unreasonable Hospitality: The Remarkable Power of Giving People More Than They Expect, Guidara takes a deep dive into the potential of going above and beyond.

Guidara’s team at EMP was known for going to great lengths to dazzle guests — like filling a private dining room with sand, beach chairs and Mai Tais after a couple had to cancel their vacation. But those gestures, whether big or small, all tied back to the same philosophy: that people will always have the desire to be cared for. In this excerpt from Unreasonable Hospitality, Guidara talks about how an end-of-meal gesture conjured both plentifulness and closure.

The very end of the meal is always precarious from a hospitality perspective. First of all, it’s time to pay, and that’s never fun. The cold, hard reality of those numbers on a check can throw cold water on the magical vibe you’ve built over the course of the evening.

And the timing is hard to get right. When some guests are ready to leave, they’re ready to leave. People get impatient (I get impatient!) if the process of getting the check, paying it, and getting out the door takes too long. But at the same time, you can never put the check down before the guest has asked for it, because that gives them the feeling you’re trying to rush them out.

At EMP, we used hospitality to solve both potential problems. We didn’t wait for the guest to ask for the check. Instead, at the end of their meal, we’d bring the bill over and drop it off — along with an entire bottle of cognac.

We’d pour everyone at the table a splash and leave the full bottle on the table: “Please, help yourself to as much as you like, with our compliments. And when you’re ready, your check is right here.”

People were delighted by this. The ability to pour for themselves felt even more luxurious and surprising to them after a three-hour meal where they hadn’t had to lift a finger, and that was the feeling I was trying to replicate: the moment, at the end of a dinner party, when a guest leans forward, grabs the mostly empty bottle of wine left on the table, and tops off everyone’s glass. 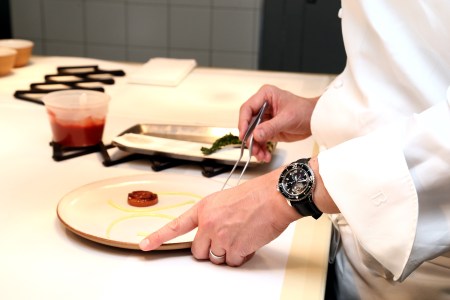 But more important, there’s no way a person who has just been given a full bottle of free booze can feel like they’re being rushed out. And yet, at the same time, the check was right there whenever they were ready for it. We no longer had to “drop the check” on one of our guests, and they would never have to ask for it again.

This is a hospitality solution: a problem that we solved not by sneakily chipping away at the service we were offering, but by blowing it out in the opposite direction — by giving more, not less.

Too often, when we’re faced with a pernicious problem in our businesses, we fall back on the tried-and-true: push harder, be more efficient, cut back. Especially when the problems are nagging ones that erode the bottom line or those that persist because our organizations rely on humans and all their wonderful and fallible ways.

Imagine, though, that instead of resorting to one of these fallback positions, you asked yourself: What is the hospitality solution? What if you forced yourself to be creative, to develop a solution that worked because of — not in spite of— your dedication to generosity and extraordinary service?

These are almost always harder to execute, and coming up with them will definitely call on your creative side. But they’re almost always a win. If a stumble at the end of a meal can undo all the goodwill a restaurant has earned in the three hours preceding it, then a gorgeous, gracious gesture at the end can have the opposite effect. (This is true in every service industry.) And while dropping off a full bottle of expensive booze at every table seemed like an unreasonably extravagant gesture, it was actually cost-effective. After an elaborate multicourse dinner (and usually plenty of wine), few people were interested in drinking more than a sip of that cognac. Yet the feeling of abundance was there.

Excerpted from Unreasonable Hospitality: The Remarkable Power of Giving People More Than They Expect by Will Guidara, published by Optimism Press, an imprint of the Penguin Publishing Group, a division of Penguin Random House, LLC. Copyright © 2022 by Will Guidara.