With all due respect to LCD Soundsystem and the approximately 200 shows they played this year, New York we love you — but you’re not bringing us down.

Because despite tumultuous politics, protests and a terror attack or two, we’re still standing. And we have no intentions of going anywhere (though you can mostly blame that on the MTA). From Studio 54 reborn to underground crypt concerts, from chopped cheese sammies to a Chinatown revival, here’s a look back at your favorite stories of 2017.

Staycation Invasion
In 2016, the city was bombarded by food halls. Realtors looked at the success of Smorgasburg, moved it indoors, and now they’re everywhere. This year, it was a parade of new boutique hotels with much more to offer than room service and wake-up calls, including a lot of gorgeous rooftops and a grown-up Studio 54, along with a diminished emphasis on spending time in the room itself. Long live the staycation. Even if it’s unplanned.

Nothing Says Luxury in New York Like Getting Away From It All
Manhattan is a 23-square-mile island. If you want some damn peace and quiet, you’ll need to be creative — and willing to spend. If you just need a weekend away, try this secluded treehouse cabin a short drive Upstate. Looking for an extended stay? Why not buy your own private island compound (we’ve got one for fans of Gatsby, and another for acolytes of Frank Lloyd Wright). At the very least, treat yourself to an evening at a secret cocktail club … or join the VIP club that can book you a ticket to space.

That Said, There Are Bargains to Be Found. Especially on Food.
Take it from NYC’s top chefs, who offered up their picks for the city’s best holes-in-the-wall in a series we call the Eat Index. Also of interest: the Book of Sandwich, where we covered New York’s best Jewish delis, BBQ and a little-known icon, the chopped cheese. And carnivores beware, 2017 also brought a new — and quite unexpected — burger contender to town.

When Times Got Tough, We Laughed at Ourselves
Life is too important to be taken seriously, they say. We concur. MTA crush your spirit on the daily this year (so much so that you started biking to work)? We just used that as fodder to help us name the 50 Worst People On Your Morning Commute. We also had a laugh (and a cry) at ourselves after endorsing the sh*tstorm that was Fyre Fest. And just this month, we asked our favorite NYC comedians to share their favorite jokes about the city. Offended? Maybe it’s time to move to Los Angeles.

We Already Had Style — But Now We Have More
Is the rent too damn high on Savile Row? Because some of the best names in tailoring crossed the pond and set up shop in the Big Apple this year, from the soft-shouldered Huntsman & Sons to the ever-dap Richard James. And if that wasn’t enough, Drake’s, Thom Sweeney and Miami’s the Webster flung doors open as well. Not sure what to do with all that fashion nonsense? Take a hint or two from the most down-to-earth man in the menswear game, our dear friend (and favorite interviewee of the year) Billy Reid.

And Remember: If You Ever Grow Tired of New York, Just Try a New Neighborhood
Looking to pull up your roots altogether? We asked six real-estate pros to name New York’s next “it” neighborhood. On the shortlist: the reinvented Chinatown, where Chinese Tuxedo (which Eater just voted joint of 2017) reigns supreme. We also explored Midtown with the chef behind a new “” in an abandoned bank vault, lived it up like Kevin McCallister and chatted with NYC’s resident whale-watching laureate.

Whether your white whale is a literal or figurative one, it’s out there. You just need to start looking for it. 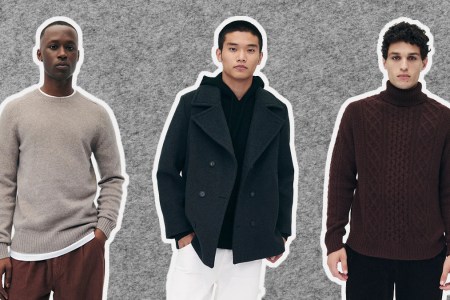