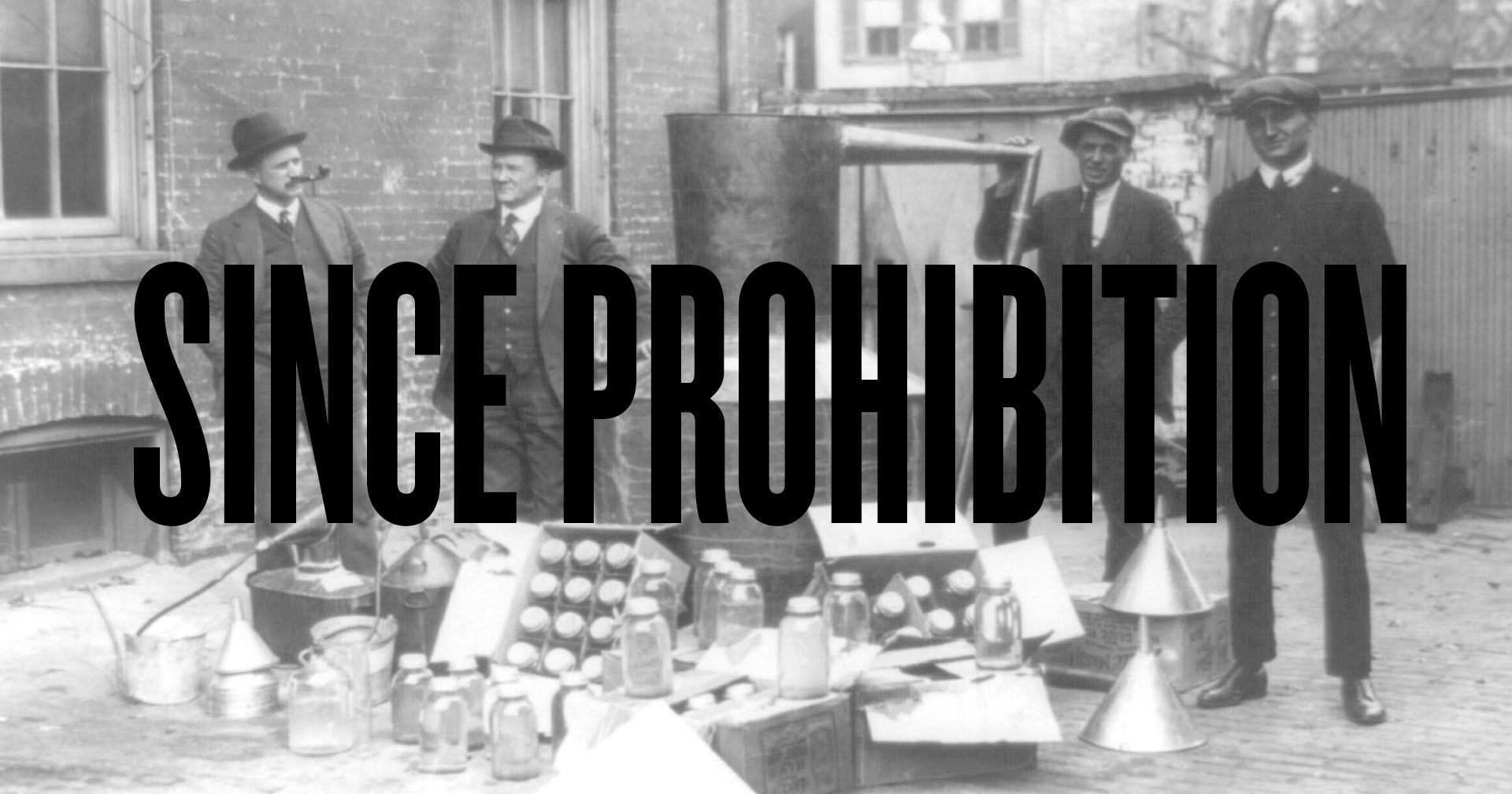 The Volstead Act officially kicked off Prohibition on January 17th, 1920.

With that act, the manufacture, sale and transport of alcohol was banned — although you wouldn’t necessarily know it, given the proliferation of bootlegging and speakeasies. Still, those were dark days for America’s drinking public, and it certainly divided the history of the industry: there was the time before Prohibition, and the time after.

Now that we’re at the 100-year mark of that milestone legislation — which was thankfully repealed 13 years later — we decided to look back at the biggest moments in American booze since the 18th Amendment initially went into effect. Below, you’ll find 100 events, ideas, people and bits of pop-culture ephemera that have shaped the beer, wine and spirits industries in America over the last century. 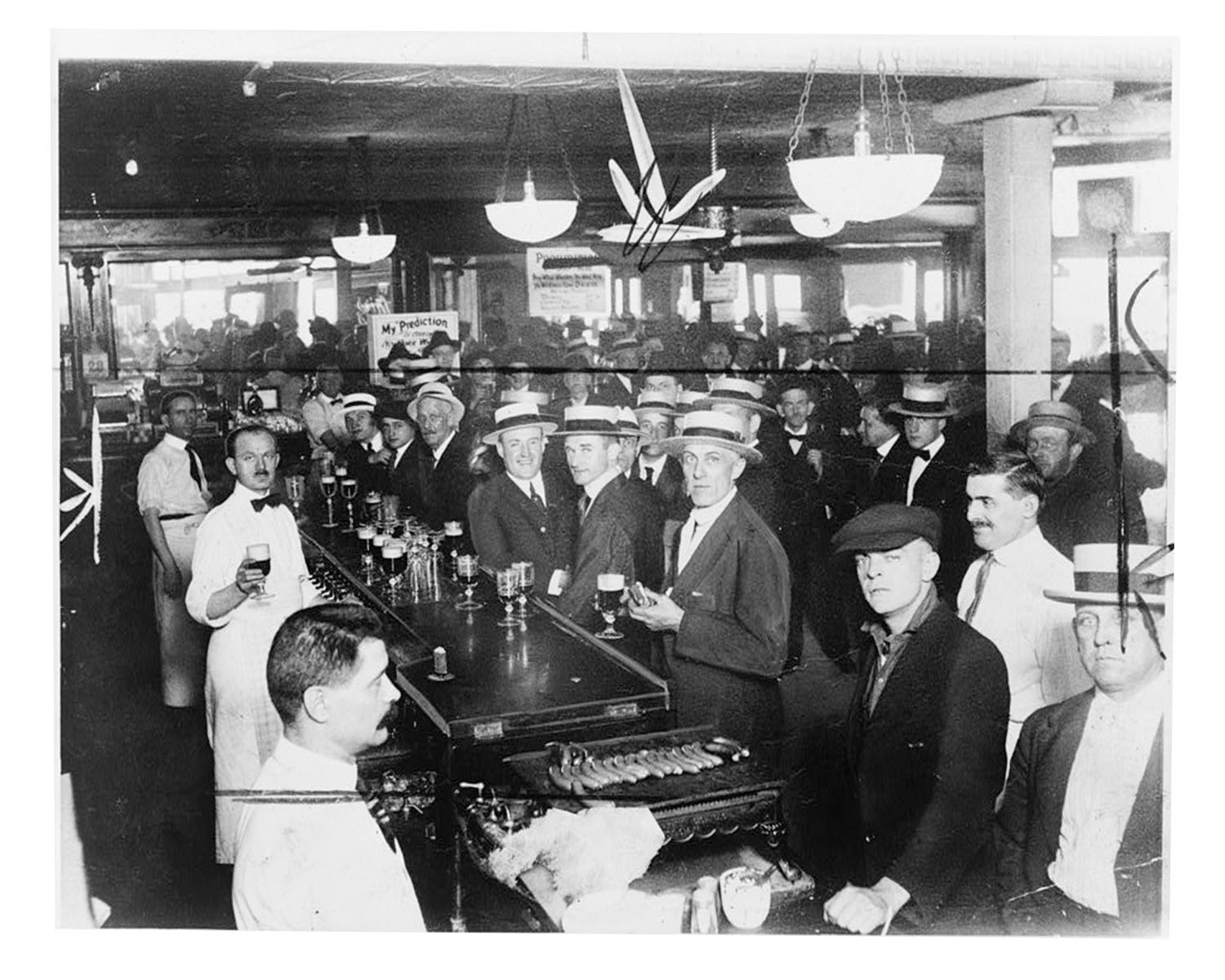 The Volstead Act (as it was informally called) prohibited the manufacture and sale of alcoholic beverages; however, loopholes still allowed families to make up to 200 gallons per year for home use with the help of “wine bricks.” Another exception was made for sacramental wine for the church. The federal government also made an exception for “medicinal whiskey” prescribed by a doctor and sold through a pharmacy. The government issued 10 licenses, but only six were ever used.

3. The Great Gatsby is released

“I picked him for a bootlegger the first time I saw him, and I wasn’t far wrong.”

King of the Bootleggers

4. Bootlegger George Remus is indicted for thousands of violations of the Volstead Act. “He built this enormous octopus of a bootlegging operation. And most cleverly, he started a drug company, a wholesaler to drug stores. And then he would send his trucks out, his own men would hijack those trucks and put it into the illegal liquor trade,” writer Dan Okrent later noted.

The Women’s Organization for National
Prohibition Reform / Library of Congress

6. Pauline Sabin forms The Women’s Organization for National Prohibition Reform. Consisting largely of “society” women and wives of industry leaders, the group argues for the repeal of Prohibition. Within two years, their membership is nearly 1.5 million. 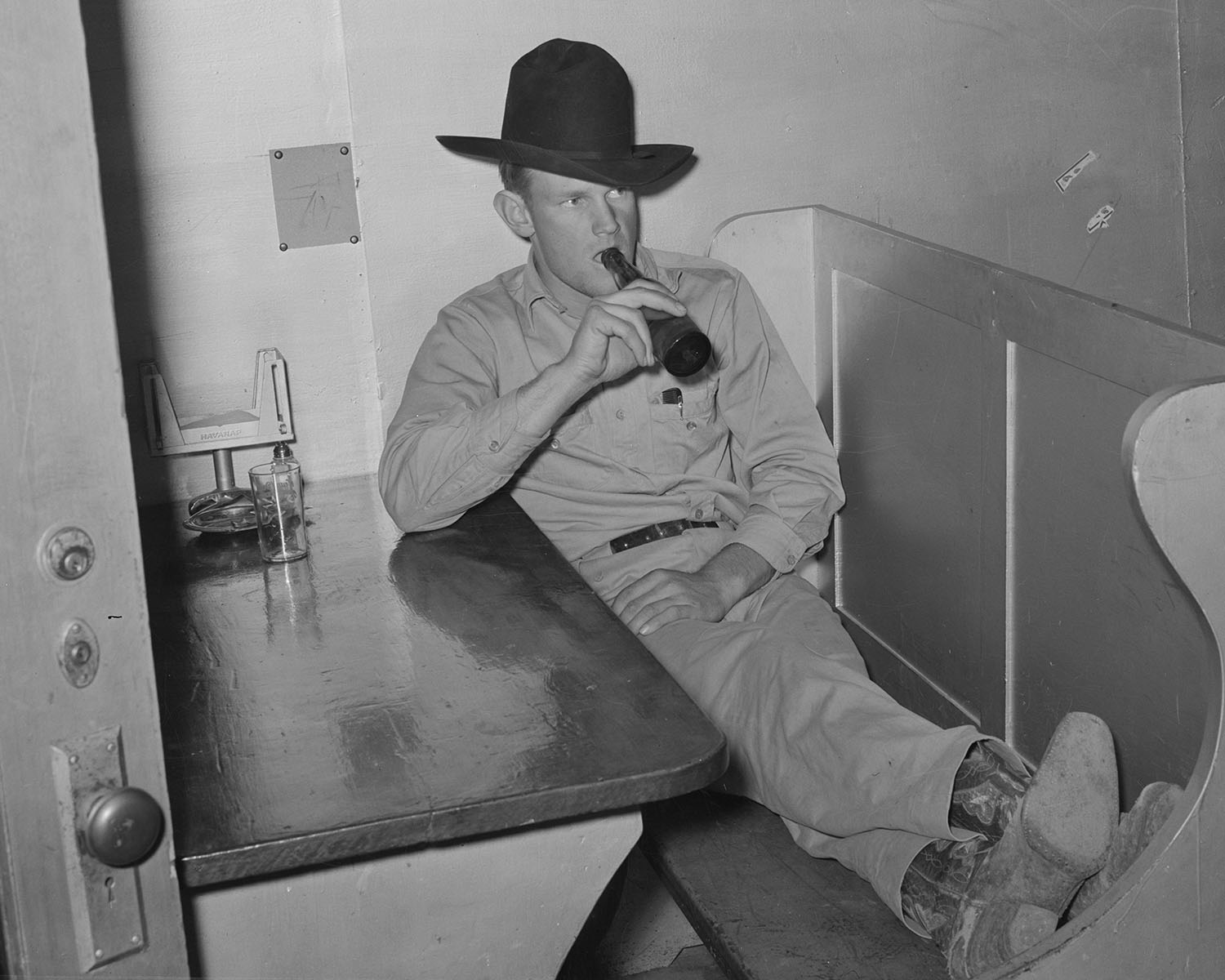 8. Legend has it that Ernest Hemingway creates what’s now known as the “Hemingway daiquiri” during an impromptu visit to El Floridita in Havana sometime during the decade, although that story is a bit of a stretch.

Don’s Beachcomber opens in Hollywood (the name is later changed to Don the Beachcomber).

13. Ed Shapira and his bothers invest in Heaven Hill Distillery in Bardstown, KY.

17. The Margarita is invented

18. The mint julep becomes the official drink of the Kentucky Derby

19. Elise John Miller takes over as President of Miller Brewing

She becomes the first woman to ever operate a major brewery. 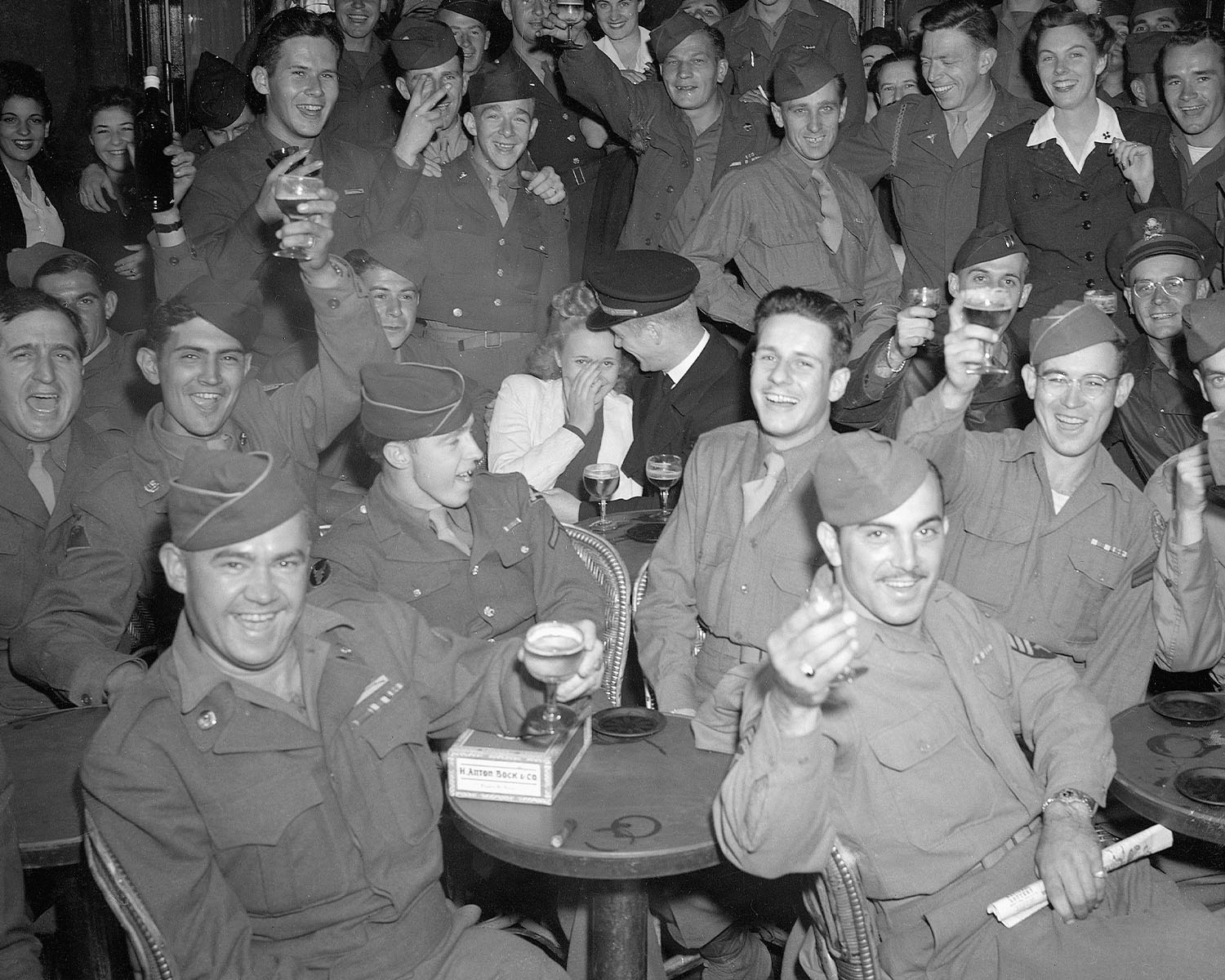 Paris, France- American troops in a club in Paris raise their glasses high and drain them as they stage a jubilant celebration of news of Japan’s surrender. Brettman / Getty Images

20. Brewers are required to allocate 15 percent of their production for military use

21. The Mai Tai is invented at the tiki bar Trader Vic’s

In the Supreme Court case Goesart v. Cleary, a Michigan law prohibiting women from being bartenders in all cities with a population of 50,000 or more is upheld. It will later be overruled in 1976. 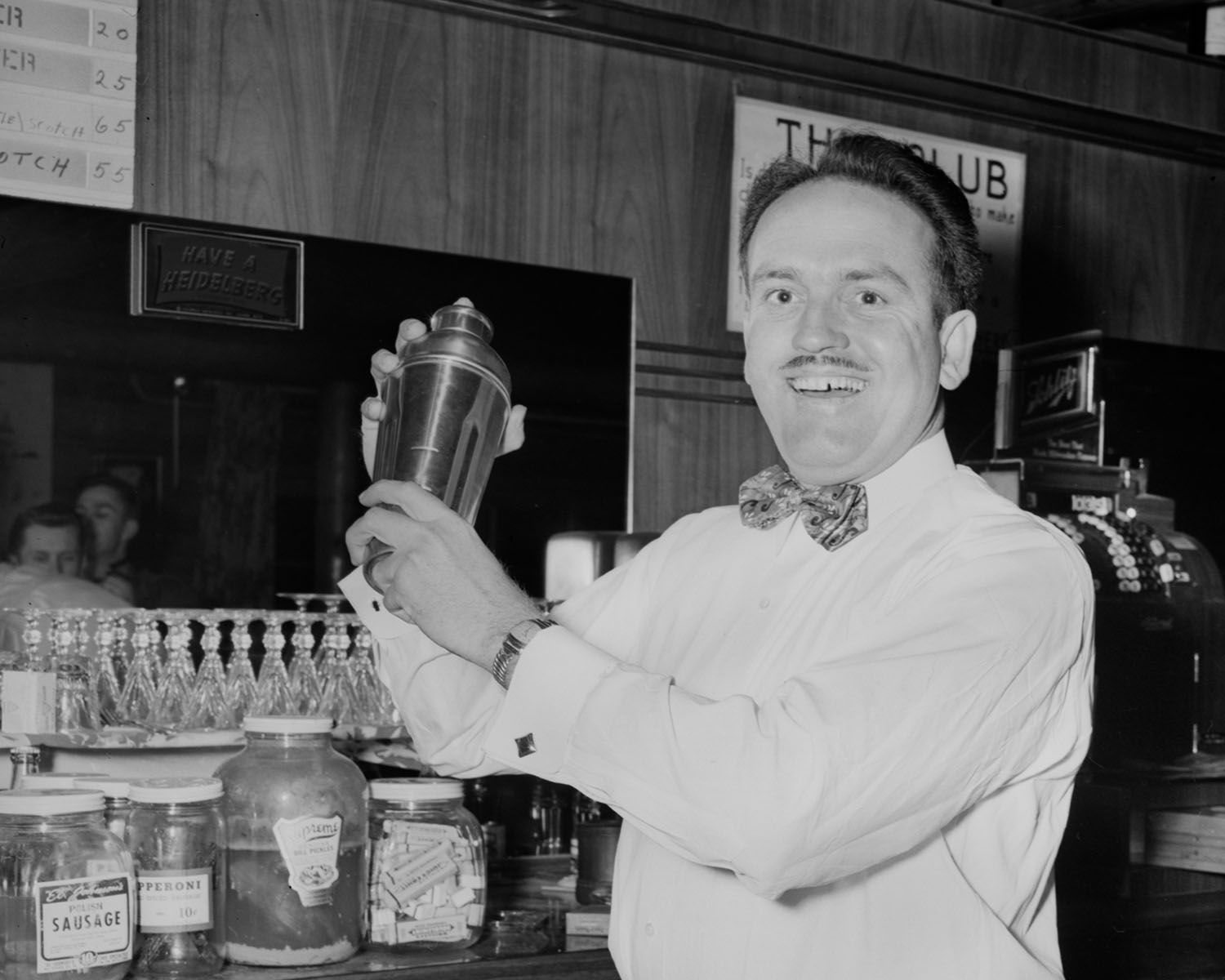 25. Hank Williams records “There’s a Tear in My Beer,” but the song doesn’t become a hit until 38 years later, when it’s remade by Hank, Jr.

26. Ted Saucier releases the cocktail book Bottoms Up! This eventually leads to the re-introduction of a pre-Prohibition cocktail favorite: the Last Word.

A U.S. embargo curtails rum importation from the island. Bacardi relocates to Bermuda.

New Zealander Morton W. Coutts patents the continuous fermentation technique by splitting the functions of the yeast into two stages — one where it grows and another where it ferments — creating a continuous flow by which brewers can add raw materials in the first stage and draw off a steady supply of beer from the second, thus increasing production efficiency.

Sportsman’s Park is purchased by August Busch in April 1953 for $800,000. The ballpark is renamed Budweiser Stadium briefly before being named Busch Stadium.

“Ladies and gentlemen,
this is Jack Daniel’s,
and it’s the nectar of the gods,”

33. Soviet leader Nikita Khrushchev enjoys a bourbon highball during a meeting with Richard Nixon. “This is very good whiskey,” he said. “But you Americans spoil it. You put in more ice than whiskey.” 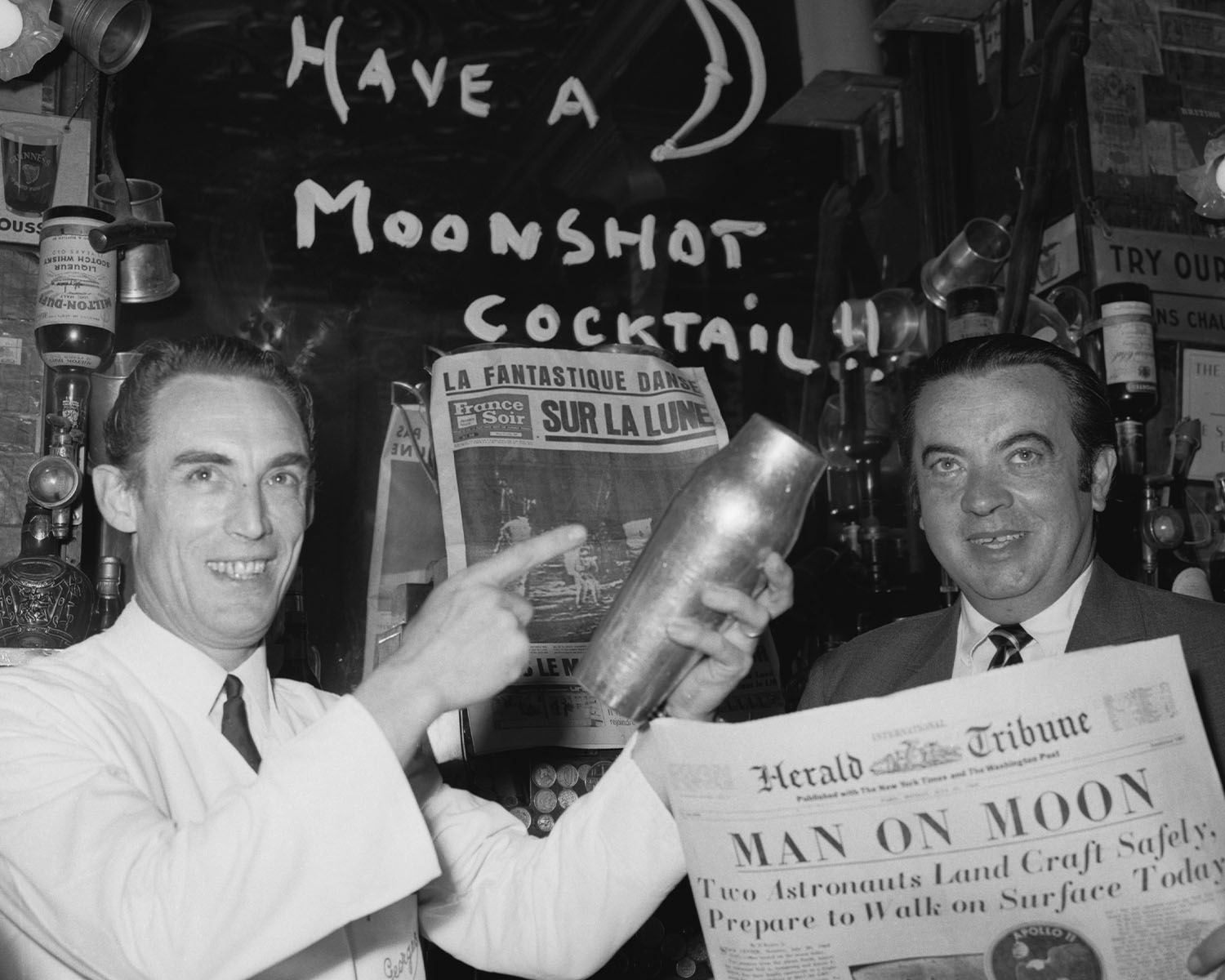 Harry’s American Bar launches a new cocktail in honor of the Apollo-11 astronauts. Christened “Moon Shot” it is “guaranteed to make anybody take off” / Bettman / Getty Images

36. Sangria is introduced to the U.S. at the World’s Fair in Seattle

37. With the opening of the first T.G.I. Friday’s, the singles bars movement begins.

39. Mississippi is the last state to repeal Prohibition 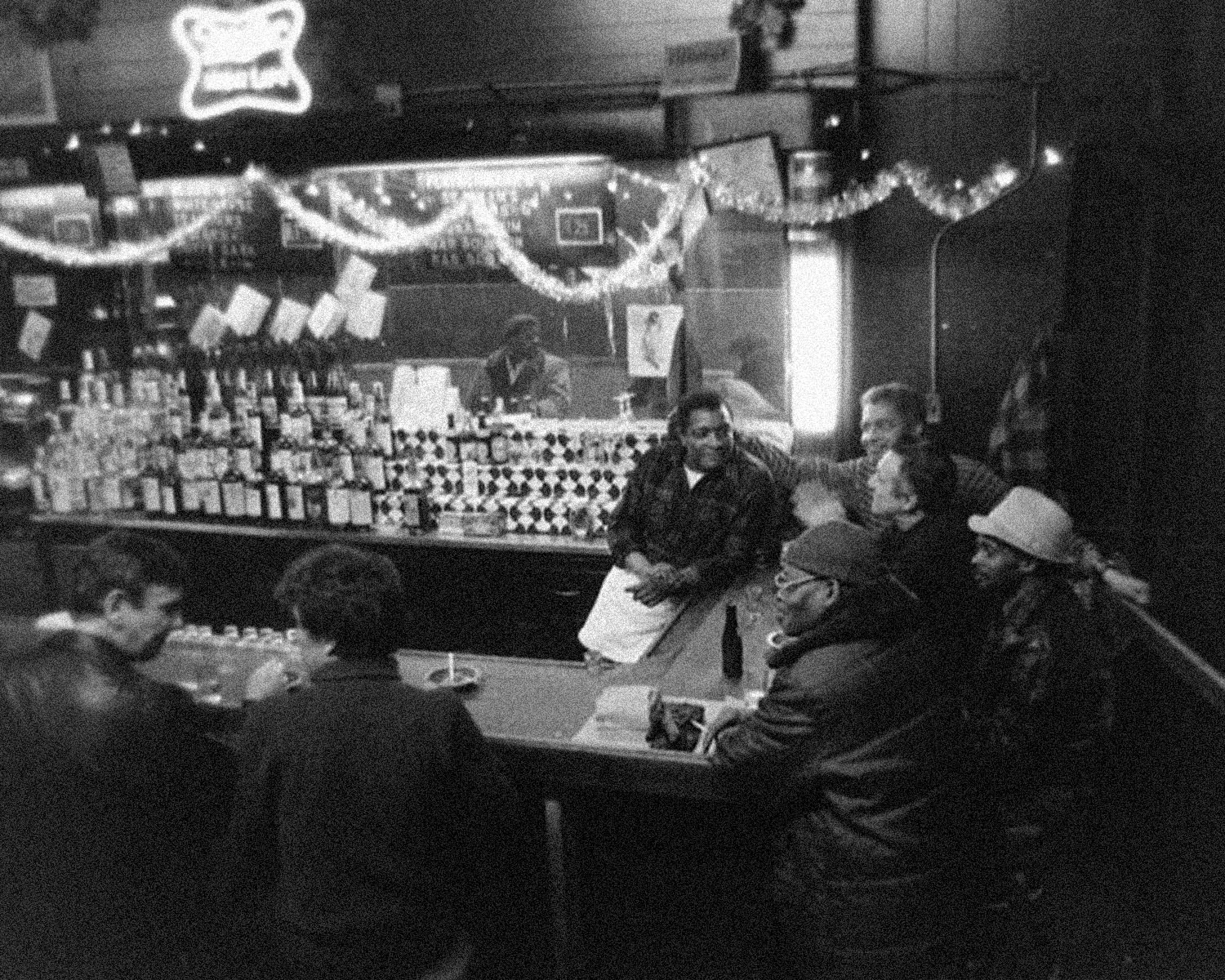 Patrons and a bartender inside Terminal Bar, NYC / Sheldon Nadelman

41. The frozen Margarita machine is invented in Dallas

Cascade hops, now the most widely used hop variety by American craft breweries, are released to brewers for the first time after being developed at Oregon State University (and named for the Cascade mountain range) by Dr. Stanley Nelson Brooks and Jack Horner.

44. Vodka outsells whiskey in the US for the first time

It still does to this day.

47. The Judgement of Paris takes place

The Judgement of Paris (formally known as the Paris Wine Tasting of 1976) establishes California as a serious contender in the wine-making game after a panel of judges score several Cali-based wines above top-rated Bordeaux and white Burgundy in a blind tasting.

49. Smokey and the Bandit released — aka the movie in which Burt Reynolds smuggles a truck full of Coors (!) across the country.

51. Home brewing becomes legal on a federal level in the U.S.; The American Homebrewers Association is formed

53. Herbert Allen introduces the “Screwpull” corkscrew, a device made to make opening wine bottles fool-proof. The screwpull was later purchased by Le Cruset and is now part of the Museum of Modern Art’s permanent collection. 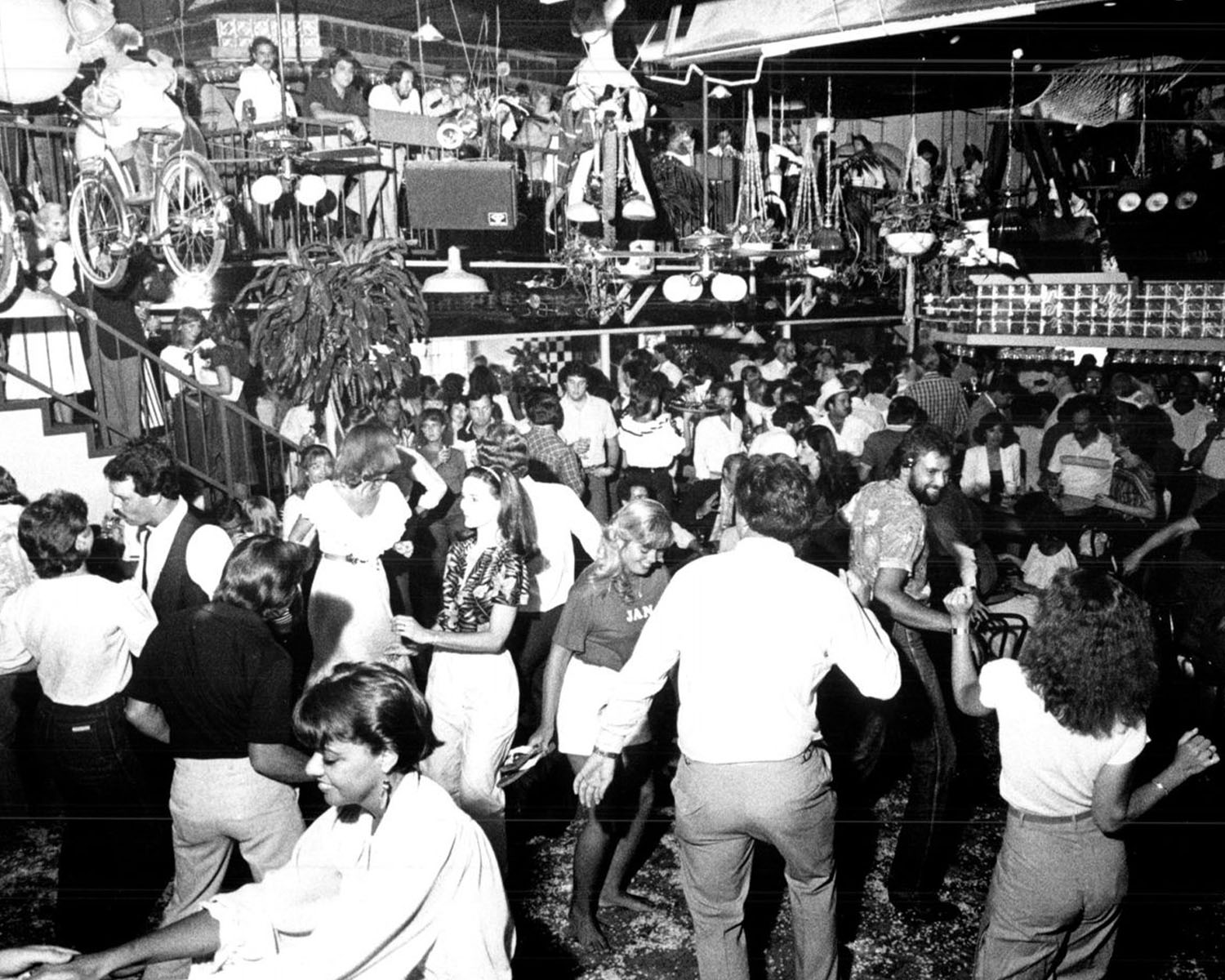 60. An outbreak of grapevine-destroying pest Phylloxera occurs in Napa, destroying around 50,000 acres, about half of the total vines

61. Buffalo Bill’s Brewery, the first brewpub in America, opens its doors in Hayward, California. Prior to January of that year, it was illegal for brewers to sell directly to consumers, but California Assembly Bill 3610 allows them to do so provided they also serve food.

65. The Untouchables is released, and we all relive Prohibition 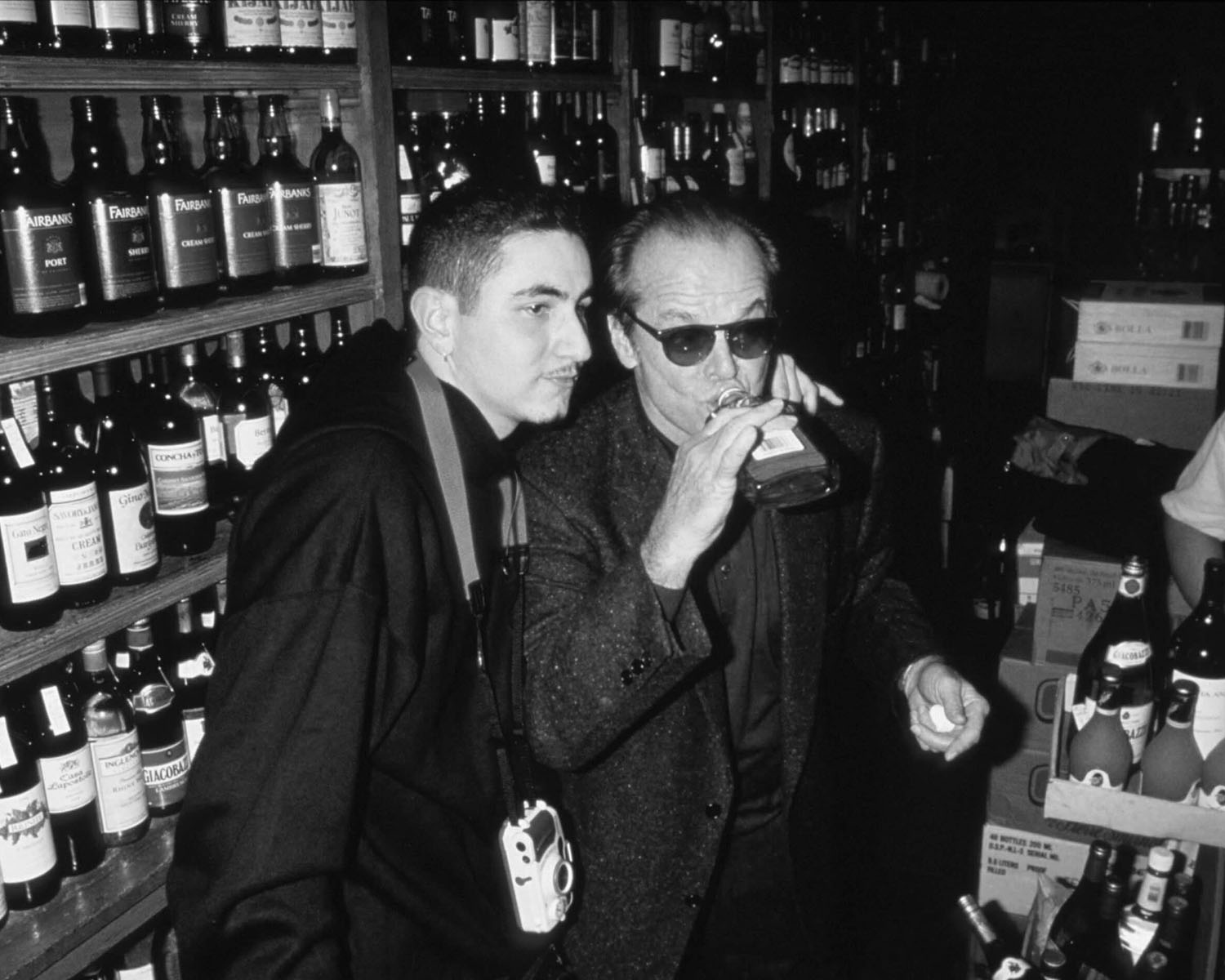 69. Sierra Nevada becomes the first microbrewery to break out of that classification.

“I ate his liver with some fava beans and a nice chianti.”

— Hannibal Lecter, The Silence of the Lambs

71. For the first time since 1935, it’s legal for beers to list ABV on their labels. It had previously been illegal because Congress feared breweries would engage in “strength wars” and consumers would just want to buy the beer with the highest ABV.

72. The ban on televised spirits ads is lifted

73. Brewery Ommegang builds the first Belgian-style farmhouse brewery in the U.S. since before Prohibition

“To alcohol! The cause of, and solution to, all of life’s problems.”

— Homer Simpson, during The Simpsons Prohibition-themed episode “Homer vs. the Eighteenth Amendment”

74. Sex and the City debuts. The Cosmo explodes. 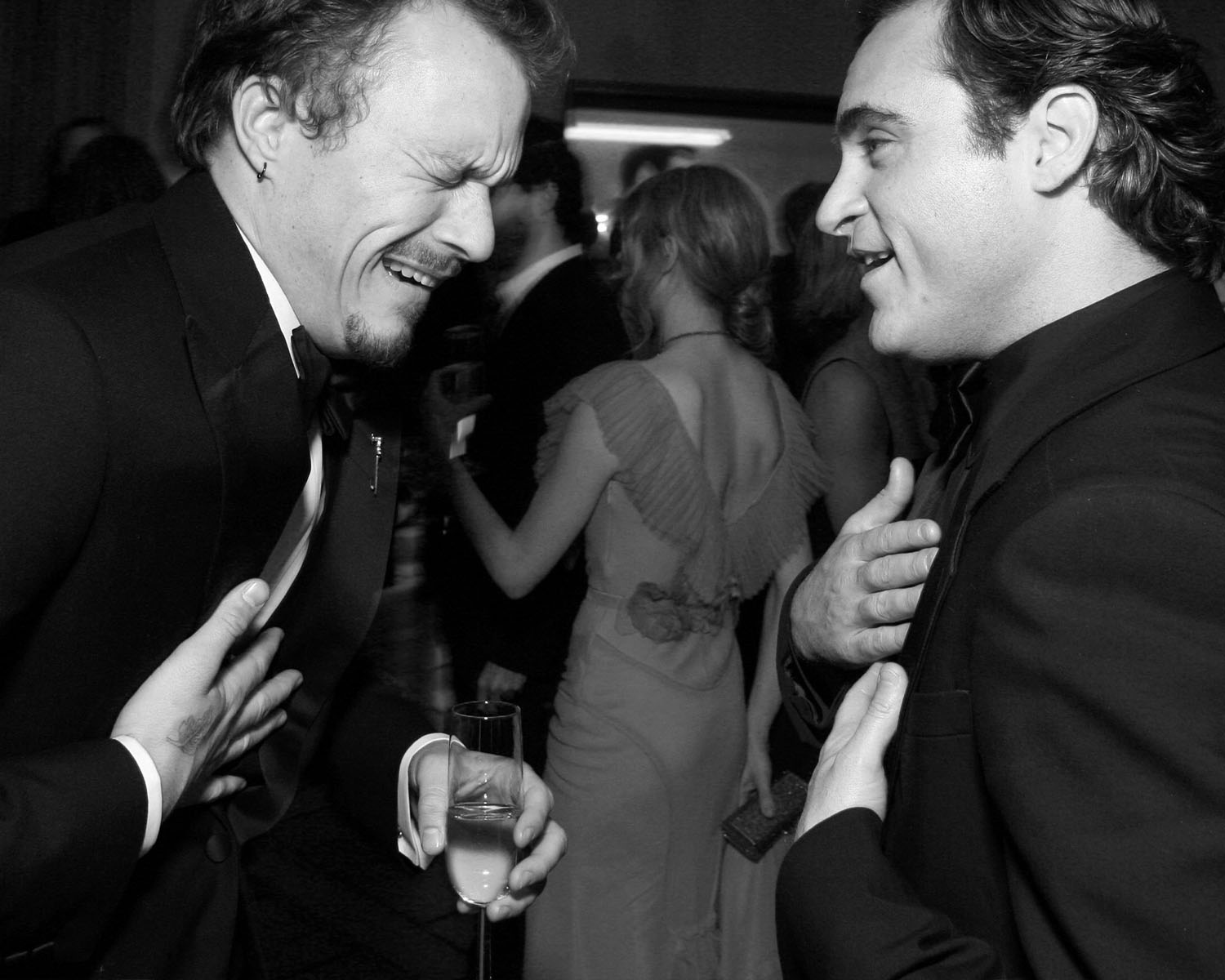 “When Sasha Petraske opened his bar Milk & Honey on a desolate Lower East Side block in 2000, the coming cocktail revival was barely a pie-eyed glimmer in the public’s eye.” – Robert Simonson New York Times / Evan Sung for The New York Times

78. Lost In Translation comes out, and Japanese Whisky begins its march to prominence

79. Tales of the Cocktail, an annual trade conference for the cocktail and spirits industries, is founded in New Orleans

82. Sideways is released, and pinot noir production increases 170 percent over the next decade … while merlot sales slightly decline

84. Audrey Saunders opens Pegu Club in New York, one of the most influential bars in the cocktail revival movement

86. In Granholm v. Heald, the Supreme Court rules that laws permitting in-state wineries to ship wine directly to consumers while prohibiting out-of-state wineries from doing the same are unconstitutional.

87. Dos Equis launches The Most Interesting Man in the World ad campaign

The pickleback is created at the Bushwick Country Club, Brooklyn

88. The pickleback is invented in Brooklyn

89. Jay-Z drops support for Cristal after the brand’s Managing Director Frédéric Rouzaud of Roederer makes racist comments about the drink’s popularity with rappers and their fans.

90. Real absinthe is finally made legal in the U.S.

92. The Hangover is released 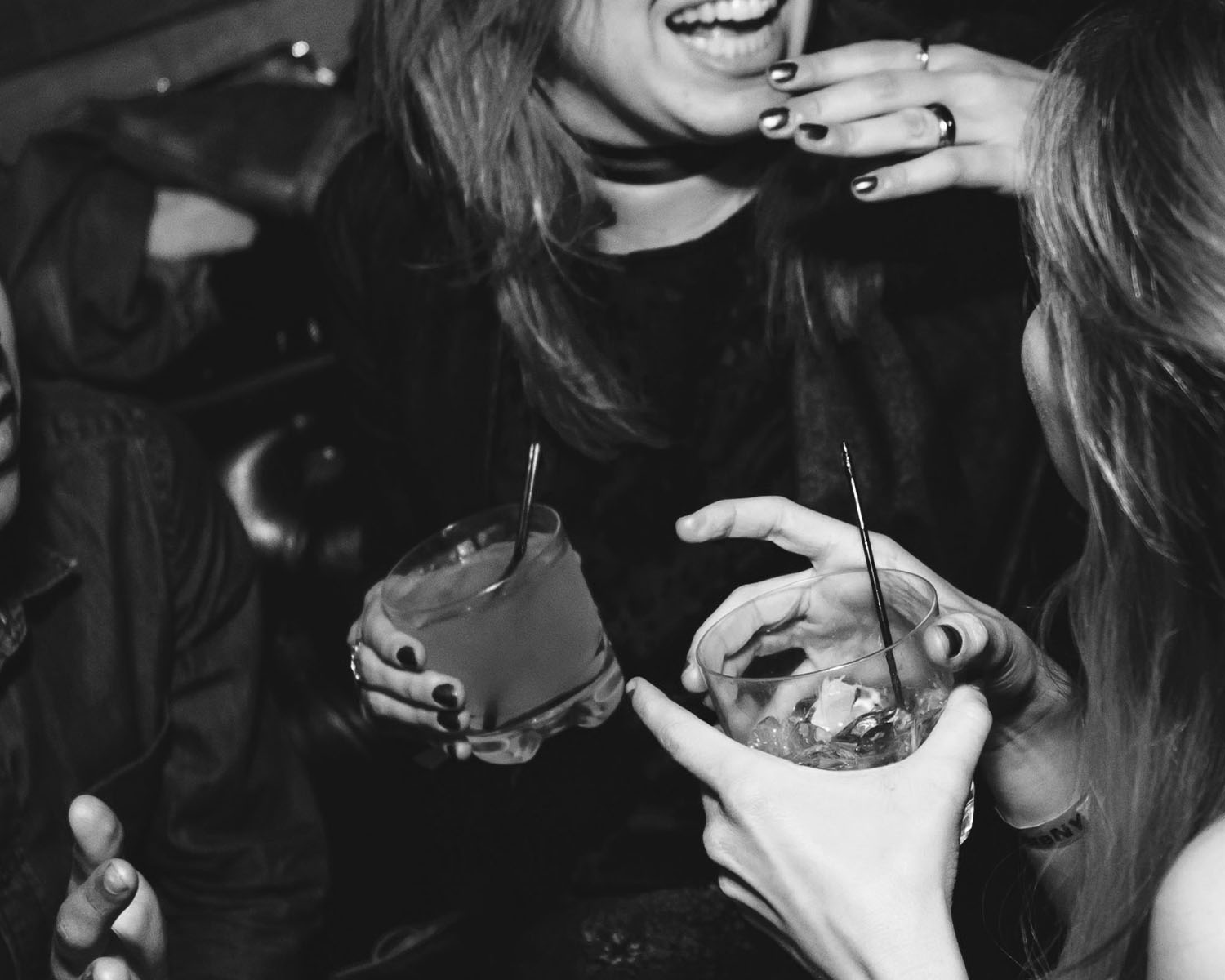 94. Booker & Dax opens in NYC, heralding the popularity of the molecular mixology movement

95. Cachaça officially recognized as its own spirits category

“Do you like wine, little bird? True wine? A flagon of sour red, dark as blood, all a man needs. Or a woman.”

— The Hound, Game of Thrones

97. Swish Beverages launches White Girl Rosé — a blend of Sauvignon Blanc and Zinfandel with an Instagram-worthy label — and is crazy successful thanks to social media. Rosé becomes less of an alcoholic beverage and more of a lifestyle.

99. In the New York Times, Clay Risen writes about the contributions of Nearis Green, the slave who helped teach Jack Daniel about the art of making whiskey. You can read more about his story here.