Dodgers and Kershaw Choke, While Cardinals Rout Braves in Game 5

Plus: the Braves "take several efforts to reduce" the Tomahawk Chop 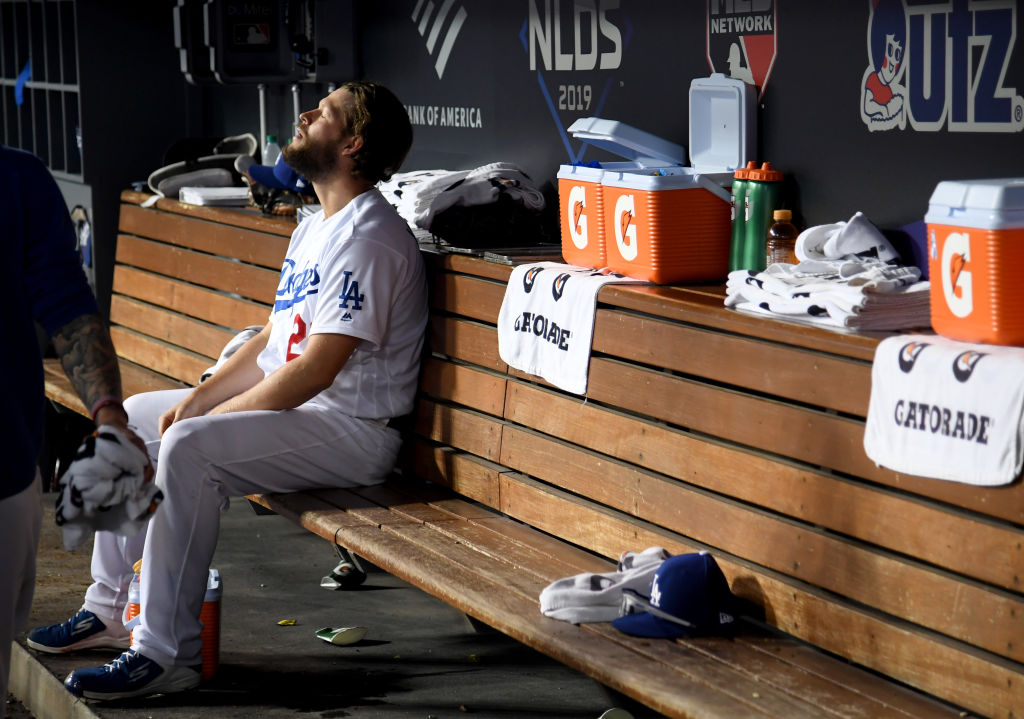 Clayton Kershaw of the Los Angeles Dodgers sits in the dug out after leaving the game after giving up back to back home runs in the eighth inning of game five of the National League Division Series against the Washington Nationals at Dodger Stadium on October 09, 2019 in Los Angeles, California. (Photo by Harry How/Getty Images)
Getty Images
By Bonnie Stiernberg / October 10, 2019 9:58 am

After a questionable decision on manager Dave Roberts’ part to use starting pitcher Clayton Kershaw — who has historically struggled in the postseason — instead of his bullpen, the Los Angeles Dodgers fell to the Washington Nationals in heartbreaking fashion on Wednesday night (Oct. 9), losing in extra innings after Kershaw gave up back-to-back home runs and reliever Joe Kelly surrendered a grand slam to Howie Kendrick.

The 7-3 loss stings for a team that was heavily favored to be National League champs, and after the game, Kershaw took responsibility for blowing the lead, saying, “I let down the guys in the clubhouse. That’s the hardest part every year. When you don’t win the last game of the season and you’re to blame for it, it’s not fun.”

“Everything people say is true right now about the postseason,” he added. “I understand that. Nothing I can do about it right now. It’s a terrible feeling. It really is.”

Meanwhile, the St. Louis Cardinals beat up on the Atlanta Braves to advance to the NLCS, winning 13-1 and setting a new postseason record by putting up 10 runs in the first inning. “I knew we had him on the ropes,” third baseman Matt Carpenter said about Braves starter Mike Foltynewicz. “I’m just trying to take a good at-bat and extend the inning. It felt like we blinked, and it was 10. It happened so fast.”

The Braves also responded to Cardinals pitcher Ryan Helsley’s comments about the Tomahawk Chop, putting out a statement explaining that “out of respect” for his concerns, they would not distribute foam tomahawks to fans and not do the chop or play its accompanying song while he was in the game. You can read the team’s full statement below.

No foam tomahawks at tonight’s game, and some changes to the in-game chop program in response to concerns raised by Cardinals’ Ryan Helsley after Game 1. Statement from the Braves to Yahoo Sports: pic.twitter.com/90NMuEjwje

After the game, manager Mike Shildt’s profanity-laced clubhouse message to his team after the victory went viral when it was live-streamed by rookie outfielder Randy Arozarena. Arozarena later deleted the video and apologized for posting it, saying, “I want to apologize to my teammates, manager, the Cardinals organization and baseball fans for the video I posted tonight after our victory in Atlanta. It was a moment meant to be private. I made a rookie mistake by sharing it on my social media account.”

“The [Braves] started some shit. We finished the shit. And that’s how we roll. No one fucks with us ever. Now, I don’t give a fuck who we play. We’re gonna fuck them up. We’re gonna take it right to them the whole fucking way. We’re gonna kick their fucking ass.” pic.twitter.com/2J7jyJc60O

The Nationals and Cardinals will face each other in Game 1 of the NLCS on Friday night.