Drinking Your Favorite Cheap Beer Could Save the Earth

Bud Light, Michelob, etc. will all now be brewed with solar power

Sunny days and cold beer now go together even better.

The owners of America’s most popular beers (while no longer technically being an American beer company) signed this Earth-lifetime-long contract that commits the company to using renewable electricity from solar power “as long as the sun is shining.” (Note the clever opt-out clause!)

It’s part of the company’s push to use 100% renewable energy by 2021, which is four years earlier than initially expected. “As the country’s leading brewer, we’re committed to driving meaningful change as we announce the largest solar partnership in the world for the beverage industry,” said Michel Doukeris, President and CEO of Anheuser-Busch, in a statement. 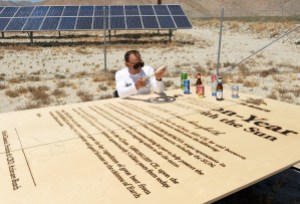 To truly burnish the solar energy tie-in, the signed contract was created by California-based solar artist Michael Papadakis (aka Sunscribes) and, at press time, was scheduled to be signed by Anheuser-Busch’s Doukeris using heliography, a technique that uses mirrors and lenses to focus the sun’s rays.