Review: The Mercedes-AMG C 63 S E Performance — a Wicked Ride That’s Out of Its Depth on the Track

A technical marvel still searching for its niche road

Mercedes-Benz’s AMG division got its start six decades ago, a simpler era when hot-rodding meant boring bigger engines and feeding them with carburetors that spewed fuel like a firehose. AMG earned prestige by working smart and winning races, eventually inspiring Mercedes to acquire the tuner in 1999.

Much has changed since those heady days, not the least of which is the electrification of everything from econoboxes to hypercars. In the interim, AMG has gone from the automotive equivalent of magic pixie dust — think: boutique speed shop — to a scalable formulation that gets sprinkled on everything from Benz’s entry level hatchbacks to their Formula 1 race cars. AMG’s impact on the brand has been so vast, it has become nearly as pivotal to the nameplate’s modern-day identity as Karl Benz and Gottlieb Daimler were to its origins.

If there’s a model in the Mercedes-Benz lineup that overlaps the most attainability with balls-out performance, it’s the C-Class. The entry sedan first earned an AMG badge in the mid-90s, but its high-performance spinoffs didn’t get properly edgy until 2005. That year, the C 55 AMG shoehorned a massive V8 into the humble sedan’s engine bay: the motor was a favorite because it crackled, popped, and roared, earning it a reputation as an enthusiast-satisfying driver’s car that gave the appropriate feels. However, next-level tartness didn’t arrive until the 2011 C 63 AMG Coupe Black Series; that model went whole hog on track-worthy performance by combining a more powerful, rev-happy 510 horsepower V8 with an aggressively tuned suspension. AMG’s flared, lowered, and spoiler-equipped coupe not only looked the part, it delivered on its visual promise in spades; the model is so sought-after nowadays that it routinely trades hands for six-figure sums.

The late, great V8-powered C 63 was an analog beast, but tightening regulations took a serious swipe at its spine-tingling selling points. Tighter sound and efficiency regulations eventually led Mercedes to replace the snorty V8 with a twin-turbo V6. Though lighter than the V8, the new engine was also quieter and less willing to rev. As regulations further tightened, so did Mercedes-Benz’s engineering — which leads us to the latest C 63.

In the pursuit of building a quicker sports sedan while minding its CO2 emissions, Mercedes-Benz turned to the top tier of racing, Formula 1. Borrowing from F1’s playbook of high-strung hybrid powertrains, Mercedes-AMG packed a small 4-cylinder internal combustion engine up front, and an electric motor out back. But this isn’t your average hybrid setup: displacing only 2 liters, the gas engine is the world’s powerful four-cylinder, producing 469 horsepower. Borrowing from F1, the engine is the world’s first production powerplant to incorporate an electric exhaust turbocharger which spools turbines up to 150,000 rpm so there’s no lag when the accelerator pedal is mashed. The EV power is no slouch either, thanks to clever energy management that rations up to 201 horsepower for limited bursts of power, or 94 horsepower continuously. Together, they co-mingle to produce an eye-watering 671 horsepower and 752 lb-ft — pretty remarkable for a family sedan that seats five. 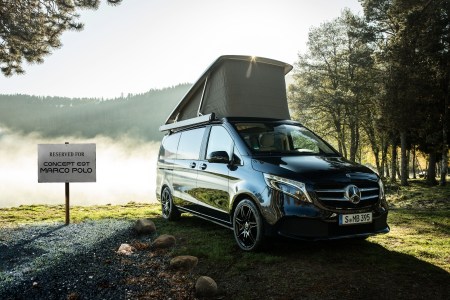 The Marco Polo concept builds on the EQT

But it’s even more complicated than that: electric power at the rear wheels is channeled through a two-speed automated gearbox, with the motor spinning at up 13,500 rpm. In addition to an electronically-controlled rear differential, a mechanical link between front and rear axles can help direct power to where it’s needed most, or disengage the front entirely for “drift mode” to satisfy your hoontastic heart’s desires. Sitting atop the rear axle is a 13.5 kWh battery derived straight from F1, which is designed to charge and discharge rapidly. Adding yet another layer to the performance cake is four-wheel steering, designed to help the C63 corner at low speeds, or add stability on the highway. And then there’s further

“This is the second-most complex road car we’ve ever developed,” one Mercedes-Benz development engineer told us at the C63’s launch event. The most complicated was the Project One, the carmaker’s notoriously delayed (and sold-out) flagship, which bears a princely $2.4 million price tag. The Project One draws even deeper from Formula 1 tech, and thus was infamously difficult to tame for road use. At least in terms of engineering complexity, the C 63 is right behind the seven-figure hypercar — making it more ambitious than any Mercedes-Benz road car before it.

My road test of the C 63 started in Malaga’s city center, where speed cameras and lackadaisical Spanish drivers can make anyone feel naughty for speeding. That urban landscape was a solid place to test the Benz’s EV-only mode, which can propel the vehicle up to 81 mph. Though the battery-only mode is only good for 8 or so miles of driving, the silent propulsion proved smooth and quiet — just fine for getting us out of the city in peace.

As the city streets merged with the highway, the gas engine fired up and augmented the electric motor’s relatively modest power with grunty thrust. Though there’s a refined sounding engine note, sounds can be deceiving: a microphone at the exhaust interprets airflow and produces a corresponding sound that’s piped in through the stereo speakers. Additionally, three external speakers broadcast low frequency sounds to augment the otherwise hushed vocals.

There’s a lot to keep you occupied when you’re cruising on your way to the windy roads; I delved into the AMG section of the multimedia system and counted no fewer than 50 performance and data-related fields that can be live traced onscreen. Want realtime indications of vehicle pitch, slip angle, electric motor torque and transmission oil temp? The truth is out there, man.

Exit Spain’s antiseptically well-paved toll highways onto to the delightfully sinewy Sierra de las Nieves National Park, and the C 63 comes alive with vigor. Sure, the deep bass notes of exhaust are manufactured, but the wallop of power from the gas and electric powertrain is so thumpy you might quickly forget about the artificiality of the sound. There’s loads of grip from the tires, and the distribution of power to all four wheels makes it easy for the C 63 to rotate through corners and power out like a champ, with breathtaking forward thrust thanks all those energy-packed electrons and hydrocarbons.

As capable as this AMG feels on the road, pushing it harder at Ascari Race Resort — say, to 8 or 9/10ths — reveals a different side of its dynamics, and unlike some of its antecedents (see: C63 Black Series), it’s not all good. Inspired by Formula 1’s DRS (Drag Reduction System), a special track mode can enable the instrument cluster to flash a message when maximum boost is available, and hold steady when it’s time to lay off the power in order to maintain optimal battery charge. The boy racer features are neat, but the new car’s weight — nearly 800 pounds heavier than its predecessor due to the hybrid system’s added hardware — limits its tossability and agility on the track. Occasional inconsistent pedal feel make it difficult to gauge braking zones, and it can be difficult recapturing driving flow when one of those lines are crossed. Confidence matters, and when the C 63’s outrageous power is tapped, it’s difficult for the chassis to keep up. A debrief with 5-time DTM racing champ Bernd Schneider yields the expected raves about the car (“It’s perfect!”), but then again, the speedy German is clearly being paid for his enthusiastic services. When I bring up the at-limit handling though, one response catches my attention, namely his inference that Black Series models are the only real AMGs truly intended for the track.

Yes, the Mercedes-AMG C 63 S E Performance is a wicked weapon for the road, capable of delivering tenacious handling and lurid speed. But I didn’t find its track performance nearly as satisfying as I had hoped, primarily because what it gains in time and space-melting power, it lacks in chassis agility and nimbleness. Its Formula 1-derived tech is certainly a draw for many, and it is remarkable how Mercedes engineers have (mostly) successfully orchestrated the car’s intricate engine and EV systems. But a true track toy it ain’t, begging the inevitable question we must all ask: Will Black Series AMGs eventually go down this high-performance hybrid rabbit hole? We can’t wait to find out.