Rule #1: Make sure it’s actually open before hitting the road 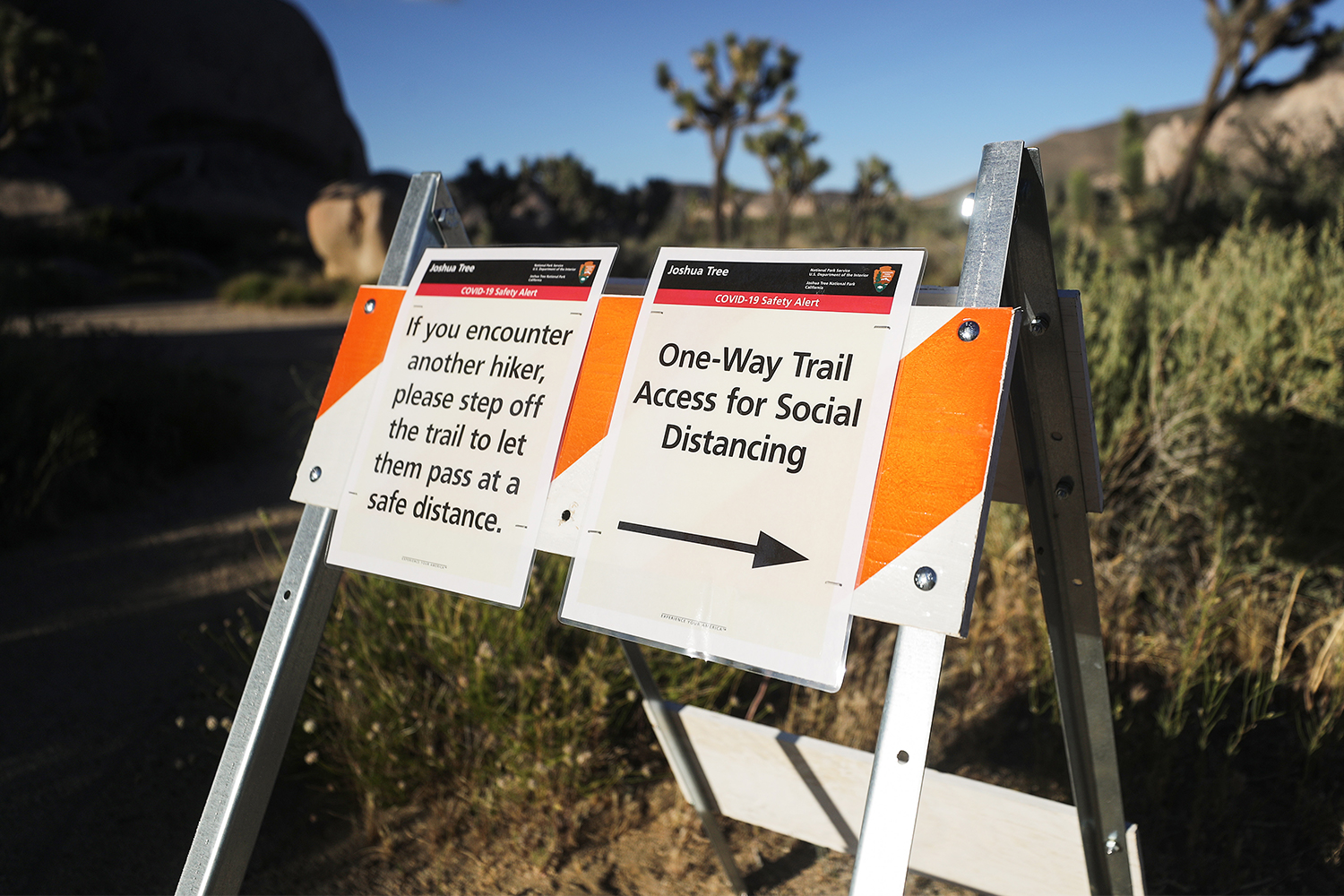 Expect to see social-distancing signs, like this one at Joshua Tree, at all national parks.
Mario Tama/Getty Images
By Alex Lauer / May 22, 2020 9:10 am

The state of America’s national parks during the COVID-19 pandemic has been, to put it lightly, a shit show.

First, the NPS waived fees because everyone thought it was good to get outside, but then parks were overcrowded against CDC guidelines and many were forced to close, and later, because tourists with selfie sticks weren’t there to scare them off, the animals started partying. But that rager to rival “Bare Necessities” couldn’t last forever, and as states begin reopening, many of the parks are opening their gates as well.

In May, closed parks have increased access bit by bit, following a directive from President Trump in late April. But the recent phasing in of some of the most famous sites, such as the Grand Canyon and Yellowstone, has made this Memorial Day weekend a ceremonial reopening celebration of sorts. For those who have been lamenting a lost summer, the return of national parks is a hopeful sign for a return to normalcy, at least in the great outdoors.

Yet, there are many who are critical of the rush to reopen, and rightly so. Even though precautions are being taken, and the CDC has approved the National Park Service to open “on a park-by-park basis,” we’re already seeing cracks in the plans once again.

As CQ Roll Call reported, the Department of the Interior, which oversees NPS, isn’t offering data on COVID-19 cases in the Park Service in line with other departments. And while officials scramble to explain the withholding, at the parks themselves, there have been at least two bison attacks this week at two separate sites, with one at Yellowstone happening because a woman went against park rules and approached the animal — which doesn’t bode well for visitors following newly imposed guidelines.

In short, if you head to a national park this Memorial Day, it will be at your own peril (from the lack of a cohesive reopening plan to a lack of masks). That said, it is entirely possible to visit these parks safely — for you, your fellow visitors, the staff and the animals. To help, we reached out to some of the National Park Service staff who previously shared their dos and don’ts for visiting parks during pre-pandemic times, which included … staying away from bison.

Here’s your tip sheet for heading to national parks as they reopen. If you can’t follow these guidelines, maybe stick to your local greenspace.

You’re not safe just because you’re outside

Some people seem to think that because they’re in the open air, they don’t have to wear a mask, but that is a gross misconception. “Being outside doesn’t prevent viral transmission,” said Karen Garthwait of Arches and Canyonlands National Parks, both of which will begin reopening on May 29. “It is essential that visitors continue to respect social distancing — between each other and with park staff — and to #recreateresponsibly to protect public health and park resources.” As part of their reopening plans, parks are encouraging visitors to wear masks (the rangers certainly will be wearing them), so while you may be visiting in order to get some fresh air, anytime other people are around — even if they’re six feet away — mask up.

First off, as the CDC recommends, make sure to pick a park that’s close to your home so you don’t accidentally spread COVID-19 to a new community. But even if it’s just a 15-minute drive, check the specific park’s website before you leave home. “Each park is developing its own strategy that reflects their local circumstances,” said Garthwait. “I expect this may cause visitors some frustration and confusion, unfortunately, since you can’t just assume that what’s happening in one park applies to others. You have to take the time to check each park’s website for current information.” Like the Grand Canyon, some parks may only be open on specific days, and some may close suddenly or not even be open yet, so it’s important to check in on the day of your trip.

Not all facilities will be open. Plan accordingly.

Visitor centers will remain closed, so Sally Hurlbert, management specialist at Shenandoah National Park, which will start to reopen on Saturday, recommended downloading your park’s app beforehand so you have access to maps and other pertinent information. Campgrounds are more conditional, so double-check to see if your park’s overnight facilities are open. But as Garthwait said, even access to the park can change on the fly: “If parking lots fill up and crowds start to form, we may have to close the gate for a few hours until those crowds disperse. Visitors can monitor the park websites and social media feeds for the latest updates.”

Don’t force your choices on others

Hurlbert brought up a number of other park guidelines, which include not visiting if you feel sick, taking turns passing others on trails and other narrow spots, avoiding crowded areas and taking turns at heavily trafficked areas like waterfalls and scenic overlooks. All of these can be distilled into one main code of conduct: don’t infringe on anyone else’s right to experience the parks safely. Even if you don’t want to wear a mask, even if you don’t think you have COVID-19, even if you don’t want to social distance, other people might feel differently. Don’t ruin the experience for everyone.

While we’re currently navigating what feels like a different world from where we were nine months ago, this quote from Sandra Snell-Dobert of Black Canyon of the Gunnison from last August still holds true:

“As public lands come under more pressure to facilitate experiences for growing populations, it becomes imperative that the visiting public respect rules and regulations that are created for the safety and well-being of them as well as the resources they came to see. Our national parks are not meant to serve all needs and desires of the public, but rather to preserve the opportunity to experience the places as they are.”

Right now, our national parks are in a fragile state. Go forth, but go forth with patience and empathy, or they will close the parks again. Don’t think they won’t.