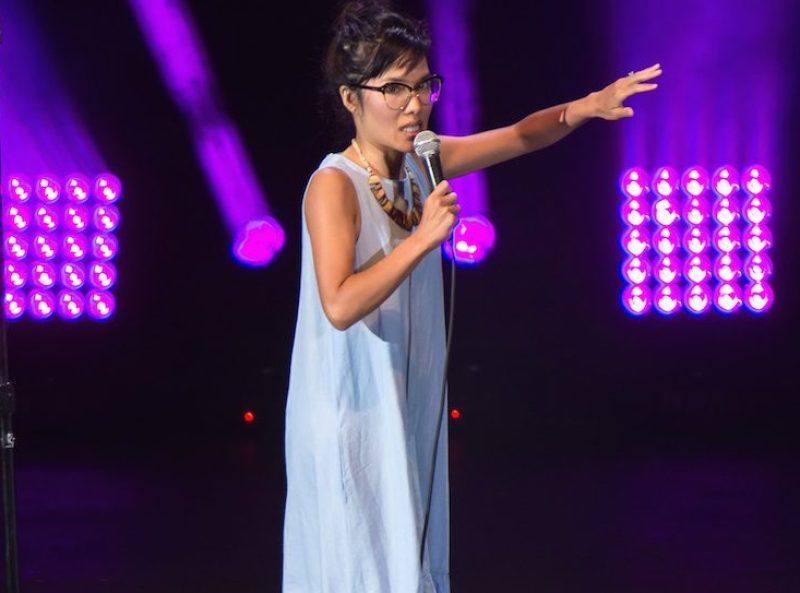 On May 5, Netflix released Baby Cobra, comedian Ali Wong’s first full standup special, which initially drew attention because it was filmed not long before she gave birth to her first child. (At one point she casually observes, “I don’t know if you guys can tell but I’m seven and half months pregnant.”) It quickly became a sensation, because it was damned funny. Simultaneously, ABC’s Fresh Off the Boat (for which Wong writes) was renewed for a third season. And Wong was also cast on another ABC sitcom, the recently premiered American Housewife.

She became a star at age 34 in the most unexpected way because, as Wong notes of female comics, “Once they do get pregnant they generally disappear.”

The New Yorker‘s Ariel Levy followed Wong during part of this remarkable chapter of her life, as her professional career exploded and she took care of a newborn. Levy reports Wong works a brutal schedule: “In addition to shooting the new sitcom—American Housewife, about a stay-at-home mother trying to adjust to life in Westport, Connecticut—and writing for Fresh Off the Boat and getting up at five-thirty to breastfeed, Wong goes out most nights, after she and [her husband] put [their daughter] to sleep by singing ‘Baby Beluga’ in unison, to perform at local clubs.”

Wong says she needs to do these performances—”That’s the only way I write: onstage”—and doesn’t announce the gigs, as she believes the best material results from the desperation of unsuccessful appearances. Generating material is a slow process: Wong estimates she gets something useful from one out of every 10 sets. (Before all her current obligations, she used to perform up to nine sets a night.) Here’s how Levy describes Wong going out to perform following dinner:

“After the bánh tráng, Wong drove half an hour from her house to Pancho’s, a place in Manhattan Beach that is part Mexican restaurant and part music-and-comedy club. There were about a dozen people in the audience, mostly male, including a table of four very buff guys in tight T-shirts. ‘You all into gel and kettlebells?’ Wong asked them from the stage. She was wearing a brown jumpsuit that she had put on earlier because it was convenient for breastfeeding. ‘Did you guys all see each other and say, ‘We should hang out, because our arms look the same’?’”

To read the full article on Wong, which includes tributes to her by fellow standups Amy Schumer and Bill Burr, click here. Below, watch her performing in 2012, years away from national recognition but already extremely funny.