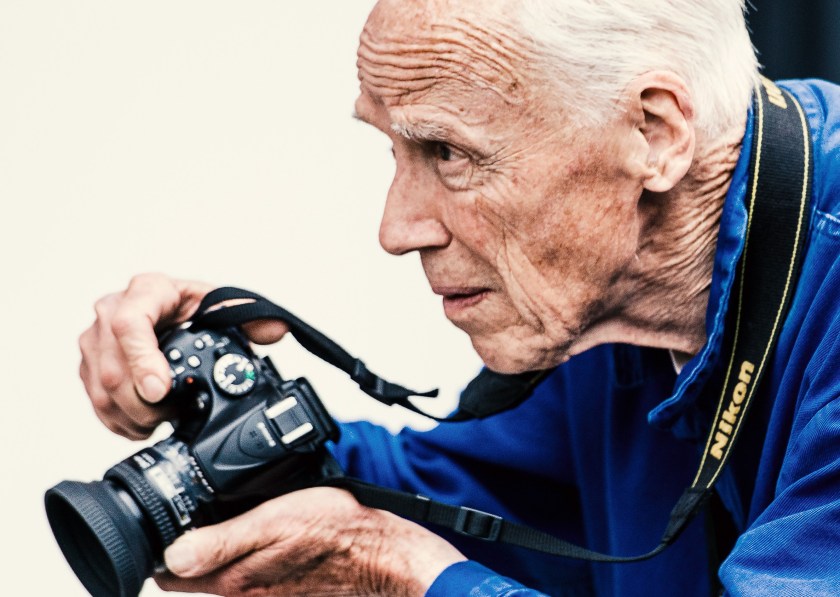 “Cunningham is as attuned to the bourgeois as he is to the avant-garde, and the mundane accessories of day-to-day life are as exalted in his photographs as any platform shoe or deconstructed bustle. Balaclavas, shown in collage, hint at the martial aspect of New York street life. An umbrella, flipped inside out by the wind, becomes an abstract sculpture; a snow poncho, wrapped around its wearer’s head, is a plastic exoskeleton that will eventually be shed. He is drawn to anything natural: children, gardens, parks, animals. (His column has featured a parrot, a duck, a python, a monkey, a tortoise, and many dogs; not long ago, he took a train all the way back to Long Island when he realized that some black irises he had just seen at Old Westbury Gardens perfectly echoed the filigreed lines of both a 1900 cut-velvet Worth gown and some nearby wrought-iron gates.) He has a thing for curbside puddles. ‘It’s a little ridiculous, but a fierce snowstorm is wonderful!’ he said. ‘Oh, it’s marvellous—it just rearranges the whole fashion scene when the wind blows down from the top of the Avenue. Six-, seven-hundred-dollar shoes, and they’re all in the slush—hey, it’s pretty peculiar!’ He went on, ‘Nothing like a good blizzard, kid, and you got pictures!’”