New England does have some incentives to bring in Kaepernick as Tom Brady's backup.

Over the weekend, Colin Kaepernick’s lawyer said his client still wants to play in the NFL and would be a good fit with the Super Bowl champion New England Patriots.

In an interview with CNN, attorney Mark Geragos said it would not surprise him if New England makes a move for the 31-year-old quarterback within the next two weeks.

Geragos did mention Kaepernick may have other suitors (Carolina Panthers, Seattle Seahawks), but it’s certainly notable he brought up the prospect of the Patriots bringing in his client to back up Tom Brady because it is not the first time he’s said something along those lines.

While it remains a Hail Mary longshot that the Pats will bring No. 7 into the Foxborough fold, here are seven reasons why it would make sense for them to do so.

Reason #1: Brady and Backup Brian Hoyer Aren’t Getting Any Younger

It’s been well-documented that, at least by football standards, 41-year-old Tom Brady is an old man. It’s less-well-known, but equally as true, that his backup, Brian Hoyer, is also getting up there in years and will turn 34 this season.

With no other viable quarterback on the roster (the Patriots drafted Danny Etling out of Louisiana State University but he did not take a snap all season), the team needs to have someone else on the roster who could take the reins if/when Brady takes his Super Bowl rings and rides off into the sunset. 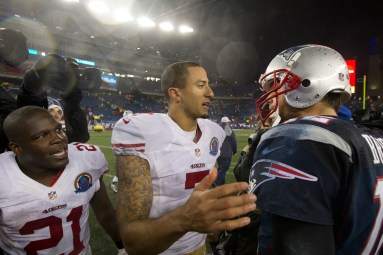 As he’s proven time and again when given the chance to start, Hoyer is not that guy and his age only makes that even more apparent. Could Kaepernick be that guy? Who knows at this point – but at least he’s shown in the past that he could be.

Reason #2: It Would Help the Team’s, and Owner Robert Kraft’s, Image

Deserved or not, The Patriots, and Brady and New England owner Robert Kraft in particular, have become inextricably linked with President Donald Trump.

Despite that, even though it’s a dyed-in-the-wool blue state, the Patriots are beloved in Massachusetts. Outside of the Commonwealth, however, that’s not the case and it clearly is not just due to football reasons.

While adding Kaepernick wouldn’t completely erase the narrative that the Patriots are one of Trump’s teams, it would certainly add a storyline that flies in the face of it. For a team that is becoming more valuable by the year and an owner who has been an advocate for social justice, that would certainly seem like a desirable outcome.

Reason #3: Belichick Has Been Impressed By Kaepernick In the Past

Seven weeks before he quarterbacked the San Francisco 49ers in the team’s most recent Super Bowl appearance in his first season as a starter, Kaepernick completed 14 of 25 passes for 221 yards and a career-high four touchdown passes during a 41-34 victory over the Patriots in Foxborough. When Belichick and the Pats took on Kaepernick in 2016, the longtime coach shared what he remembered about the mobile quarterback’s game. 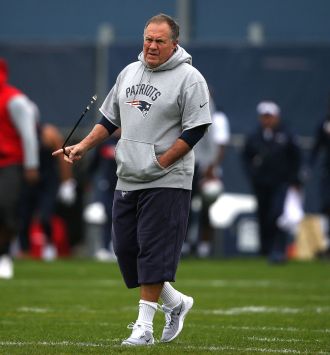 “I think he’s a very dangerous player back there,” Belichick said. “It’s a different offense, so some of the things are different. But he can hurt you in a lot of ways. He’s got a good arm and throws the ball all over the field. He’s athletic and can extend plays. He can also run for yardage. On film, it looks like he makes good decisions.”

Obviously, Kaepernick isn’t the same player he was in 2013 or even 2016, but there’s reason to think Belichick has liked what he has seen in the past enough to give Kap a shot.

As they’ve shown by bringing in players like Corey Dillon and Christian Peter in the first part of their dynasty and Aaron Hernandez and Josh Gordon in the second, the Patriots are willing to bring in players with off-field issues as long as they can play ball on the gridiron.

That’s not to say Kaepernick’s off-field baggage is even in the same area code as that of a sad soul like Hernandez, but merely illustrates the point that the team is not afraid to roll the dice where some teams won’t.

As for the media circus that Kaepernick would bring, most thought Tim Tebow would have generated plenty of publicity when he was with New England in training camp in 2013. He didn’t because the team is able to shut out the noise and get colorful players to deliver black-and-white answers like no other. You probably didn’t even remember Tebow was with the Pats, right? 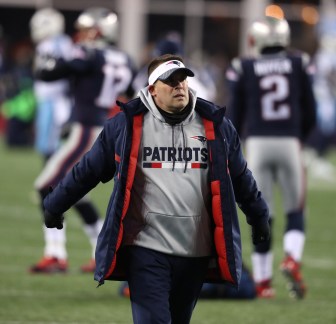 While he was in charge of the Denver Broncos, McDaniels, New England’s current offensive coordinator, used a first-round draft pick on dual-threat Tebow. Considering the former Heisman winner is now playing pro baseball, that pick obviously didn’t work out in the long-term, but there were a few seasons where Tebow performed like a serviceable NFL quarterback.

More recently, McDaniels was reportedly enthralled with another former Heisman winner – dual-threat Lamar Jackson – and worked him out privately before the NFL Draft in 2018. Though Jackson ended up being picked by the Ravens, it’s clear McDaniels is intrigued with utilizing passers who are also threats in the running game.

Up there with checking down, running pick plays, and trading down incessantly in the NFL draft, one of the top plays in the Patriots’ playbook is finding value whenever possible. Fresh off pocketing seven or eight figures as part of his settlement with the NFL – with some estimating as much as $100 million – Kaepernick likely won’t be looking to break the bank in a major way on any NFL contract he signs. 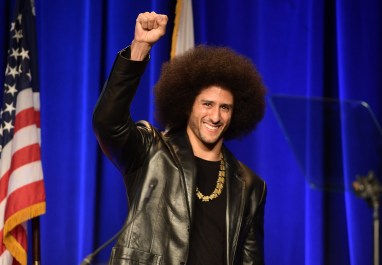 And, even if he is and the team pays a little more than desired to ink Kaepernick, profits from all the No. 7 Nike jerseys the team would sell at the team pro shop would likely more than compensate for the overpayment.

As an added bonus, the team wouldn’t have to spend any of its beloved draft capital to acquire a potential successor to Brady as adding Kaepernick at quarterback would only cost the team money, not picks.

Reason #7: Kaepernick Took on Roger Goodell and the NFL – and Won

With the aforementioned settlement following a legal battle with the NFL that was fought for months, Kaepernick emerged from a fight with the league victorious.

Thanks to the league and commissioner Roger Goodell’s handling of the Deflategate scandal and the four-game suspension Brady was handed because of it, the Patriots are not big fans of the league office or the commish and team personnel and players were likely pleased with Kaepernick coming out on top (even though it cost Kraft some money). Brady, Belichick, Kraft, and the team in general hold grudges – a team-owned website debunking Deflategate is still live on the web today – and there’s no doubt they’d love to have another player on the roster who sticks in Goodell’s craw.

It’s an inconsequential reason to be sure, but as we saw in Super Bowl LII with the benching of Malcolm Butler for reasons unknown, Belichick isn’t above a little pettiness. Brady, who has made it a habit of targeting defensive backs who have talked trash about him in the past, certainly isn’t either.